It’s currently 2am and I can’t sleep.  I really thought I was going to sleep the whole night but I woke up around midnight and couldn’t go back to sleep.  I thought I should do some productive things so I packed up my stuff, uploaded some pictures and now I’m blogging.  Some people sleep well after a marathon, and then there’s me.  There’s no sleeping for me.  This is not news. 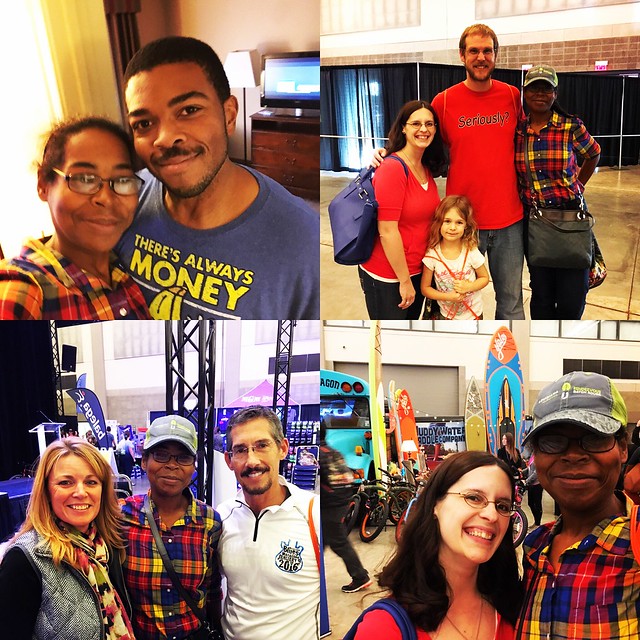 The Louisiana Marathon weekend is one of my favorite weekends of the year.  There is just something about this race that I just can’t get over.  The atmosphere is fun, the people are nice and the finisher festivals on both days is amazing.  It’s just a great place to be.  There is a race for everyone.  On Saturday there is a Kids race (1.2 miles), 5K and quarter marathon (6.55 miles). 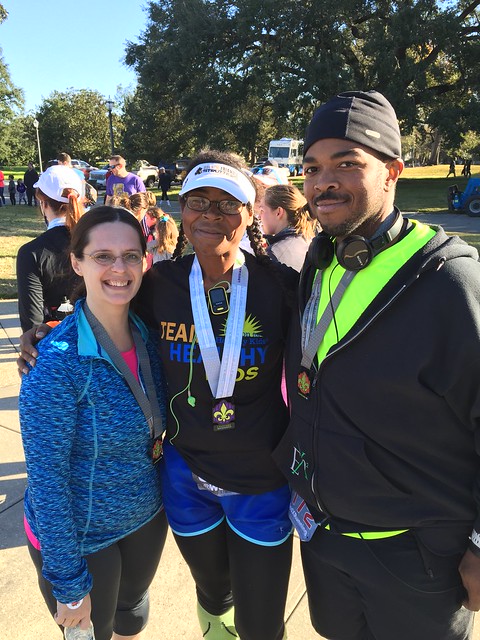 Willie and Missy ran the 5K and I ran the quarter.  I usually run the 5k but I went for something different this time.  I really enjoyed it.  The weather was a little chilly but that’s pretty standard for this race. I have to say I am super proud of Missy for running this race. She’s been working on hard on improving her running and she’s doing great! And Willie is working on get back to where he was last year one day at a time. He’s working and training too. Willie and Missy are training hard for Rock n Roll Dallas in March!

I hadn’t been running due to my injury so I was kind of nervous about it.  But I felt great and I was running by feel.  I didn’t want to push my legs too hard because the goal was to make it through the marathon the next day.  There are two hills on the course which is one overpass.  You go up and on the return you have to go back.  This didn’t bother me at all.  I was keeping a very good pace and I was happy.  My running buddy kind of made me a little upset because it would stay clipped together.  I wasted a lot of time playing with that.  The course was ran with the 5k group for the first 2 miles and then we went on a extended preview of the following days courses.  These are old Louisiana roads which means some of them were not in great condition but I guess it doesn’t matter when you’re running down beautiful tree lined streets.  There were some moments I had to watch my feet but it didn’t stand in my way. 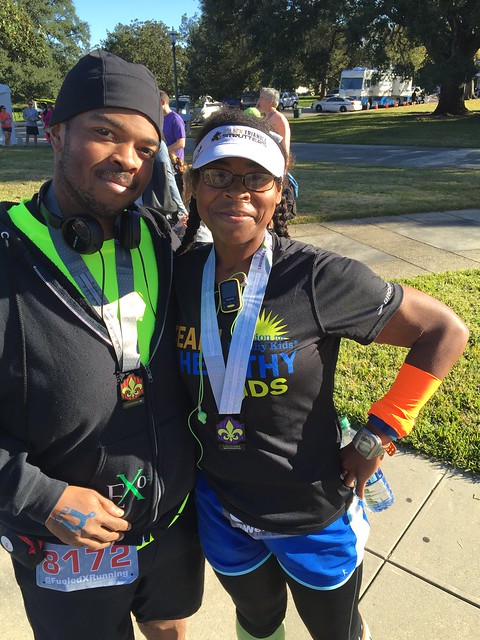 I finished the race in 1:06:27 officially and I was thrilled because my pace was something like 10:08/mile.  After not being able to run without pain for almost a month, it was nice to have a good run.  Taking that time off from running was really what I needed. 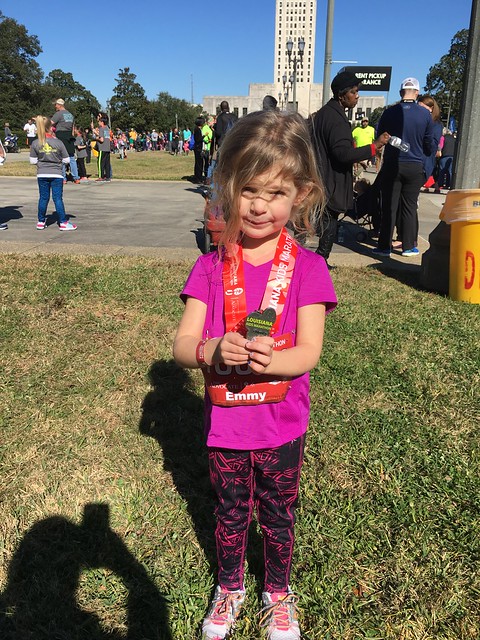 And then we watched Emmy run her kids race. 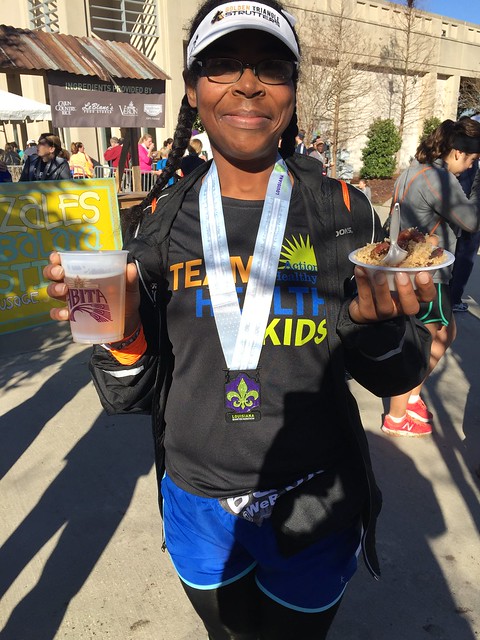 And the we enjoyed everything at the finisher festival.  There is a finisher festival on both days of the Louisiana Marathon weekend.  It’s really great.  There is live music, tons of food and beer on tap.  It’s a great way to hang out with family and friends.  This is the best post-race celebration I’ve been to at a race. 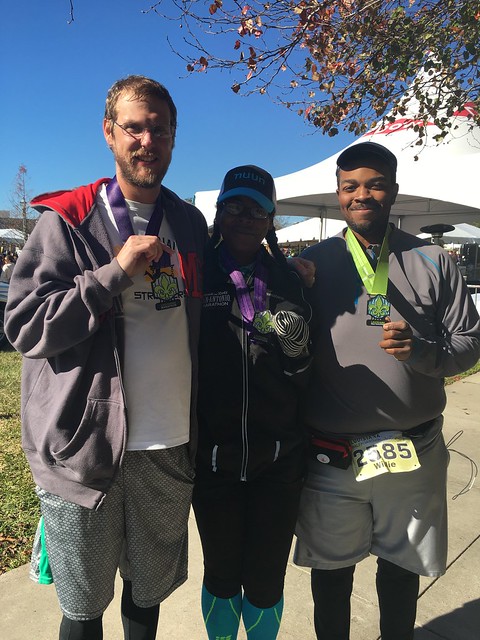 And then yesterday I ran the marathon with Tyson and Willie ran the half marathon.  We didn’t have a before picture because things were kind of cold and rushed before the race.  Sorry I missed that part.  Tyson and I were going to for a sub 5 marathon.  This is the course where I set my marathon PR last year.  I wasn’t sure if it was going to happen because of my tendonitis in foot/shin but I was going to give it a try.

This course is mostly flat and it’s beautiful.  The course takes you past the lakes, onto LSU campus and around the football stadium. I had s quiet chant of Hotty Toddy when we ran around the campus.  I really wanted to say it louder but there was less Ole Miss people running the race this year.  The wind was kind of kicking it too.  Tyson and I were ahead of pace and running really good.  I did the normal health check at mile 12.5 and we were both feeling fine. 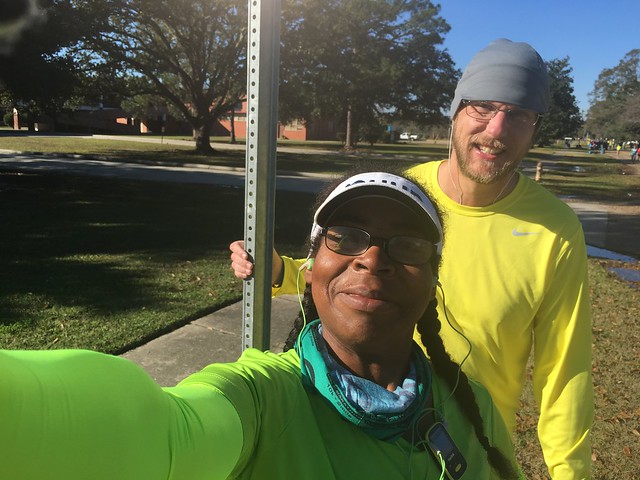 And then Tyson started feeling the pain.  Ironically, Tyson is suffering from the same injury that had me at my marathon two weeks ago.  I didn’t know it though until that moment.  We slowed the pace a bit after a restroom stop but Tyson was having a hard time.  At mile 15-16 we were walking, hoping to loosen up his foot.  It was cold and I was starting to tighten up.  I told Tyson I would stay with him but I felt my body doing some weird things.  When my body temp drops during a run, it doesn’t always end up being something good.  I had to make a really hard decision to leave Tyson.  It was so hard for me.  I debated it and questioned it several times, but I asked him if it was OK if a left.  He told me several times to keep going but I stayed with him but at mile 18 I decided to go. 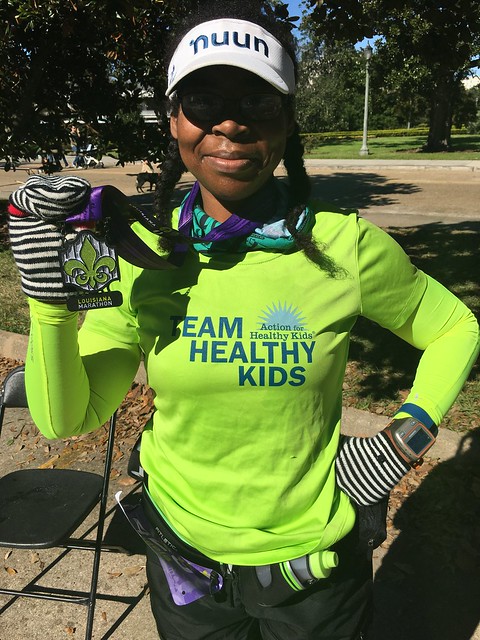 I ran/walked the rest of the way and tried to have a good time.  I had to turn on my music for the first time around mile 20 to get me out of my head.  We were on pace for a 4:45 marathon and I know we could have done it.  It just wasn’t in the cards for us.  I continued on and crossed the finish line at 5:19:06.  I AM happy with this finished because 1.  two weeks ago I didn’t think I would be able to run this race and 2.  I finished it and still had a great time.  It’s about making it to the finish and seeing it through to the end.  Just finish.

People write me all the time saying they don’t want to run because they feel like people are going to make fun of them, or laugh at them on course.  That is absolutely not true.  The running and racing environments are the most positive environments out there.  Everyone is aiming for the same thing; everyone wants to finish the race.  People will encourage you, run with you, walk with you, high five you and just be there for you.  This is what one really great thing about the Louisiana Marathon.  Everyone is friendly.  People sit out in their front yards to offer you support and encouragement.  The town really embraces this marathon.  Things like that make a different.  The police force was amazing and so encouraging too.  And the volunteers, were perfect.

Yes there were so hiccups along the way like way too tight men’s participation t-shirts and I got irritated they were taking down signs too early.  (When I was coming past the mile 25 mark they were taking down the sign and there was still 2 hours left in the marathon.  For someone running a marathon and not seeing a mile 25 sign, that will mess you mentally.  There were still people 2 hours behind me who may have needed the hope that sign would offer and it wouldn’t be there.  It made me angry.)  But the heart of the race is still there and I just really love it.  If you get a chance to run this race, you should.  You will not regret it! 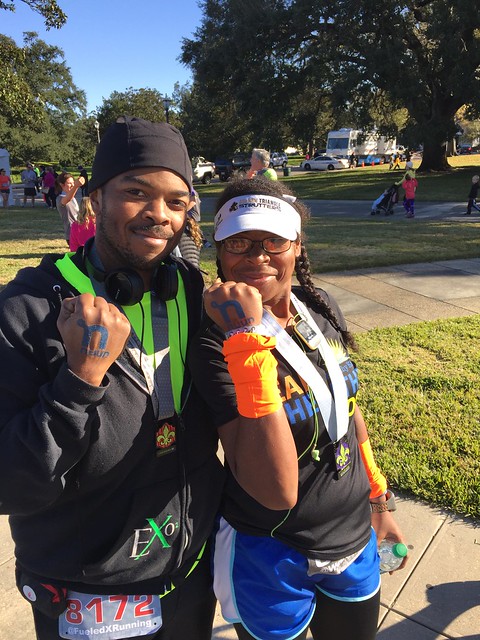 Big thanks to my sponsors for being so awesome.  Team Healthy Kids kept me motivated, Nuun Hydration kept me hydrated, Headsweats kept my head in the game, Honey Stinger kept me fueled during the race (and it was great to have this out on course) and low fat chocolate milk is aiding in my recovering right now.  These are things I use in my every day training and I’m glad to be affiliated with all of these groups.  Check them out and run on!