If you didn’t read my Rock n Roll San Diego 5K recap you definitely should go back to start there.  The Rock n Roll San Diego Marathon was part of my quest and was my 11th state to capture on the way.  I was very excited to be running California and to spend time with my best friend, Missy, who was running the half marathon. 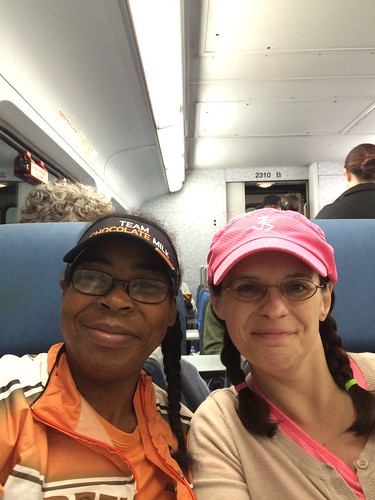 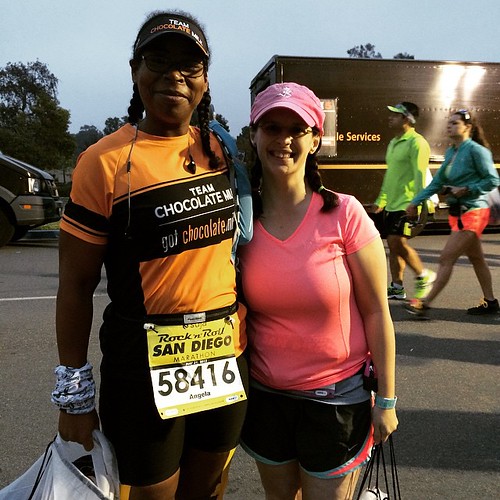 We arrived in plenty time to get our bags to gear check and not be too rushed before the start.  The marathon started at 6:15am and the half started at 6:50am. 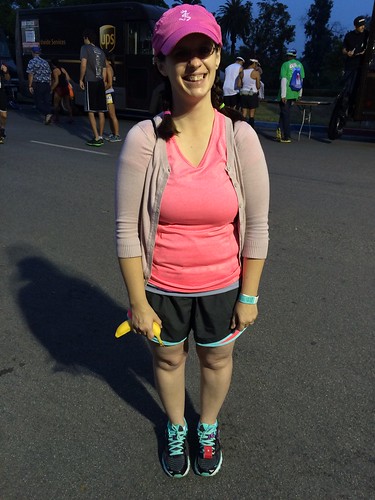 Missy was a little cold so she became a preppy runner.  She needed to wear her cardigan before the start of the race.  I enjoyed teasing her!

When it was my time, I said my goodbyes and headed to the corrals. Everything was good until they said everyone who was running the marathon needed to be in the corral right now or they couldn’t run the marathon.  People panicked and started pushing their way to the front.  I took an elbow to the chest by someone who was scared and it kind of knocked the wind out of me.  It was all a misunderstanding because people didn’t realize they just meant you needed to be at the start line at that moment, if not you would be forced to run the half marathon.  The marathon and half marathon courses were different for this race.

I started off the race a little cautious.  It was kind of humid and nothing like the day before.  I didn’t have any goal here but to finish.  I thought I would try to do a 5:15 marathon and stayed with that pace for the most part.  I did stop to take a lot of pictures though.  I was having a good time and thought running in California might not happen again so I wanted to enjoy the moment. 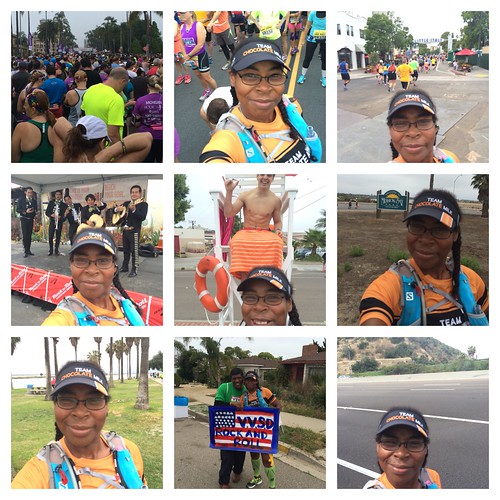 I stopped everywhere.  I stopped in Old Town with the mariachi band.  I stopped at the Little Italy sign.  I stopped at Mission Bay.  It was a great time.  I was about 10 minutes ahead of pace so I was doing really well.  I decided to run with my hydration pack because I had a moldy bottle incident the night before.  No matter how much I cleaned those bottles, I knew I wouldn’t be able to get past it.  I ditched the race belt and ran with the hydration pack.  Thank goodness for Willie because he made me bring that pack just in case.

I was having a great time.  The sun started peaking through the clouds around 10:30 am which made it a little hotter.  It also didn’t help that is about the time I hit the highway section of this course.  The course was hilly but nothing I didn’t think I could handle.  Everyone kept telling me to look out for this one highway section. I was happy I was staying above pace until I got to the highway section.  It was the worst. It was one big continuous HILL.  At the point, I lost my pace because I just walked.  Everyone was walking. Besides the hill, the highway was slanted which would have been murder on anyones IT band. 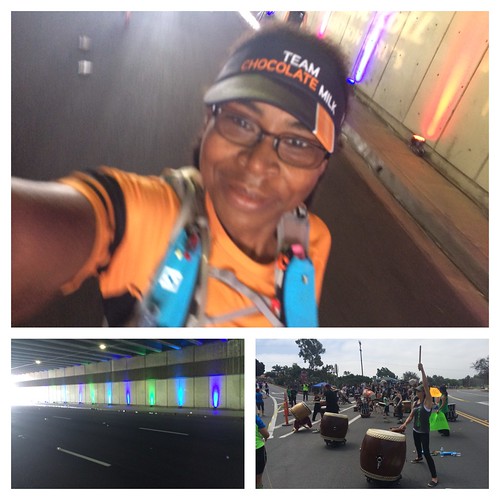 I really hated that I lost my time but it was really about having fun.  The moment I was able to run again, I picked up the pace.  It was warmer but I didn’t mind.  This girl was fueled by fig newtons and I was ready to run.  And then we hit the tunnel again with the DJ.  It was nice to have a little bit more fun before the race ended.  The tunnel had flashing lights that went with the music. 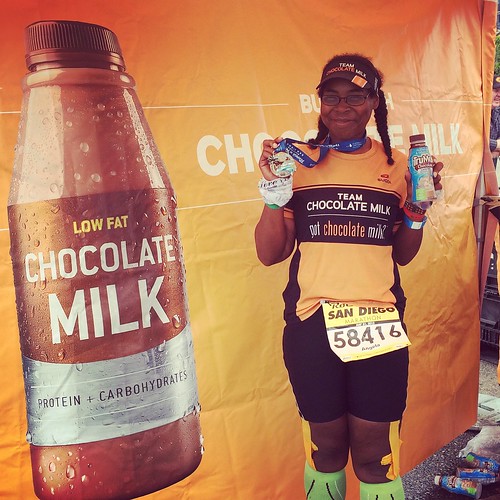 I finished the race in 5:36:49.  By the time I reached the end, I was spent.  I was definitely ready for some lowfat chocolate milk.  It was definitely well deserved! I’ve been taking my race recovery a lot more seriously.  It has to right carb to protein ratio for recovery. This has been a LONG marathon haul for me and this was a great finish for my marathon travels. 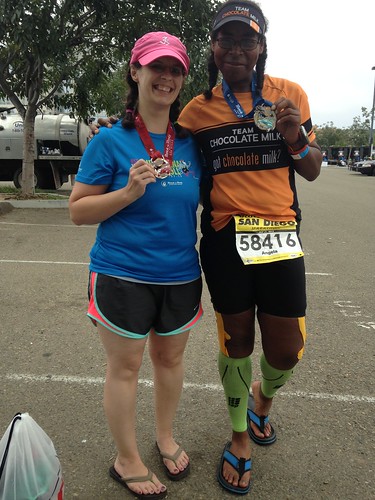 After I finished, I went to find Missy who met her goal. I am wicked proud of her for even attempting to do this. I got all teary eyed when I told her this but I really mean it. It’s really great to see people doing things they never thought they would do.

This was a very pretty run with excellent course support.  This race exceeded my expectations.  I really got to see a lot of the city and the people were so nice.  The down point was running on the freeway for almost 3 miles.  This is the largest Rock n Roll race put on so it was really nice to see how efficient everything was. 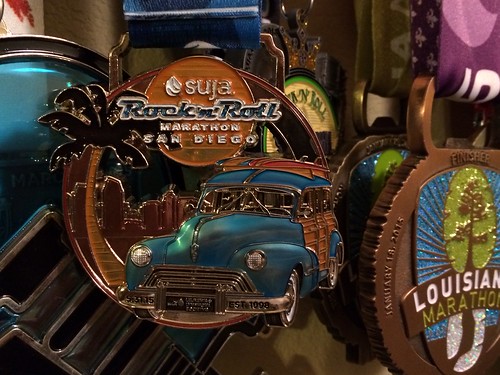 The medal was very nice… 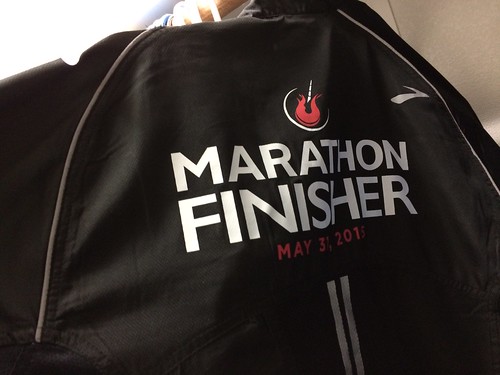 And I got a great marathon finishers jacket.  I didn’t like I had to walk a mile after running a marathon and go up a flight of stairs to get it, but I guess in the end it doesn’t matter.  It was a great race that I would recommend to everyone. 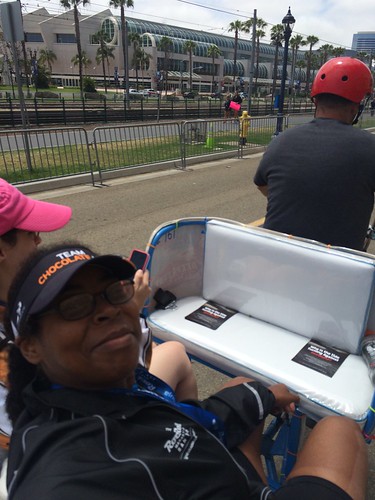 When we were done, we took a pedicab down to Little Italy to eat some pasta!  It was a great time!