I love this race because it’s a pretty course, the people are friendly and it’s just an all around good time.  I am so happy to share this race recap with you because this was a very positive experience for me. 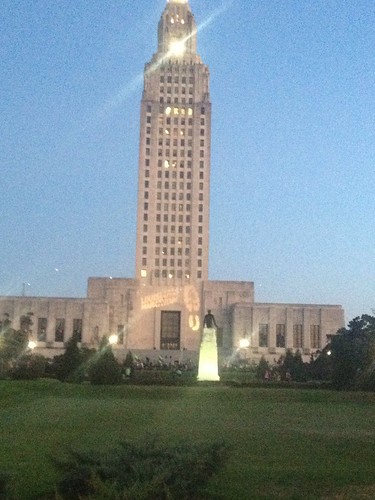 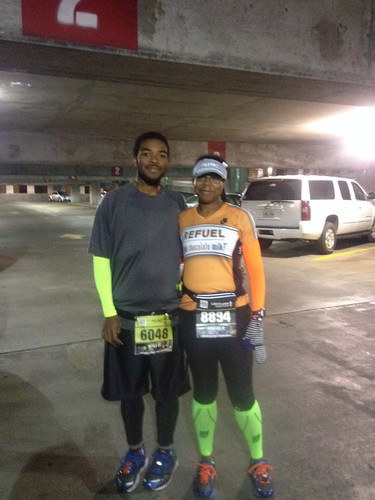 The morning started off well. I had gotten a good night’s sleep and I woke up in a very positive attitude. After battling some bad mental running issues since Memphis, waking up and feeling this good and excited meant I was already a winner! We arrived at the race and did all the necessary things but we lined up at the start too late. It was jam packed! 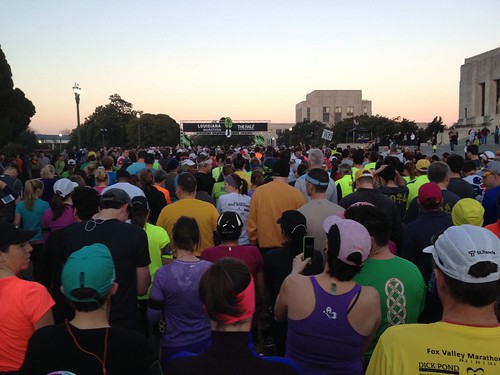 This is my only complaint about the race. I REALLY wish they would move to an organized corral system for this race. The starting area is too small for this type of chaos at the start. If it were organized in a corral system it wouldn’t be like this. We couldn’t get anywhere close to the pacer we wanted to start with so we just got in where we fit in. Yes, the race is small but there was still 7,000 people out there racing.

The plan was to run the first 10.5 with Willie. Sadly, that didn’t happen. Willie has been feeling bad all weekend and he woke up on Sunday thinking he was feeling better so when we made our plan that morning it was a positive plan. But things went differently when we actually started running. He couldn’t keep up and he didn’t look good. I will admit I got a little mad at him because I was only thinking about myself and we had a little tiff around mile 3 because we were running 11:xx min miles and that wasn’t part of the plan. Around mile 4, I snapped out of self absorbed mode and turned back to Willie and asked him if he was ok! I realized he wasn’t keeping up with me because he wasn’t feeling well and not because he wasn’t pushing himself. We stopped and walked and started again but he just didn’t seem OK! At close to mile 5, I asked him he wanted me to leave or stay with him. He told me to leave, but I really didn’t want to. I really wanted to stay with him to make sure he was alright. He told me he would be mad if I stayed with him. He handed me GUs and told me to go. I felt bad leaving him but we both know I was working for something bigger.

I caught up to the pacer we started with who was 15 minutes slower than what I wanted and kept going. Eventually I caught up to the pacer I wanted to start with and passed them. I was rolling pretty good and not running too hard. I felt good. At mile 10.5 we split off from the half marathoners and I started running with this guy. We talked for about 2 miles which was great, but he was running way too fast for me. At mile 12, I left him to refuel. BUT I got to see him at the finish line which was awesome! I crossed the half marathon mark at 2:18 which was on target for me. I was happy. After the half marathon mark, I slowed my pace way down to just regroup and enjoy the moment of still going on to run the marathon. The course was soo pretty! I was living the dream. When I left Willie, I gave him my gloves and hand warmers which I shouldn’t have done. I should have kept the hand warmers at least. You know I’m always talking about how I can’t feel my hands when running and the cold makes it worse. My left hand is always good, it’s the right hand that goes numb. I notice when I’m hold something though it doesn’t happen.

The next few miles went well. My stomach would give me problems after eating GUs though. I think I need to find something else to eat during race. Shot bloks do the same thing to me. The number 6 is my running nemesis. If there’s a 6 anywhere in my mileage I’m going to struggle with it. Usually miles 6 and 16 are the worse for me. So…at mile 16 my stomach started hurting so bad, I thought I was going to have to stop for the bathroom. I really wanted to ask some people if I could go in there house to use the restroom. At then I tripped and fell into a guard rail during the 16th mile. I was lucky I didn’t twist my ankle but I stopped to regain my composure. I started running again! At mile 17, my stomach instantly stopped hurting so I’m starting to think I just tense up at mile 16 knowing mentally it gives me trouble. Miles 17-20 went really well. I wasn’t running as fast as I was before but I was still running! I was enjoying myself.

At mile 21, when I fueled up again, my stomach started hurting. I really think it’s a mix of the sports drink (full sugar) and the GUs that get me. I don’t have a lot of sugar in my daily diet so I think it’s sometimes just too much for me. I had to walk but nothing serious. I picked it back up but at mile 23, I pretty much walked the whole mile. I just talked to myself and said I could walk and rest or run and get frustrated. I decided to walk because I really hadn’t walked that much during the race. Probably a mile total by the time I made it to mile 23. I tried to start up again but my stomach was just not ready so I waited it out. When mile 24 rolled around, I would run a quarter of mile, walk a tenth of the mile or less than that if I needed it. And it worked for me because I was just counting down the miles. Then it was time for the dreaded overpass again. I ran over it the first time, but there was no way I was able to run up it now. I walked up and ran back down and keep rolling through miles 25. I stopped half way through mile 25 just to rest up for the finish. At mile 23 I pretty much fixed it in my mind I wasn’t going to finish in 4:45 and I was OK with that. I really didn’t think I was going to finish in under 5 hours and I was ok with that too. 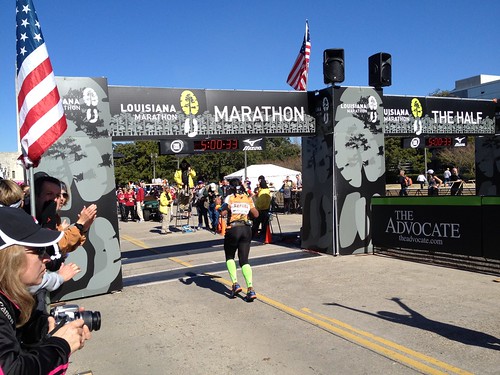 But to my surprise when I was closer to the finish line it had just hit 5 hours. I was so happy because I knew I finished under 5 hours. My official time was 4:57:18, that is almost an hour faster than my unofficial miles in Memphis! I was so HAPPY! I always thought I would cry when I crossed the finish line for the first time but I think I was too mentally exhausted to do that! I have no been more proud than the moment right there! 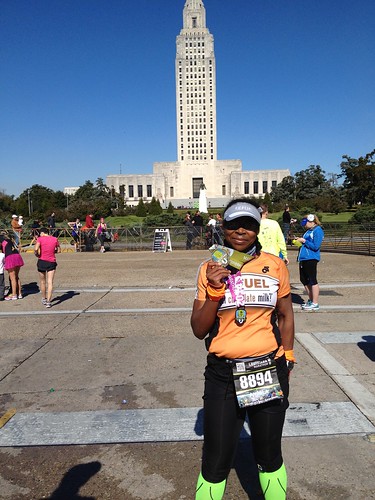 I ran my “first” marathon! I’m officially a marathoner! I am most proud that I didn’t have a mental break down once. I was positive the whole experience and my body held up. I can even walk great this morning. Keeping food in my system is another story. My stomach hasn’t been the same since I finished. 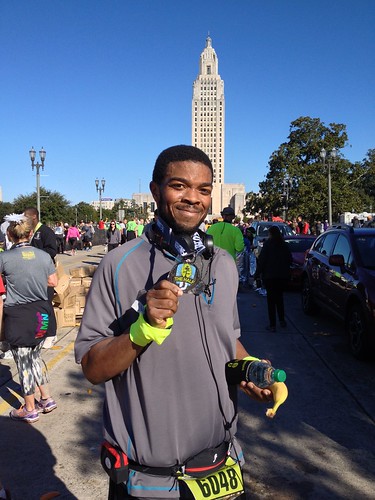 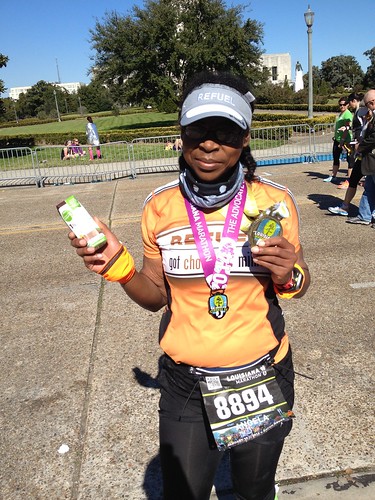 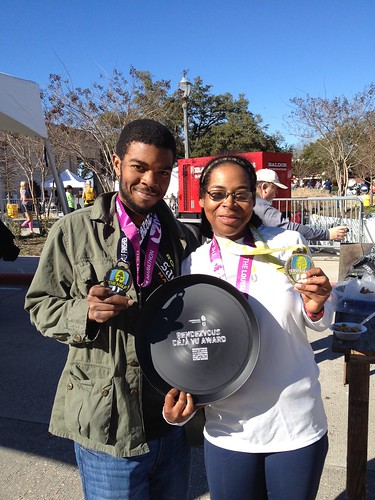 After recovering, Willie and I went to collect our double day award! For doing both races, we received a commemorative crawfish tray as our award. Last year I didn’t get my tray so there was no way I wasn’t going to get it this year! We earned these trays!

All in all, this was a great race. I really have no complaints about it. All of our friends were running Houston on the same day and I told them next year I would do Houston, but I love this race. Next year we’ll be back! As for my goals, I accomplished my B goal by not PRing my 5K race, but everything worked out for the best. Like I said, I’m proud! 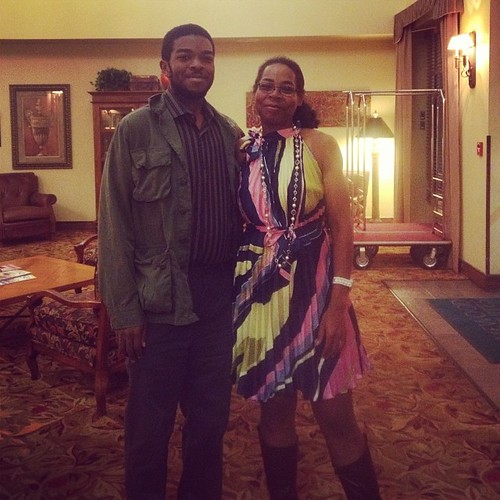 After things settled down, Willie and out went out to celebrate our accomplishments of the weekend and our anniversary. Let me tell you, it was hard putting clothes on. You should have seen us limping around! But it was totally worth it because we don’t put on nice clothes too often. I enjoyed the evening.

Running a marathon is a mental challenge but so totally worth it! Congrats to everyone who ran and finished a race this weekend. We are all rock stars and I’m proud of every one of you! Thank you all for the love and support you’ve thrown my way during this journey. You’ve traveled this road with me every step of the way so I thank you!

*Don’t forget to check out my 5k race recap too!