It’s the moment I’ve been waiting for: it’s race weekend.  All of my buddies are off running The Houston Marathon though which is a bummer.  There are two lovely ladies I would have liked to celebrate our first marathon finishes with, but we’ll have to wait until Monday for the good times! This race was my first race of 2013 so I’m super excited it’s going to be my first race of 2014.  Last year I did the 5K on Saturday and ran the half marathon on Sunday.  I remember thinking that was the most miles I had ever run in a weekend.  This year I’m doing the 5K and the marathon, while Willie is doing the 5K and half.  We are excited because the medals look great!  Nothing like collecting some race bling to set the tone for the year.  I never thought I would be running marathons but here I am! 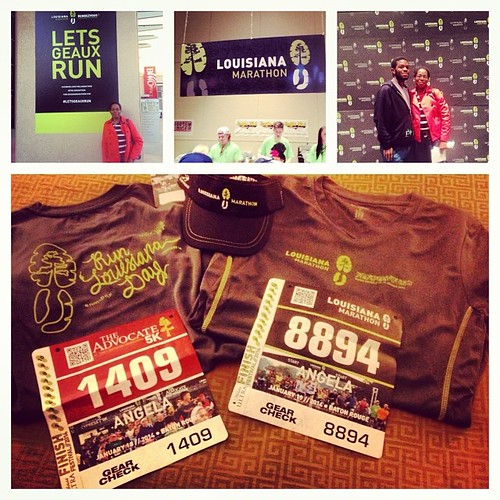 I think it’s really important to set my race day goals especially after the state of mind I’ve been stuck in the after the cancelation of St. Jude.  So yes my friends, it’s time for me to set my ABC goals for this weekend’s race festivities.  Why ABC goals?  I think it’s important to have three goals so I can come out feeling like accomplished something just in case I don’t hit my main goal.  I don’t want to be left with an empty feeling or feeling like I failed.  Obviously the feeling of failure is something I REALLY DON’T like.

A: To finish the marathon in 4:45:59 minutes.  I know they say you shouldn’t set a goal time for your first marathon but I feel like I can cheat a little because I have already run 26.2 miles (very slowly).  I’m just going to throw this one out on the table.  I’ve looked back at my training runs and realized this is doable and not really far fetched.

B: I will not PR on the 5K to day before.  It’s supposed to be colder on Saturday than on Sunday but I want to take it easy.  Last year I PRed my 5K before the half and I’m not really interested in doing this year.  I just want to enjoy the preview of the Sunday’s course and just run with Willie.

C: To run the first 11 miles with Willie to keep me on track.  I think it will be good for me to kind of pace Willie in the first half so that I won’t be totally burned out at the end.  I have a tendency to get in race situations and move faster which is what I want but I don’t want to feel alone when I’m doing it.  A marathon is a long way to go and I would like to share the moment with my husband too!

I am looking to have a good time this weekend.  It’s also our anniversary celebration which has kind of become our tradition!  I’m excited for some good racing and some good food!  I’m sure Willie is going to be talking about all the great food on his blog.  The finisher festival is supposed to be one of the best in the country!  Louisiana always knows how to throw a great party!

Next time I post, I’ll be a marathoner!  I can’t wait to share all the pictures with you guys.  For quick updates follow me on twitter and instagram! If you want to track my race progress you can do so by looking for me here!