I’m a racing fool!  I like the energy and it keeps me motivated to run!  Sometimes I can just go out there and do it and other times I need people screaming at me to keep going.  It’s what works for me.  The Biggest Loser Run Walk series is going across the country for these events.  Originally we were supposed to do the one in Beaumont but it was moved to May during the time we couldn’t do the race.  Race organizers were nice enough to let us transfer our registrations to another race so of course we chose Mobile because that is where my besties live!  Free place to stay + best friends + running = a good time!  Plus, I was glad that Mandie decided to do the 5K! 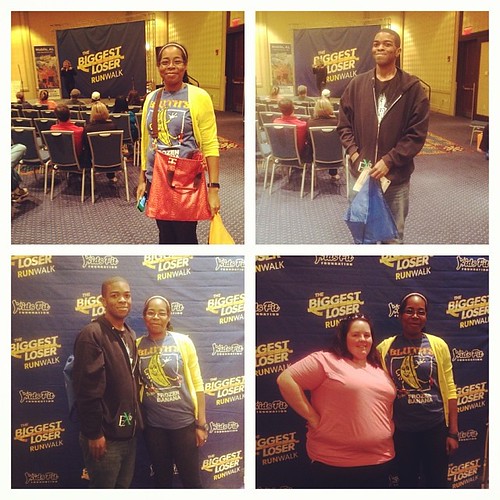 We picked up our packets on Saturday! There was a full schedule of Zumba, yoga and some talks. There wasn’t really an expo though. I thought this was a bummer because I thought this would be a good chance to showcase things like meal planning, weight loss success stories, or just healthy living products. There wasn’t much there and I was slightly disappointed. I didn’t know what to expect going in to the event but I did expect a little more than what was offered! There also wasn’t much in the swag bag which was another bummer. 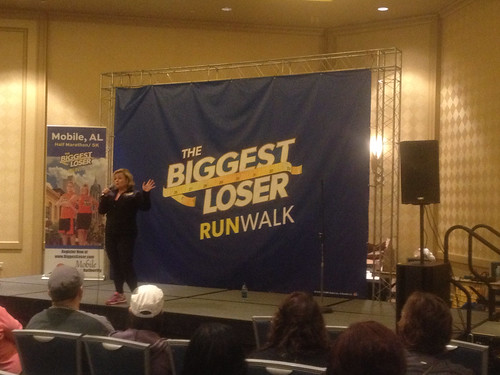 That was Gina McDonald from season 14 of “The Biggest Loser” speaking about her experience on the show! 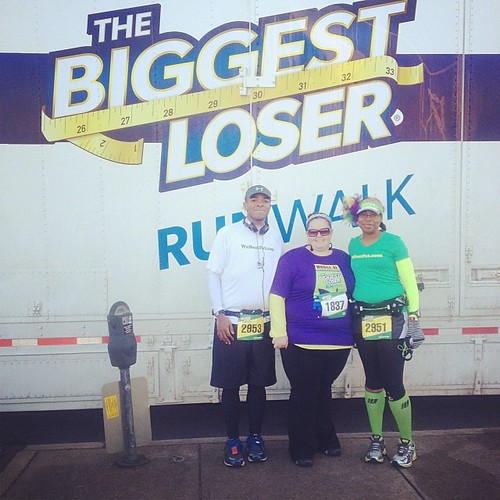 Race morning was chilly but not too cold. I’ll admit I made a bigger deal out of the weather. I’m always cold since I lost the weight! I was ready to run and ready to PR! Willie was just happy to back running and he wasn’t looking to PR but I kind of thought he would do it or come really close! My best time is 2:13:58 so I was hoping to best it but I wasn’t sure. I did just run 2 marathons in two weeks, plus my foot has been bugging me and I wasn’t sure if I could push it. I did 4 miles the day before and felt good and slow, but you never know! 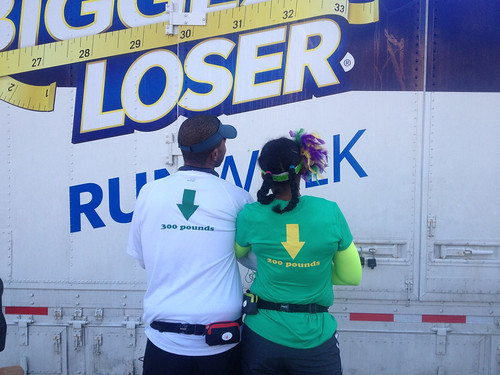 The race was great! It’s a VERY inclusive event. There is something for everyone. There is a 5K walk/5K run and Half Marathon walk/Half Marathon run! I loved seeing the 17 min mile pacer when we lined up. It just made me feel good to see it because I know a lot of people are intimidated by events like this because they don’t want to be last or are afraid to walk. There was no course time limit because they encouraged people to get out there and get active no matter how long it takes. The crowd support was great and I met a lot of people along the way.

I’ve been having problems with my feet since The Louisiana Marathon and I had a sneaking suspicion it was my shoes. I know when I ran RnR NOLA it was time for me to change shoes but I didn’t want to because that’s just not a good idea. Sadly this week I left my Brooks Ravenna 4s behind and went back to the Asics Nimbus! It was a little different running in them at first but I settled in pretty good. I was happy and didn’t really feel any pain or the usual foot problems I was having. I struggled a little with the race because it was different mental game. I’m telling you running is all mental with me. When I started the marathons I just went out there to do them but the minute I sign up for a half marathon, I start thinking about PRs. That’s what I was thinking about the entire time.

Side note: The roads were horrible! My IT band was irritated after the first mile from running on the slanted roads!

I quickly gave up the idea of PRing when people started talking to me about my weight loss on the course. People at the water stations were amazed, people running by us wanted to chat about it so I knew PRing wasn’t going to happen so I let it go. At mile 8 I started to settle into a great pace and I was rolling. The only bummer with this was my watch was again by two tenths! I couldn’t understand why my watch had me running slower than what I felt. The miles kept rolling by but my watch was telling me something different. But I finished the race strong and when I crossed the finish line, I saw Mandie smiling and that made me happy! 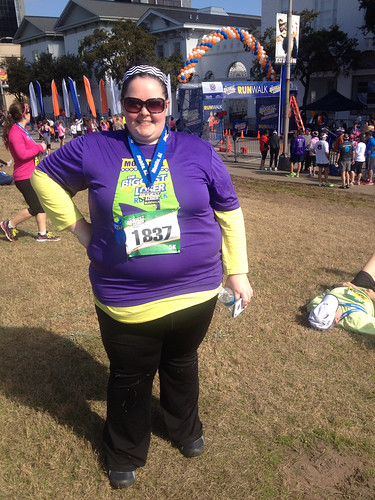 Mandie didn’t have a great experience with a 5K about two years ago so I was worried about it this time.  BUT I knew that wouldn’t stop her from doing it.  I just didn’t want her to have a miserable time like before.  If there’s one thing all of you should know about Mandie is: she’s strong minded and has a fighting spirit.  I admire that about her.  AND she’s super competitive, so she’s going to get out and do something hell or high water! 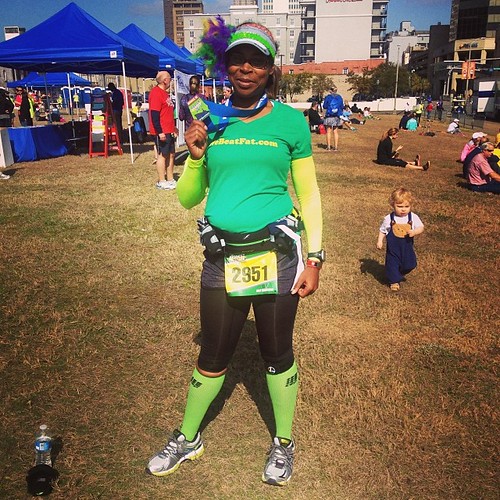 I didn’t hit my PR but I was a minute off! Being that close to a PR makes me think about all the time I wasted during the race BUT I connected with a lot of people along the way. I’ll glady trade my PR for the high fives, hugs and thanks I got when I crossed the finish line! I finished the half in 2:14:48! I finished 16th in my age group out of 42 which is a BIG DEAL FOR ME! 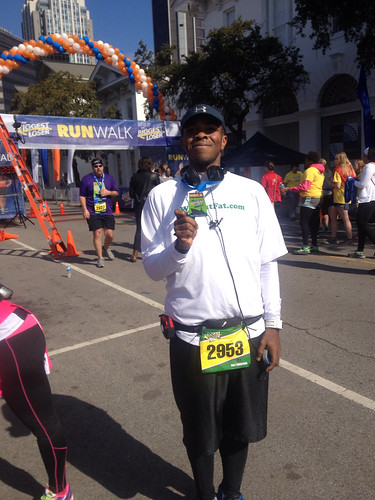 I waited on Willie to come in! Mandie and I were both hoping he would hit his PR! I was so happy when he crossed the finish line. He said his legs were dead and didn’t care about the PR. He was just happy to be back running. Remember he just was in the hospital two weeks ago? He said he didn’t care about the PR until he found out he was one minute away from his PR at the finish too! 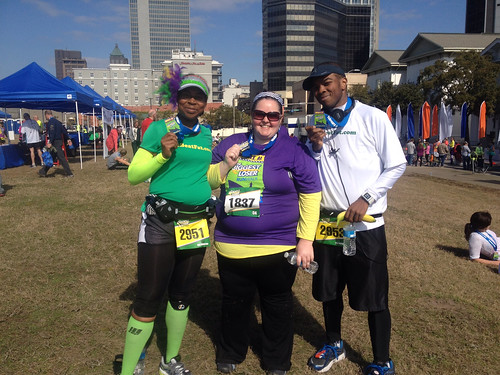 Most importantly, it was something we all did together! I really enjoyed the day and spending the time with Mandie! I am beyond proud of her but it’s a different proud feeling! She’s taking the steps for a healthier life! I can’t really put it into words the feeling and I don’t even know if proud is the right word for me to use but it’s the best one I could come up with right now! 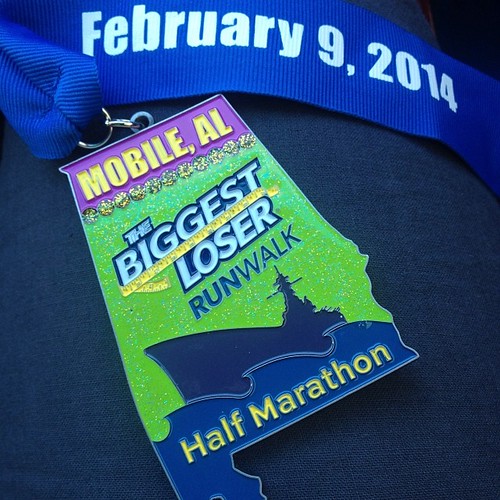 In closing, I know there is some skepticism about The Biggest Loser Run Walk Series coming to Beaumont in May! Yes, it’s going to be hot and maybe that’s something they will think about for following years if they choose to return, but this is a great race for including everyone! We have The Gusher Marathon coming up in March but this might be an event that you add to your schedule too!

*Willie and I were provided with free bibs for this race BUT the opinions expressed here are my own.