Confession:  I’ve run more in the past nine days than I have in past two months.  I’ve had the baby and things haven’t seemed to be working right since then.  It’s been a struggle for me and I know it’s the culmination of a lot of different things, but I know my running form definitely has something to do with it. 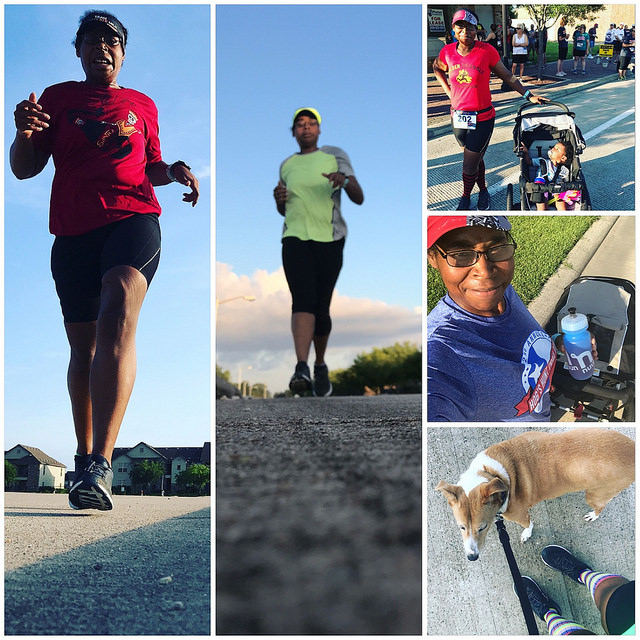 Before I always said I didn’t have time to run so it went on the back burner. There’s some truth in that so that’s why I wanted to do this #streakingwiththeCoolKids thing. Basically, I have to run or walk one mile a day for the month of June. It’s meant to get you active. I thought this would be the best thing to get me out there to run and just to start loving it again. Plus, I’m getting some extra cardio in my life which I definitely do need.

Today was day nine and it’s been working. I’ve been excited to get out there and I’m committed to running or walking a mile a day. One of my running friends said this was a good opportunity to rebuild my base of running and I’m hoping it rebuilds my base of enthusiasm for something I do love so much.

I’m also hoping to improve on my running form which has deteriorated but I’m pretty sure a lot of things happened during my pregnancy that caused this to happen. It’s just something I will have to work against. But I have been excited to run and I’ve been wanting to run more than a mile. It’s just been so stinking hot which makes it less enjoyable.

The most important thing is that I’m getting it done. It’s been nice to be out there and I’m hoping to continue. I’m optimistic about the future.

I don’t really talk about a bunch on the blog, but I am a group fitness instructor.  I am a HUGE advocate for group fitness for many reasons. There has been a surge in group fitness over the years with Crossfit, barre, spin, yoga and many other choices. If you’ve never been to a group fitness class, here are some tips before you go. Show up to class on time. I know it’s hard sometimes and there are times when you’re just running late.  Just because you’re running late doesn’t mean you don’t deserve to get your workout on.  Access…

END_OF_DOCUMENT_TOKEN_TO_BE_REPLACED

To put this into words is hard because I have been extremely focused lately.  I’m the person you come to for motivation and inspiration to tackle your dreams and lately I’ve just been focused on chasing my own stuff.  It’s been hard for me to put it into words to post here on the blog. I’m still here.  If you follow me on Instagram, you know I’ve still been around. The goals I’ve set for myself aren’t visual goals.  That’s why I haven’t had much to post on Instagram (besides in my stories).  The goals I set are kind of…

END_OF_DOCUMENT_TOKEN_TO_BE_REPLACED

Yesterday I was empowered by Sublimely Fit to talk about my struggle with post-partum depression on my Instagram. I met Beth last year at Fitbloggin while we were both pregnant so I feel we’ll always have a bit of a bond. I was beyond impressed that she spoke so openly about her post-partum depression because I haven’t been able to. Believe it or not, I’m a private person. I know that sounds weird because I put my “life” on social media for all of you to enjoy. I’m not good with opening up about struggles. I am the one who…

END_OF_DOCUMENT_TOKEN_TO_BE_REPLACED

Happy Earth Day!  I wanted to get out and run this morning because I haven’t run in two weeks due to concentrating on returning to work at the gym.  I’m ready to get back outside and I thought Earth Day would be the best time to do it.  Well, life had other plans and I didn’t make my run.  It was just too warm for me to get out there.  I’ll try later because I’m not going to waste the day. I missed my Five Things Friday so I’m going to give them to you on Saturday today.  Normally, I…

END_OF_DOCUMENT_TOKEN_TO_BE_REPLACED

Anyone who has tried to lose weight knows the process isn’t easy. It doesn’t matter if you’re trying to lose 30 pounds or 130 pounds. There are just some things that will get your frustrated along the way. I’m currently trying to lose my pregnancy weight so this is something that is fresh on my mind and I thought it would be a great topic to talk about on the blog. Problem #1: Avoiding the social eating. Everyone wants to celebrate with food. Birthdays, holidays, because it’s Monday…or it’s Taco Tuesday, means there’s always some social event to celebrate WITH…

END_OF_DOCUMENT_TOKEN_TO_BE_REPLACED

Progress is moving forward, moving toward achieving a goal.  Progress is always welcome but doesn’t always come easy. There are a few things I am currently working on: Trying to lose my pregnancy weight. Find the balance and time to get my workouts in on a consistent basis. Getting back into running…at the pace I’m more familiar running. There have been times when I’ve felt completely helpless during this time and there have been the moments when I thought I was taking steps backward.  When progress doesn’t show its face, its hard to find the motivation to keep moving forward.…

END_OF_DOCUMENT_TOKEN_TO_BE_REPLACED

Happy Monday! Now is the time to do what you can no matter the level or the time behind it. I’m going through a humbling experience right now because my fitness level obviously isn’t the same as what it was 10 months ago. It’s not like I’m starting all over, but I have taken a few steps backward. Before y’all start hitting the comments about how I just had a baby or I should be blessed, I want to shut it down. I know I just had a baby and I am beyond blessed for my baby. That is not…

END_OF_DOCUMENT_TOKEN_TO_BE_REPLACED

I’m on a mission to lose my pregnancy weight.  I wish it would just roll off but it’s not. I have to admit I am really uncomfortable in my skin right now.  It’s bothering me so much but things will get better.  The first thing I did to make myself feel “normal” again was to get out of the maternity clothes.  The pregnant look was cute for me when I was pregnant; not so much anymore. How much weight am I trying to lose?  I’m trying to lose the 15 pounds left over from the baby and then I’ll work…