It’s so sad the weekend has come and gone because the last Rock n Roll Marathon series race is over.  It’s kind of hard for me to handle right now.  I’ve had a wonderful year representing Rock n Roll and Team Chocolate Milk.  I had a slow start to the year, but I’m glad about the way it finished.

This weekend I traveled to San Antonio to run the last race of the series.  I had high hopes of being able to run the marathon in this race, but things didn’t work out the way I planned.  I don’t plan on running any marathons until I can run a 2:30 half marathon.  I was ready to tackle the remix challenge of two races in two days.  I had the option to run the 5K or the 10K.  There was a part of me that wanted to run the 10K but I knew I needed to be ready for my half marathon the next day. 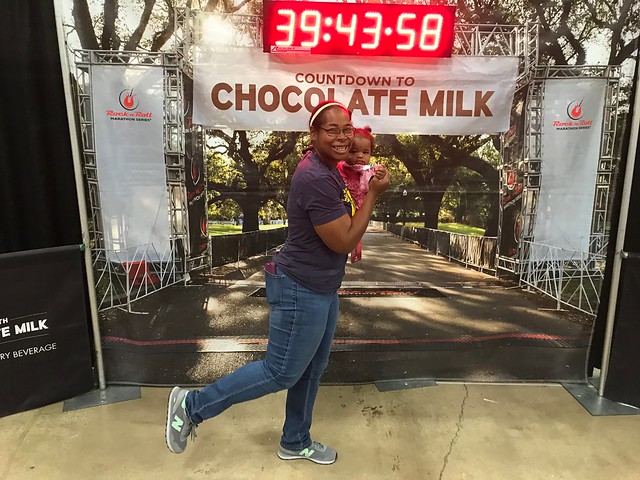 The expo for the race was bigger than most of the RnRs I’ve done this year, but not as big as RnR Las Vegas.  There were some things to look at and there was a Brooks photo booth which I thought was super cool.  We picked up our packets and went on our way.

There was no staying downtown because I don’t think it’s very kid-in-stroller friendly.  San Antonio has the Riverwalk which is great but I don’t need to bring a stroller down there or my freshly walking 11 month old near the water.  The hotel was at the airport and it only took us 10 minutes to drive to our destinations downtown and it was way less than staying down there and way cheaper to park.

I’ve never done the remix in San Antonio before so this was a new experience for me. I can’t compare the experience to any other one for that reason.  I did like that the race started not at the Alamodome because it’s a mile away from most of the downtown hotels.  The race started at Sunset Station and finished in front of the Alamo. 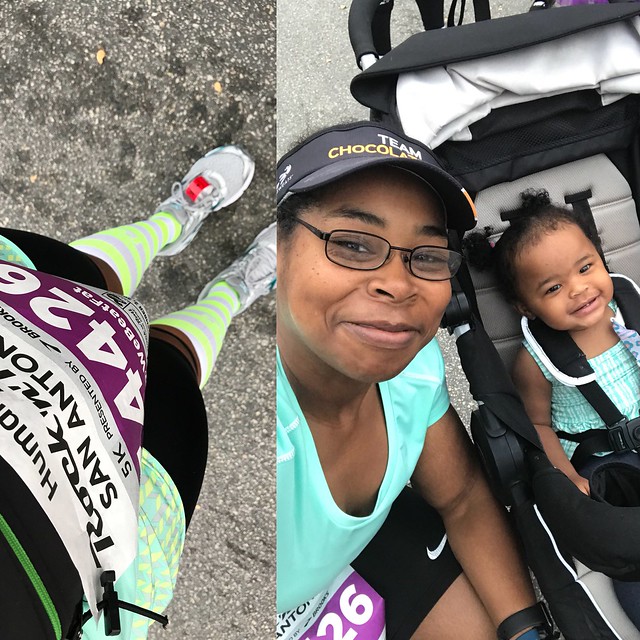 There were a lot of people running this race.  It was a mix of 5K and 10K.  It was a warm morning but nothing too hot.  It was comfortable.  I was the last person to cross the start line because I didn’t want to get in the way with my stroller.  That quickly turned into me doing some stroller dodging the entire race.  Luckily, I stayed with some other moms with strollers.  We all thought that if we stayed together, for the most part, people would move out of the way?  Or maybe people would be scared for their ankles?  In this instance, it was just nice to know that someone else understood the running and stroller thing.  It was a great encouragement for all of us.

The course was nice, but the real gem was the final stretch running down Houston St and turning the corner at the Alamo.  It was kind of cool…and Houston Street is my most favorite street in San Antonio.  It’s got a nice old school feel to it with the Majestic Theatre, the old Walgreens signs, the architecture and the brick streets. 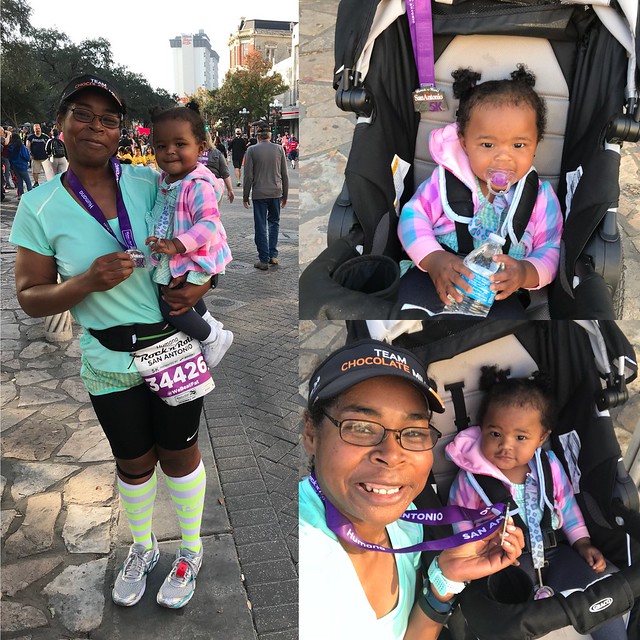 I felt good running.  It takes me a mile to loosen up my hip so after that, I’m all good.  I’ve been running pretty good lately and it was nice to be able to feel that good when running again.  I’m still eight minutes off my normal time, but I’m getting there and I did that with a stroller.  I finished the race in just under 38 minutes. And this officially made it Baby G’s 4th city for her to rock this year.  She’s having an amazing year! 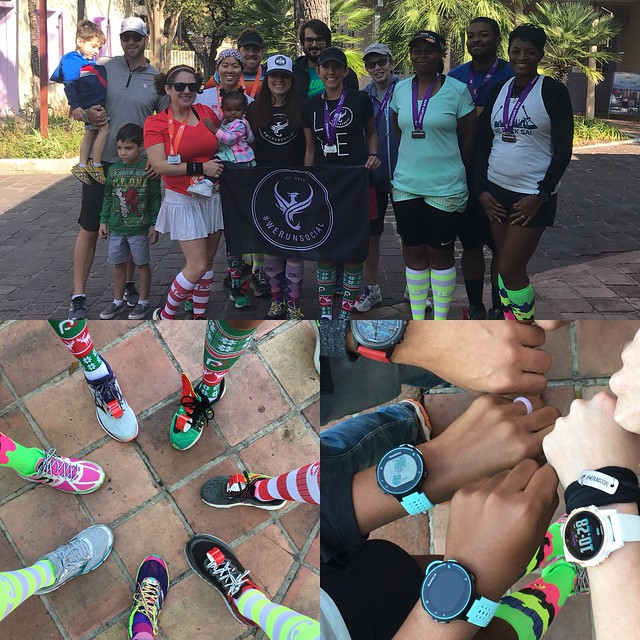 After the race, I went to meet up with the We Run Social gang and just have a good time. I got to hang out with some old friends and make some new ones. It’s always fun to get together with my friends because we talk often on social media but don’t get to see each other that often.  Maybe that’s why it’s sad to see the Rock n Roll series end of the year.  There is always another race to count on seeing familiar faces but a new year is right around the corner.

The rest of the day was just filled with random things because I wanted to get ready for the half marathon the next day.  That recap will be followed soon.

Did you catch my Rock n Roll Las Vegas 5k recap? The Rock n Roll Las Vegas half marathon is one of the best races I’ve ever run. I don’t want to bury the lead. It may not have been my fastest race but I had the best time running down the Las Vegas strip. Remembering the lives that were lost in the tragic events in Las Vegas was the theme of the weekend. This was really a moving experience for me. I was hesitant about coming to the race but ultimately decided I should run. Half marathon day started…

END_OF_DOCUMENT_TOKEN_TO_BE_REPLACED

I received a Tour Pass to run the Rock n Roll Marathon series races this year. The races may be free, but my opinions are my own. This was my first time visiting Las Vegas and, f course it was to run. I went to Vegas to do the remix challenge, the 5K and the half marathon. Both races were at night which was a challenge for me because I go to sleep way early. We had an early travel day on Saturday and changed time zones so the goal for Saturday night was to just gave a good time. #StripAtNight Race Recap: Rock…

END_OF_DOCUMENT_TOKEN_TO_BE_REPLACED

I received a Tour Pass to run the Rock n Roll Marathon series races this year.  The races may be free, but my opinions are my own. I hope you didn’t miss my Rock n Roll Denver 5K recap so if you did go back to read. This is the second part of my Rock n Roll Denver recap.  I had a remix weekend which means I ran two races for three medals.  On Saturday I ran the 5K and on Sunday, I ran the half marathon. It was another cold morning in Denver but it was an earlier start…

END_OF_DOCUMENT_TOKEN_TO_BE_REPLACED

I received a Tour Pass to run the Rock n Roll Marathon series races this year.  The races may be free, but my opinions are my own. I am catching up on my race recaps.  I am starting with Rock n Roll Denver 5K and Half Marathon.  I had such a great time running this race.  I have run this race a few years back but I don’t think I took time to really enjoy the experience.  This time around, I was all about having a good time and just looking around. I did have a remix weekend of running…

END_OF_DOCUMENT_TOKEN_TO_BE_REPLACED

Disclaimer: I am a Headsweats ambassador.  The views about this product or solely my own and not influenced by the company. It’s your chance to win a Headsweats hat or visor.  The only hats/visors I wear are Headsweats.  I don’t know what it is about this brand but it feels light on my head and collects my sweat like no other. I can’t think of one run that I’ve done without a Headsweats hat or visor. That’s a lot of running, right? My closet is full of these hats and visors and I want to share this great product with…

END_OF_DOCUMENT_TOKEN_TO_BE_REPLACED

I’m not going to bury the lead today.  I’m not going to run the Chicago Marathon.  This is the post I’ve been struggling to write for the past two weeks.  This is the reason I’ve disappeared off social media.  This has been a huge source of sadness in my life. It’s like I gave up or something.  But I came to a point where I just physically couldn’t do the training. It makes me sad because this was a goal I set for myself.  I was running for the charity (Action for Healthy Kids) that I love and I still must…

END_OF_DOCUMENT_TOKEN_TO_BE_REPLACED

Happy Global Running Day! It’s the day where the entire world celebrates running and goes for a run. It’s been a long day and that is why this post is late. I didn’t think I was going to be able to get any miles in today but I made it work. I got those miles in late, so now I’m wired and not sleepy at all. That’s no good because I have to get up early to teach my class. Y’all know that I love running and I could share the reasons why I love running with you but you’ve…

END_OF_DOCUMENT_TOKEN_TO_BE_REPLACED

It’s about time for me to get back on my blogging game and provide some useful information. Right now I’m about to start my marathon training for Chicago so running is on my mind. Plus, I feel like I’m starting all over again so this is the time for me to share tips for new runners since I feel like a new runner…again. 1. Build your base. It’s easy to get super jazzed about running. It’s easy to get caught up in comparing yourself to others. You have to put all of those things aside and just build your base…

END_OF_DOCUMENT_TOKEN_TO_BE_REPLACED

Yesterday I ran the Run Houston Minute Maid Park 10K in Houston. This was a race I was planning to do but didn’t sign up for until this week.  I’m being cautious about all of this stuff, but these races are a good excuse to throw myself into mileage.  I will use time as an excuse not to run longer so the races for me to make it until the end.  This race was the second in the race series.  I’ve never run any of these races but I’ll get to that later. I woke up early to squeeze into…

END_OF_DOCUMENT_TOKEN_TO_BE_REPLACED

This past weekend I ran some races, faced some fears and regained a few parts of myself in the process. This weekend was my first big challenge since having Baby G three months ago. It was a good weekend for me and I’m nothing but positive with moving forward. A few weeks back, I found out I was accepted as a Rock n Roll race series ambassador through the Rock n Blog program.  This is something I have been chasing for awhile (3 years) and it finally arrived on my doorstep when I had really given up hope.  I just…