I just wanted to start the blog off by telling you I am a Rock n Roll and Team Chocolate Milk ambassador.  My race entries were paid for by these groups but the opinions expressed on my blog are completely my own.  Dont’ forget to check out my Rock n Roll San Antonio 5k recap first.

I didn’t have a chance to run Rock n Roll San Antonio last year because I was very pregnant so running this year wasn’t up for discussion.  It’s something I had to do.  There have been a lot of changes to the race since I ran it two years ago.  I love how it started not at the Alamodome and started in downtown.  It’s closer to the hotels and it wasn’t like we were all standing around in the parking lot.  This also meant that VIP was in a hotel and not in a tent in the middle of the parking lot. FYI:  the VIP upgrades are worth it in those situations.  You get food pre and post race, drinks, and private bathrooms.  There are even massages!  At most races, the VIP upgrade is $89 and well worth it. 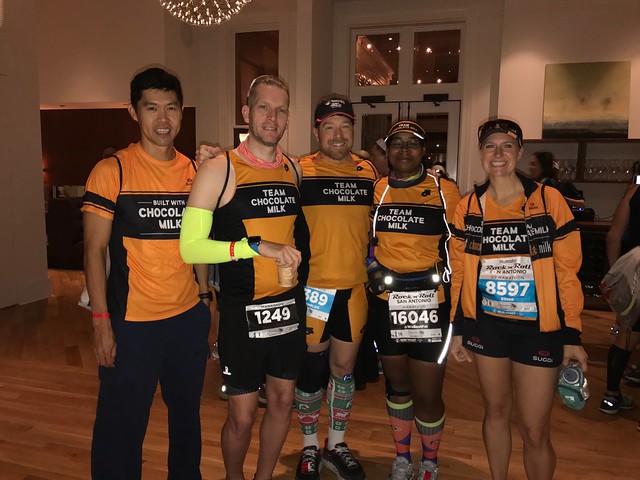 I started off race morning by meeting my Team Chocolate Milk teammates in VIP.  It was great to see everyone and talk about all the races people have coming up.  They had all types of food there but I wasn’t going to touch it.  People were eating full-on meals like breakfast tacos and potatoes.  If I would have eaten that I would be running to a porta-potty.  I just stuck to a normal bagel and water.  I didn’t want to do anything fancy. 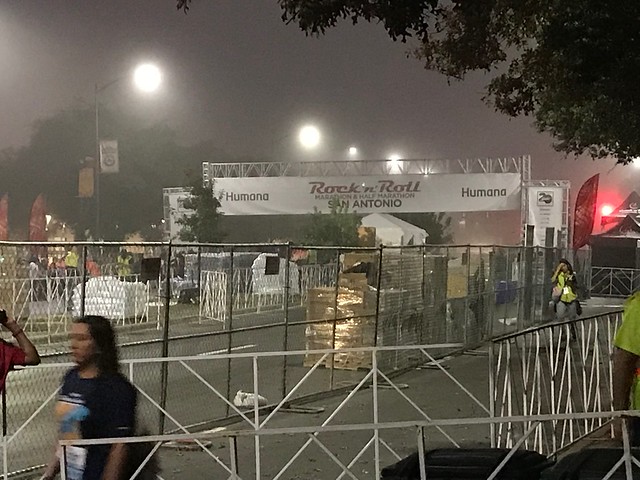 The race started at 7:15.  The day was warm.  The fog was think which meant the humidity was high. There was a chance of rain but it was minor. I wasn’t sure how race day was going to work out for me.  I just wanted to do the best that I could.  My goal was to finish in under 3 hours.  I’ve been chasing after a 3 hour half marathon since November.  All I know is, I’ve been running better and with less pain.  I really wanted to make it happen in San Antonio, but the weather had me a little spooked.

Sidenote:  My normal half marathon time is around 2:15 and that is what I’m working to get back too.  When I can run a 2:30 half marathon, I will start planning for a marathon again.

I started in corral 10 and it took me 30 minutes to reach the start line.  The corrals were not enforced here which I was they were a bit because there were a lot of people running this race.  With the new start in downtown, the streets aren’t as wide so everyone was crammed in on top of each other at some points.  I spent the first miles wondering if I should go around people, but I just kept with the crowd until I was comfortable to run.

At the start of the race, it started off comfortable.  At mile 3, the humidity was so bad I was going to hang up my goal because I knew I wouldn’t be able to keep up in those conditions.  Around mile four, the sky opened up and it started to rain. Usually, I wouldn’t be a fan of rain during a race because sometimes it just makes things hotter when it stops.  This time, it was a welcome change because it cooled things off considerably.  I wasn’t a fan of running on brick streets that were slippery. The water was piling up on the streets so we were puddle jumping.  At some point though, after the socks and shoes were already wet, I just started running through it.  My feet were already soaking wet, I don’t think they could get more wet.

The race course changed from the last time I ran. For the most part, the course was flat.  I was a little disappointed in this because outside of downtown, I don’t really know where I was running.  We did run through Brackenridge Park which was the highlight of the race.  It was the most memorable mile of any race I’ve ever run.  It’s was a tribute to people who lost their lives in combat. They lined the sides of the path with the photos and then there was a half mile of people holding American flags.  It was great.  I wanted to take a picture of it, but I couldn’t get my camera out.  That is why there are no pictures from the race.

Other than that, I couldn’t tell you where we ran.  The hills came in the last 3 miles. I wasn’t thrilled about that.  And a lot of the bands were playing La Bamba.  I was kind of overhearing the song but I sang along when I heard it.  The bands on course were good.  I don’t run with music so it was nice to have some music playing every once and while.  I had a favorite this time around so I did stop to read the sign to find out who she was; Vanessa Lynn Bird was fabulous. It just added a little something extra.  I loved the Spanish dancer at mile 11.  The music was so festive and she had a pretty outfit.  It’s just kind of thing you want to see toward the end of a race because it lifts your spirits, especially when the course has been mainly flat and then hills start rolling in.

My goal was to make it in under 3 hours.  At miles 9, I knew there was a chance I could make it but it was going to be close.  My watch was off a bit on the miles (which seemed to be a common problem) so I didn’t know if would sneak through.  At mile 10, I was still running which was amazing to me and I could see the goal was within reach but I still wasn’t sure.  At mile 11, I knew I was going to make it if I could just keep the pace and mile 12 I knew it was going to happen but I thought it was still going to be close. 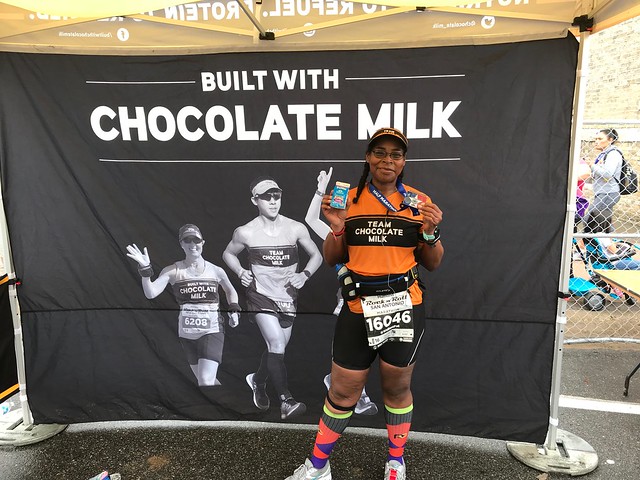 I finished the race in 2:54:02 which was way under my goal time.  I did way better than what I expected. I earned my lowfat chocolate milk that day. And I was ready to chug it! I’m just excited to be able to move forward from this point and recovery is a big part of it. Carbs and protein to help my sore muscles and it tastes great too.

I can honestly say, I ran the best I could that day.  I could tell the improvement and strides I had been making.  Everything is starting to come together again.  Crossing that finish line knowing that I achieved a goal was worth every bit of doubt I had in my head during this race.  That just means I pushed through something and did the best I could and it paid off.  This was just a great feeling. 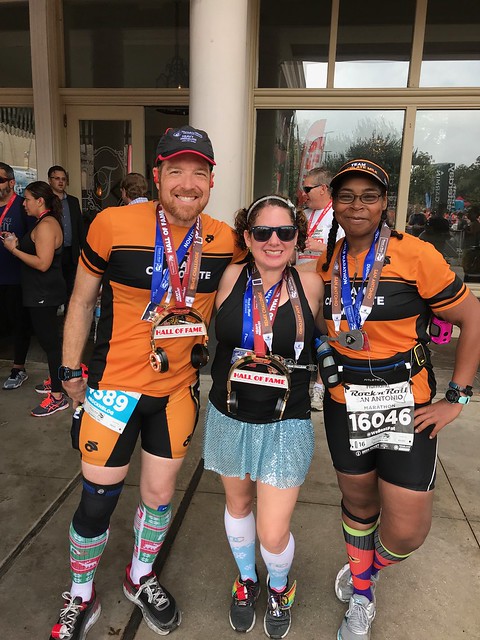 This has definitely helped me gain some of my confidence back.  So that was the last Rock n Roll Race of the year.  It made me sad because I knew I wouldn’t be seeing Andrew or Briana for a while.  The thing is people think Rock n Roll races are a money grab, but it’s not.  When you really commit to running the races, you can see they are building a community of runners who then become friends and then those people become your family.  Andrew and Briana rocked a lot of races this year and are in the Hall of Fame board again.  That’s a hell of an achievement and it’s wicked cool they did that.  Plus, they are genuinely nice people.  I’m glad that running brought them in my life.