I received a Tour Pass to run the Rock n Roll Marathon series races this year. The races may be free, but my opinions are my own.

This was my first time visiting Las Vegas and, f course it was to run. I went to Vegas to do the remix challenge, the 5K and the half marathon.

Both races were at night which was a challenge for me because I go to sleep way early. We had an early travel day on Saturday and changed time zones so the goal for Saturday night was to just gave a good time.

Before I get too far into this, I visited the expo to pick up my race stuff. This was by far the best Rock n Roll expo I’ve visited this year. Granted, I’ve only done Dallas and Denver this year but Vegas was bigger, more picture opportunities (which I didn’t do because the lines were long and I had my mom and baby with me) and there were more booths. It was a pleasant surprise.

Back to the race, I know a lot of people had a hard time getting to the start line so I ended up sharing a cab with some nice people. But the security line was a bit long. I got in just before the race started but it was easy to check bags and get in the corral. 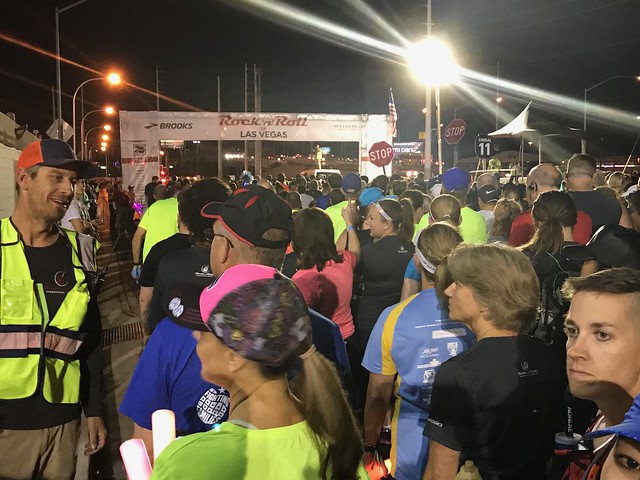 There were so many corrals, I know it had to be several blocks long. There were a lot of people running the race and everyone was lit up with some lights. I felt left out. I didn’t think about bribing any of that stuff. I really missed an opportunity. But I crossed the start line and we ran an out and back course down a side street on the strip.

Everyone was having a good time. People laughed and ran with friends. Of course, they were giving out light up sticks from the SLS Hotel. I picked some of those up and joined the party. I didn’t want to be the only person out there who didn’t have something that lit up.  Once again, run this race; light yourself up with as much stuff as possible. 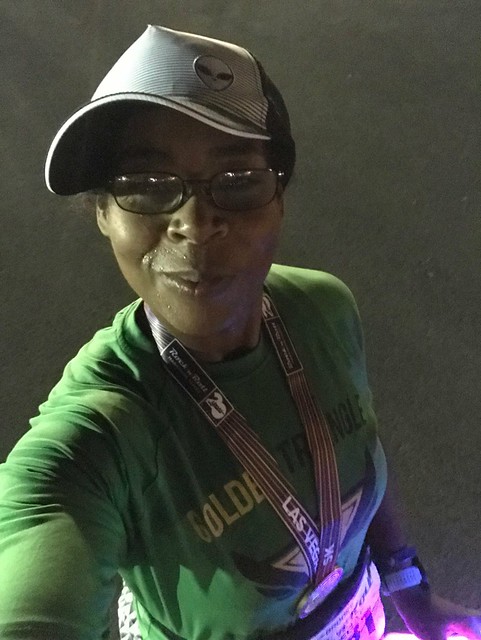 The music on the course was great. It was mostly DJs and it added to the atmosphere. I was having a really good time running even though it was a bit late for me. I am night blind so I had to walk a bit more than what I wanted to because there were no street lights and I couldn’t see.  I feel like such a grandma having to admit that. 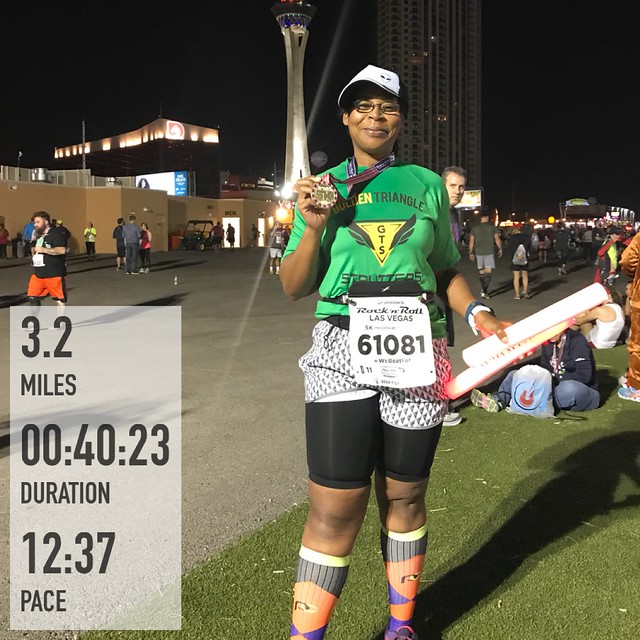 The race ended in the same place where we started in the Circus Circus grounds (?).  The main headliner concert was moved to Saturday night due to the tragic events that happened in Vegas weeks before.  I tried to stay after I finished the 5K but I couldn’t.  I had an early flight, changed time zones, and was moving the entire time since I arrived that morning.  I was tired and just had to go home.

Next time, I know that I need to get there earlier because I missed the We Run Social meetup and maybe I need to take a nap if I’m going to have such a long day. Other than being tired, I did have a wonderful time.  I had no idea what was in store for me during the Vegas weekend, but this was a nice start to the races.  I really just can’t believe how much fun people were having.