It’s been almost 7 months since Baby G arrived in the world and it’s been a lot of change.  I considered myself a fit person before pregnancy but returning to fitness after the baby has been a bit different than I expected.  I did stay pretty active the entire time I was pregnant because I just don’t know how to stop.  I also wanted my pregnancy weight to be manageable after she was born.  I did run into things I didn’t expect and aren’t really things people told me.  These are things I want to share with you if you’re having a baby and want to be active after pregnancy. 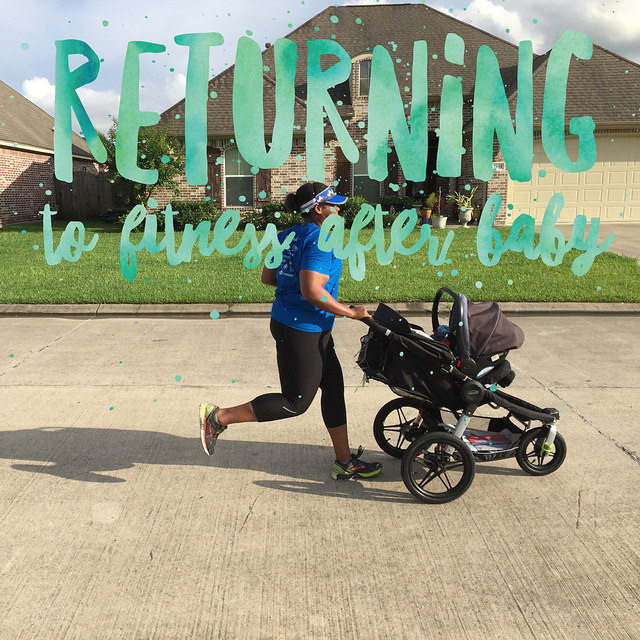 Manage those expectations. I don’t think I did a good job at managing my expectations.  Like I said, I walked 5 miles on the regular at the start of my pregnancy and walked at least 3 miles 4 times a week toward the end of my pregnancy.  I was in it to win.  But when baby popped out, things were a bit different.  I thought I would bounce back quickly and things would return to “normal” but I was completely wrong.  Your activity level will not go back to the way it was before.  It will take work to get back to that level.  This may seem like common sense, right?  This was a hard lesson to learn.  It’s still a lesson I’m learning now.

I can’t exactly go run a marathon right now and it’s troubling to me.

Don’t rush things.  I was anxious about getting back to being active.  Post-baby you are put on exercise restriction and while it was a welcome change in the very early days, it started to wear thin on my by week three.  That was the longest period of time I haven’t worked out.  It will be a steady climb to get moving and ready to workout.  Along with managing those expectations, it’s also a time to celebrate the small victories like being able to walk on an incline on the treadmill or even running a mile.  I was too busy focusing on getting back to full on running, I may have rushed the process a bit.  I was doing half marathons weeks after being released to exercise.  It wasn’t the worst thing I did because I wasn’t going for performance, I wanted to go to finish.  I didn’t really set any long term goals which would have slowed the process a bit so I could get my bearings.

Don’t compare yourself to others.  I follow a lot of people on social media that were runners and having babies around the same time as me.  (It’s kind of crazy how many of my running friends had babies in the same time period.) Everyone is not on the same level and pregnancy affects people differently.  I am not the same as you and you aren’t the same as me which is something that is easily forgotten in this world of social media.  I would get frustrated that I wasn’t doing things that people were doing because my body wouldn’t allow me to do that.  I got down on myself sometimes for no reason.  This is a lesson for anyone so just keep your eyes on your goals and focus on your journey to get there.

Prepare for the unexpected.  I didn’t plan on having a c-section but it was what happened.  I didn’t know what to expect and really didn’t think it would make that big of a difference.  I had 8 weeks of having no exercise which is something I didn’t expect.  Lifting things besides the baby was pretty much non-existant.  Oh, that’s a major surgery too.  These are all things that took me by surprise and put a wrench in my plans.  Even after the c-section, I didn’t ask the right questions or even do research.  I suffered from my lack of knowledge which put me at a disadvantage of what I wasn’t to achieve.

Other things to note:

Sleep will evade you.  There is time to get the stuff done that you need to do but finding the time for extra stuff isn’t always there.  I worked out every day of the week before the baby so I had to modify my schedule, in the beginning, to get a workout in 3 days a week.  Something is better than nothing and some times it’s just better to take the time to sleep to help your body recover.

I sweat a lot or it might be a hot flash. This is not an everyone problem but I sweat uncontrollably.  People look at me at the gym and it looks like I’ve been there for hours but I may have only been there 15 minutes.  This has become a real problem when it comes to my running during the summer.  It’s not really something I expected but I know it takes time for the body to bounce back to normal levels.  It’s something that I’m dealing with to work for me.

Your body will not look the same, even after losing the baby weight.  Things have shifted.  Assets grow. There are new things to deal with but it’s ok.  It’s a new you because you grew a human.  It’s not really the worst thing in the world, right?

I really do hope this post finds someone who will find it helpful.

END_OF_DOCUMENT_TOKEN_TO_BE_REPLACED

Happy Monday!  I know it’s a little late in the day but it’s never too late to get a little motivation on your Monday.  I wanted to send a great message for the day and the only thing I could think about was a message of truth. Always be truthful with yourself.  Why spend the time lying to yourself when other people will do that for you?  The truth is not always easy to handle but knowing it can change your world.  You are the only person you can trust completely so always be truthful with yourself.  People will tell…

END_OF_DOCUMENT_TOKEN_TO_BE_REPLACED

Happy Friday!  I hope all is well in the world with you.  I felt like I had a really productive morning but then the afternoon seems a little less eventful.  I guess you could say I spent it on the couch sleeping. I thought I should sit down and blog since I’m feeling up to it and I’m well rested. So there’s a blog and some hot chocolate…and here I am. I think it’s a good way to spend a Friday. 1. Today I’m officially 38 weeks which means our baby girl should be making her grand debut soon.  FYI:…

END_OF_DOCUMENT_TOKEN_TO_BE_REPLACED

It’s the holidays and people seem to get off track during this time.  For me, I’m dealing with a big event coming my way.  My focus has just been getting something in my tummy and I’ve been GREAT for the most part.  But with our little girl on the way, I’m trying to get back on track so I can stay healthy and get lose this baby weight. I’ve learned that in the past making a plan is the most effective way to accomplish a goal. It’s easier to stay focused and on track that way. I know it worked…

END_OF_DOCUMENT_TOKEN_TO_BE_REPLACED

I feel like I’m slacking because I haven’t been on my blogging A game since I got pregnant. I don’t like to talk about my pregnancy too much because I’m kind of a private person. Sometimes, it’s hard for strangers to know so much information about me, especially when I’m approached IRL with conversations. It’s still something I’m getting my head around and it’s been a while since I started blogging. And of course, all of my posts would be about the baby which is what people want to hear. My workout routine: I started off going to the gym…

END_OF_DOCUMENT_TOKEN_TO_BE_REPLACED

Hey everyone! It’s been a long week and I’ve spent most of it working, eating or sleeping. I’ve become the most uninteresting person in the world. I had big plans for the blog this week and I missed my Thursday blogging. I’m trying to get at least 3 days a week on the blog so I’ll be making up for that right now. The sleeping has been so bad this week that I put an air mattress to sleep on at work during my break. I haven’t done a Friday Five in a long time and I should probably get…

END_OF_DOCUMENT_TOKEN_TO_BE_REPLACED

I’m horrible with change.  It’s really something I hate to admit.  I require structure and boundaries.  I’m finding it difficult to blog for many reasons.  Obviously, I’m going through some serious life changes and I’m really trying to get my stuff together. I am really trying to crowd my blog with baby related things, but the truth is: that is the only thing on my mind. The point is if I’m going to keep blogging on the regular some things are going to have to change and it’s time for me to admit the truth.  Things are different and I’m…

END_OF_DOCUMENT_TOKEN_TO_BE_REPLACED

I wanted to write this post last Thursday but I couldn’t bring myself to do it. I stopped teaching my cycle class last week. I’ve heard the stories of people teaching until their 8th month or teaching right up until the end. I made a promise to myself that I wouldn’t stay in that long. The truth: I could have kept teaching my cycle class, but I chose to leave for one reason. Yes everyone knows that I’m pregnant and is very understanding about it all. As time progressed, I knew I couldn’t keep up the way I once did.…

END_OF_DOCUMENT_TOKEN_TO_BE_REPLACED

Blogging has taken a back seat in my life because I just haven’t been feeling well. My planning day for the blog was spent resting. It just hasn’t been a 100% week for me. I hope y’all can understand. Baby is fine and growing well. I know everyone wants to know the baby’s gender: it’s a girl! There were some problems with the rafflecopter so I’m going to have to pick a winner the old fashioned way. I’m feeling a lot better today so hopefully this trend will continue. I’ve still been doing my workouts but a person can only…

END_OF_DOCUMENT_TOKEN_TO_BE_REPLACED

I thought it was time to have a little fun on the blog.  If you missed the memo, I’m pregnant.  We will find out the gender of the baby on Monday evening, so I thought it would be cool to play a little guessing game. To win a lovely Headsweats trucker hat, you have to correctly guess the gender of the baby and then your name will be put in the drawing to win the hat.  The contest will end Wednesday, August 17 at 12:01 am. These hats are my favorite so I thought I would share with you. Meanwhile,…