The one thing I will take away from this trip is Kansas City is a beautiful city. My expectations were low and I wasn’t expecting much out of this marathon after not meeting my expectations in Chicago. I orginally signed up for the Kansas City Marathon after finding out that Rock n Roll St. Louis would no longer be a marathon. In a panic, I went looking for another race because Missouri was an imporant part of the plan this year. 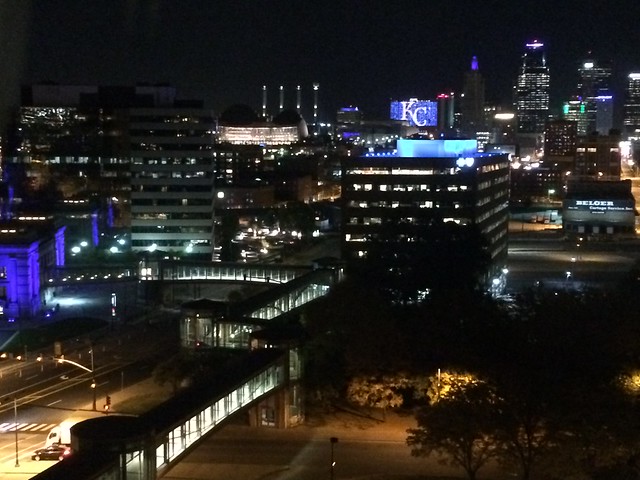 Luckily, this race was the day before Rock n Roll St. Louis! Things happen for a reason and I truly believe that when it comes to this race. The expo was small, but it had some quality stuff there. I really loved how organized the race was from packet pickup until the end. Our hotel was right outside of the start/finish line and two blocks from the expo. That is always a plus. 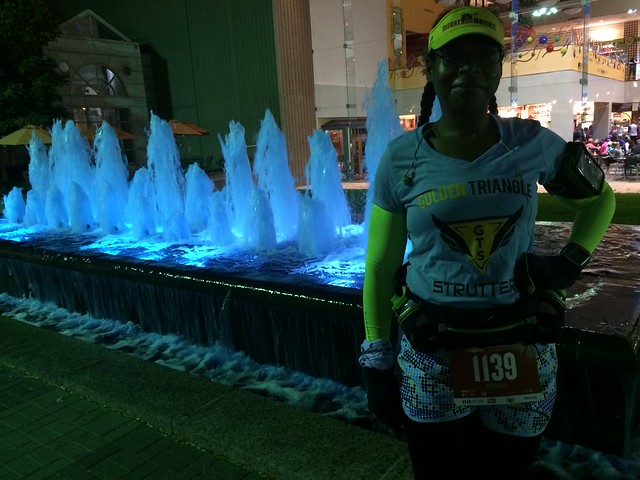 Race morning I woke up early when I really didn’t need to because we were right there. I probably woke up too early but it didn’t matter. I felt good, but once again I wasn’t expcting much. When we rolled into town on Friday, I did get nervous because of the hills. These hills were kind of steep. Willie assured me that I would be fine. My goal was simply to finish. 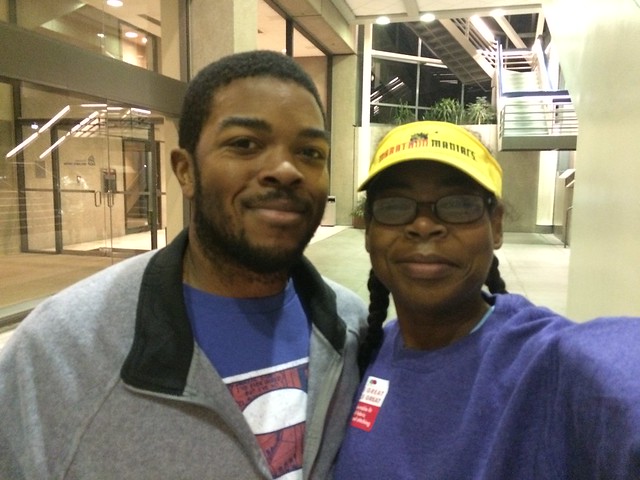 At the start line, Willie assured me again that I would do great and I needed that. I lined up with the 5:15 pace group and set out to run a 5:15 marathon which I hadn’t done in quite some time (like 6 months). Little did I know I was lining up with the coolest pacer ever. I ran with her the entire time along with John, who was running his first race/first marathon. We were the only two that stayed with Kelly the whole time.

I’ve never stayed with a pacer for the duration of a race. We were ahead of pace for most of the race until the last mile or so. We did intervals of 2:1. Yes that meant there was some hill running, but I didn’t mind. The conversation was great! Kelly and John gave me a personal tour of Kansas City. They showed me things, explained the history behind the city and told me places I needed to visit (aka BBQ joints). The miles ticked by quickly. I was having the time of my life. 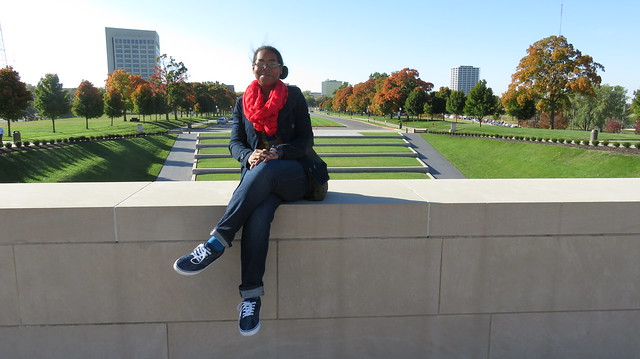 Kansas City is absolutely beautiful. The first thing that really got me was the World War I memorial. We turned a corner and it was just beautiful. Since I was running with the pacer, I didn’t stop to take pictures because it was important for me to stay the course. But Willie and I did go back so I could have some pictures for the blog. The beauty of this city just kept rolling on.

On the marathon site, it said this was the prettiest marathon in the mid-west. Willie and I joked about it and I said there was no way. But it was an absolutely beautiful race. I can’t talk highly enough about it.

This race really had me thinking that I need to go back to the run walk method on my in between marathons to make it through. It was something I abondaned back in the day because the timer was annoying. But doing this really showed me something different. I really didn’t get tired until mile 21 and at the point, I was almost done so it wasn’t something I dwelled on.

As we got closer to the finish, our pace group got bigger. We laughed, we complained, we looked out for each other. Crossing the finish line became a group effort. It was something I truly enjoyed. It was truly a beautiful experience. The struggles from the week before were completely wiped out in the first 5 minutes of the Kansas City Marathon. It was just a great experience with great people in an extraordinary city. 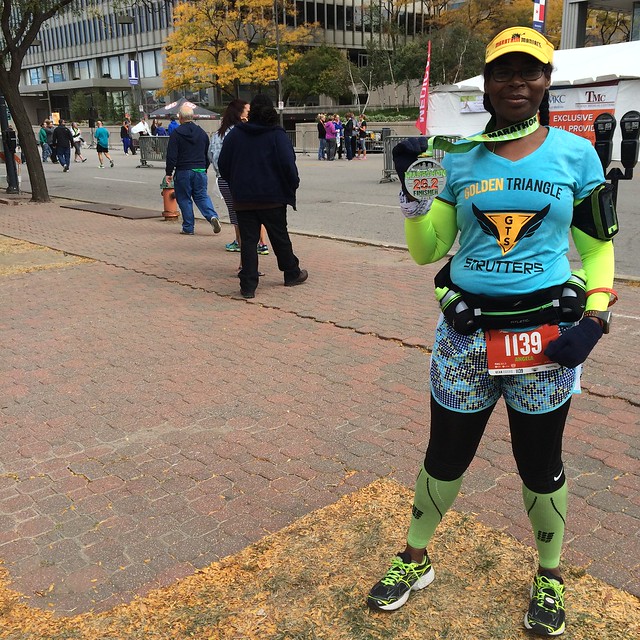 In the end, I finished the marathon in 5:13:49 and I am beyond pleased with that result. My new GTS shirt might be a little lucky too.  What do you think? 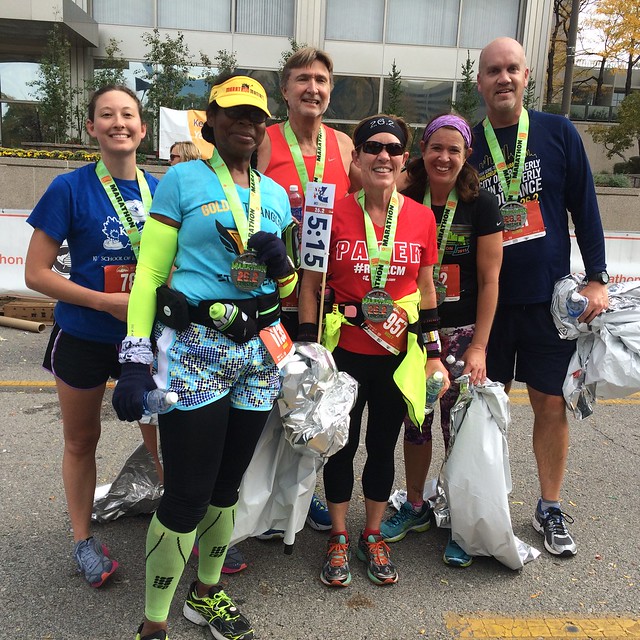 I wouldn’t have made it there without the help of a great pacer and a lovely group of people. It was great to hear everyone’s stories, to celebrate first marathons, to celebrated 28 marathons and to celebrate 55 marathons finished. I smiled the entire time. When I crossed the finish line I shed a couple of tears because it was just that great. It was a moment to be proud. It was just a moment or 5 hours and 14 minutes I will never forget. Never!

The course may have been hilly but the weather was perfect for running. It was just one of those days where everything aligned perfectly. If you’re looking for a good race, give the Kansas City Marathon a try. I will definitely go back not because the shirt is awesome (because it is) and not because the medal is huge and awesome (it is all those things) but because the city was welcoming and the people were nice. That is all a girl can ask for. That means state #13 turned out well. There’s another check off the state list! 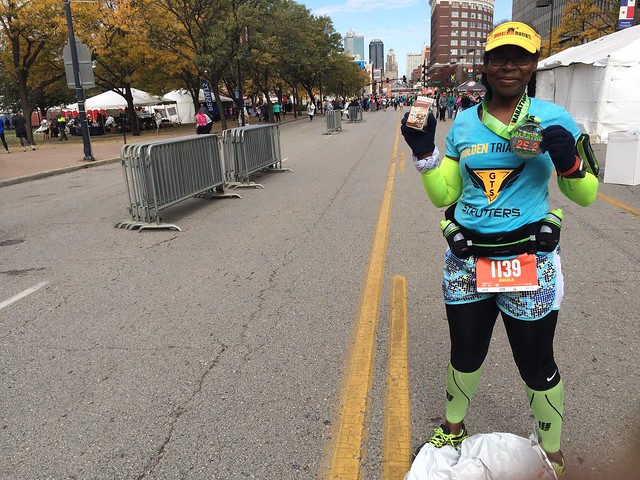 A bonus: there was chocolate milk at the end.  I needed it for my recovery because I was running a half marathon the next day.  It’s so yummy but it’s got the right carb to protein ratio to keep me moving which was something I was concerned about. 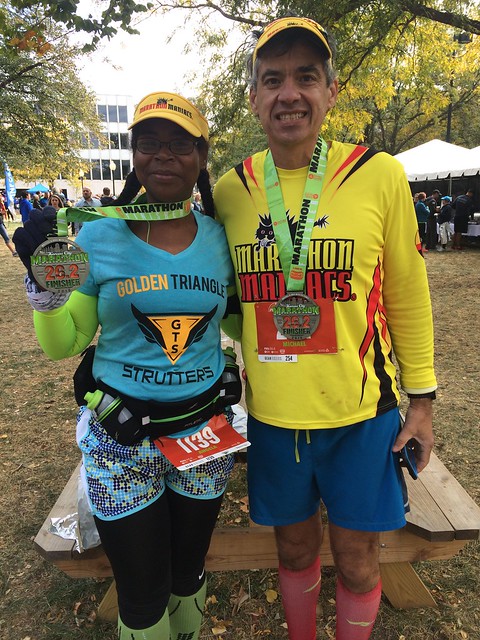 At the finish, I saw my buddy Mike.  He ran the 5 hour pace group.  It’s always a joy to see him.  I think I see him more outside of Texas than anything.