I had no skin in the game here.  I just ran the Mississippi Blues Marathon the week before and I just wanted to finish.  I won’t lie when I tell you, I chose to run the marathon so I could eat some of the delicious food at the finisher festival.  Spoiler alert:  I was too tired and worn out when I finished to enjoy any of the food.

As the week went on, I just wanted to do better than I did last year.  I finished last year in 4:57:53 so coming in at 4:56:59 would have been plenty for me.  I’ve been having some issues while running lately so I’ve been trying to do some things different.  First thing different this race was using Honey Stinger instead of my normal GU! I liked the stingers because they aren’t as thick as the GU.  I’ve been getting to points in races where I just don’t want to take the GUs anymore, like wanting to skip them all together. 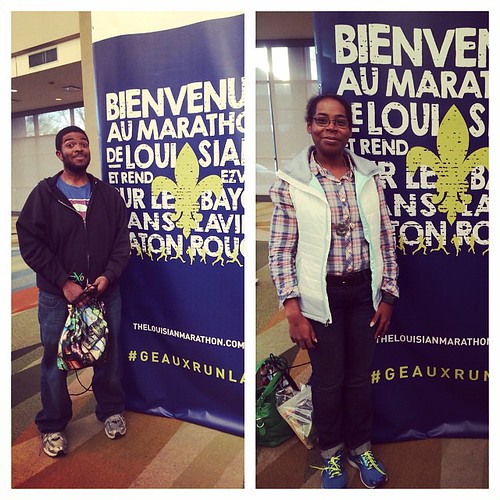 We went to the expo to pick up our packets on Friday evening, but there seemed to be a mix up.  It took us about 30 minutes for them to locate our packets.  When we finally got our packets we went on about our business.  The expo was very small so it didn’t take us too long to get through it all. 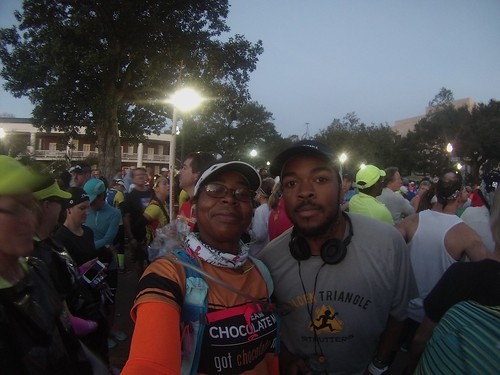 Race morning was cool but not as cold as the day before. I was ready to run. I was armed with the GoPro again and Willie was ready to roll. When we were lining up in our corrals, Willie told me he was going to run a three hour half marathon and he was right. I really just wanted to have a good time and enjoy this race.

This year the race had corrals which was wonderful. In past years you kind of just took off and it was a total mess. There was a wave start and everything seemed to go much more smoothly. I was really glad about this because I was able to get into my groove quickly. The first few miles of the race went by very quickly. The next thing I knew we were running by the lake and hitting LSU’s campus. I can’t stress enough the beauty of this course. That’s probably why the miles just rolled on by.

At the half marathon split, I decided it was probably time to turn on my interval timer for a little bit. I was feeling a little tired but not spent. I knew my second half of the race couldn’t go on at the same pace as my first half. The race started off cool, but it got hot. There was full sunlight which made it difficult for me, but I kept chugging on.

At mile 15, I passed the spot where I fell down the previous year. I moved to the center of the road so I wouldn’t have anything like that happen again. I enjoyed seeing all the people on the side cheering for their family and friends. I got pick me ups when I would see children/significant others spot their person and run with them for a while. I’ve never had this happen to me so I would imagine it feels great. I took joy in the moments of others to push me through the miles. The run/walk timer saved me in moments because it kept me moving, even when I didn’t want to. It killed me sometimes because I felt obligated to stop running when the timer went off when I felt I should keep moving.

By the time I got back to the overpass at mile 25, it was hot! I was really ready to be done. Because I struggled so much from mile 14 -25, I didn’t think I would be able to come in better than last year. I rounded the final corner and pushed as hard as I could to cross the finish line. My watch was off on the miles probably because I took some of the road splits but of course the time was still accurate. 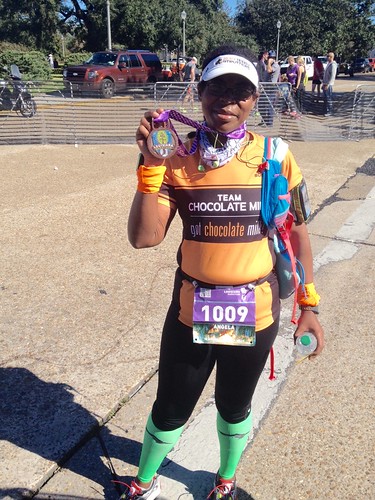 I ended up finishing the marathon in 4:52:23 which was a 3 minute marathon PR over St. Jude. I wasn’t expecting that but I was happy. I think I’m finally learning how to do this marathon thing. It’s been a learning process but I feel like I’m moving in the positive direction and learning more every race. 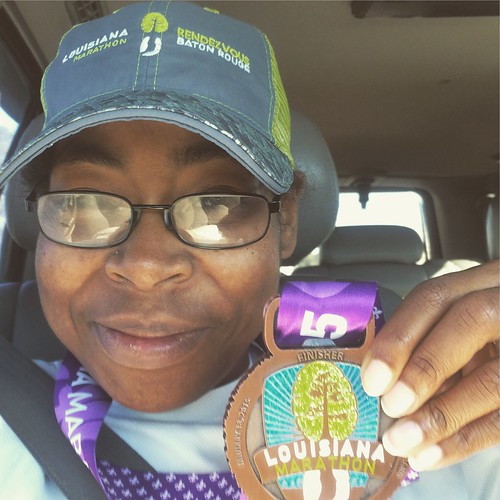 And I have to say, this is good quality bling. This is a race you should run if you’re a traveling runner. Good people. Great course. Tasty food. 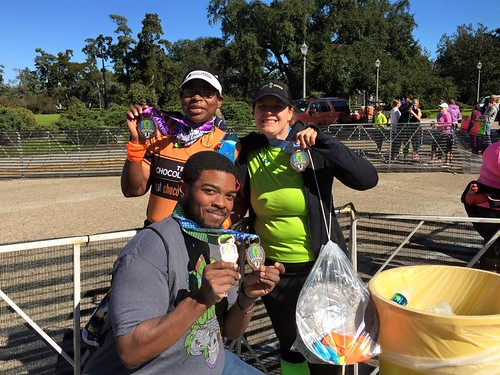 Totally had a blast at this race!