On Memorial Day, Willie and I ran the The Patriot Half Marathon (me) and 5k (him) to support Carry The Load.  We started out being very excited about this race but it kind of got over shadowed by the race we will run in San Diego on Sunday!  But this was the hardest race I’ve ever ran.  There was humidity and wind and hills. I’m just not use to the rolling hills so I had to take it slow.  Plus, I wasn’t interested in injuring myself where I couldn’t run in SAN DIEGO!  You see?  It’s become that important to me.  My goal for The Patriot was just to finish. 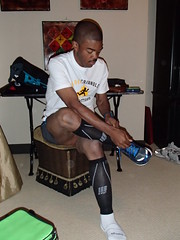 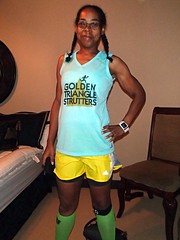 This particular race day was very different from any other day. Usually when we have to drive a long distance I’m not in a good mood and I’m worried about making it on time. This race was in Rockwall which is outside of Dallas so we stayed at my dad’s house in the DFW area. It was still about an hour away from the race. But I was calm, cool and collected. I guess me just having the goal the finish didn’t put any pressure on me because I’ve finished 5 half marathons already, 3 this year alone! 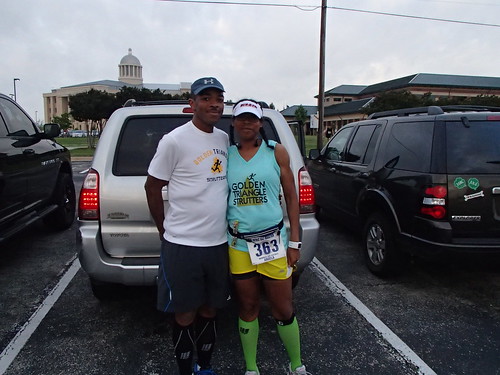 I knew what to expect and I knew it wasn’t going to be easy but I was ready for the challenge. Sure it would have been nice to hit a PR but that’s not what it’s all about. Sometimes it’s just getting out there and doing the thing. Plus, Willie had signed up for the 5K which gave out a medal. He did a great job in the humidity and ran a good race! There were times when I was a little discouraged but I kept pushing on. I had to pace myself seriously and I drank A LOT of water. When I crossed the finish line I wanted to cry because it was tough and humid…and then windy. I was actually just proud to be done. 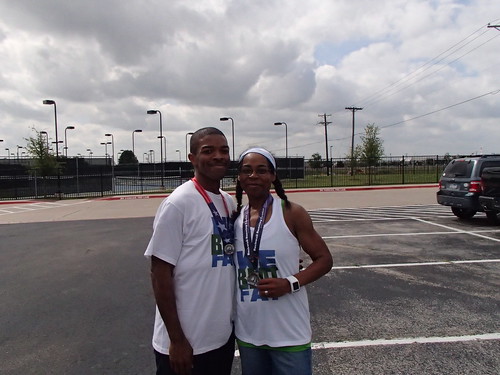 Of course we had to represent We Beat Fat. I made these shirts for us and I think they turned out pretty nice. We’ll be ordering profession shirts soon and maybe we’ll sell them for all of those people who have beaten or want to beat fat too! I finished the race in 2:22:31 which was gun time. I’m not sure what my chip time was, but it was probably 2:21ish. My fastest half marathon was in March 2013 in Dallas where I finished 2.13:51! Like I said, I don’t mind because the goal was just to get out there and finish…and get the bling! I worked hard for that medal. 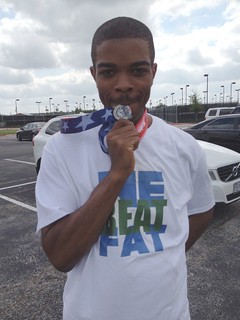 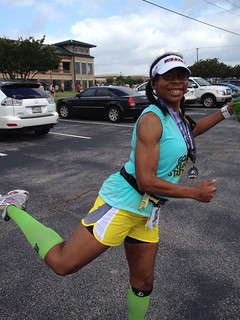 We didn’t stay around after the race because we were eager to get back home. We may have been there but our heads were definitely in California. So that’s where we are now, planning on our trip to California to run Rock n Roll San Diego!

What did you do for Memorial Day?