I haven’t spent enough time in the kitchen, it’s time for me to go back.  Now I have a bit more time on my hands since I’m not constantly in training for something so I thought it would be the perfect time to start experimenting again.  I’ve been wanting bread of some sort and the idea of zuchinni bread came to mind. Everyone seems to love it; I should give it a try. 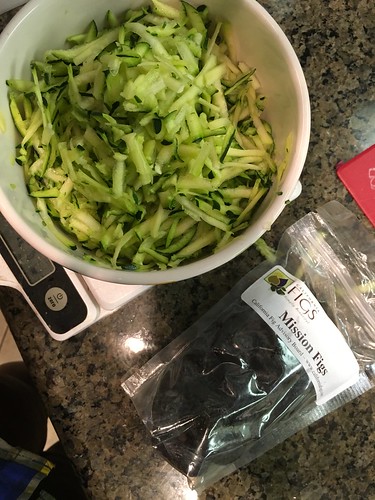 Let’s be honest, zuchinni tastes like nothing.  That’s why healthy eating people put it in their foods as a filler and a way to get some veggies in their diet.  I’ve seen people add it into their oatmeal, muffins and as a carb substitute.  You can basically make zuchinni into whatever you want and it provides mositure into your food.  It’s like water.  (Today, I have bad jokes.) I did make some zuchinni fritters a while back and those were FABULOUS. 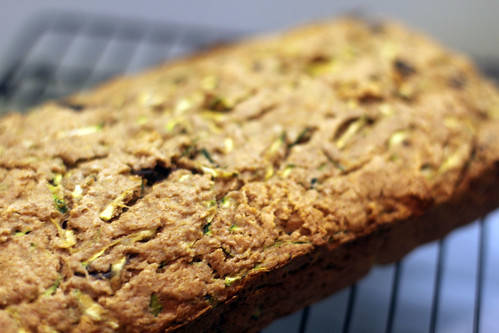 I adapted a recipe I found on pinterest from Sally’s Baking Addiction to make this bread work for me. I had some things on hand and I wanted to do something with the figs I got from Fitbloggin. I thought the figs in the bread would be a good addition. 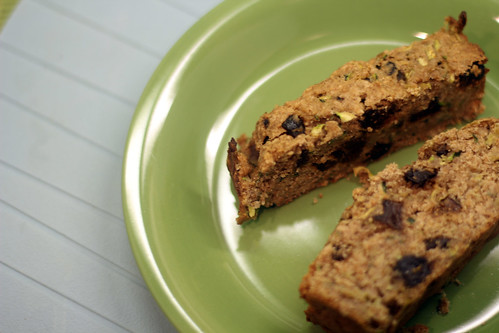 I’ll be real with you my bread didn’t look like Sally’s bread. Right now, I’m looking at the pictures of her bread and I wish my bread looked like that. My bread turned out a little dense.  It was good. It was very good AND it satisfied my sugar cravings.  I ate it for breakfast smeared with peanut butter and it was great.  My bread just didn’t look as flully and light as Sally’s bread. 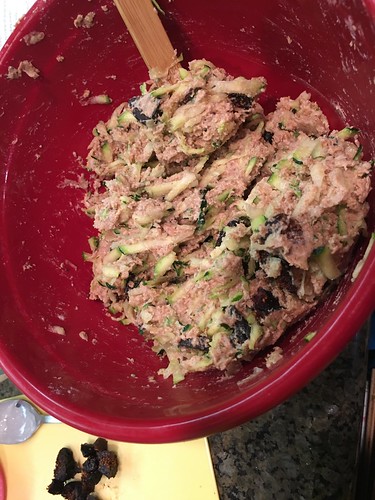 I will tell you I knew something was wrong when my batter turned out like this. No wonder this bread was so dense. There was nothing light about it.

Why did I make those substitutions?  I really thought that was a lot of coconut oil but things need fat to really come together.  I’ve been afraid of fat for a long time so it was my natural instinct to cut the fat.  People have also used applesauce instead of oil which works well, but the baked goods don’t rise correctly (probably a problem I had here) and those baked goods don’t last too long.

There was a lot of agave in the orginial recipe for my liking.  That’s the may reason why I cut it.  My bread was perfectly sweet enough for me.  I didn’t use plain greek yogurt because I didn’t have any on hand.  I forgot to buy some at the store so I used what I had.  I’m not sure how much of a difference that would have made in the recipe.

And I don’t do nuts in bread for some reason but the figs were a nice touch in this bread.  It really added another level of sweetness which is why I didn’t need all of the honey.

We’ve been a little pressed for time and Willie doesn’t really want to clean a lot of pots and pans so I’ve been making some casseroles lately.  This one that is great for lunch because it’s easy to pre-portion out and great for on the go. There are few steps but it’s a pretty good meal. I season the skinless chicken breast and thighs and bake them covered in the oven at 450 degrees for 45-50 minutes.  I use a mixture of both breast and thighs for moisture in the dish.  Chicken breast are really dry and I learned through…

END_OF_DOCUMENT_TOKEN_TO_BE_REPLACED

I’m excited to introduce a new thing to the blog called the three way.  It’s something I thought would be fun, but it’s been a learning experience.  I’m glad I started off with something simple like an apple.  I’m a huge fan of red apples: gala, pink lady, jazz…I can never have enough.  Willie is strictly Granny Smith but that’s too tart for me. It’s fall and everything is going pumpkin again.  I love pumpkin but we should really enjoy the great selection of apples coming our way.  That’s the reason for the apple three way.  I went sweet this…

END_OF_DOCUMENT_TOKEN_TO_BE_REPLACED

This recipe is part of the Apple Three Way Series. The apple pizza isn’t meant to be fancy.  It’s meant to be easy.  I used PB2 again in this recipe because I had it on hand AND it’s something I don’t have to worry about the calories or fat from the peanut butter. You can use peanut butter instead of the PB2 though.  It’s up to you! Also, these apple pizzas are great because you can customize to what you want.  Some people may want shredded coconut on them.  Others may nuts or apple butter or raisins…or all of that.…

END_OF_DOCUMENT_TOKEN_TO_BE_REPLACED

It’s like an apple pie but in a quesadilla form.  It’s a nice twist and it’s super easy.  If you have a panini press, this would be great. There are two options here: 1. you can sauté the apples with cinnamon in a pan until softened or 2. warm  up your apples with cinnamon in the microwave.  I always do the microwave because it’s easier.  Remember, I’m not a cook so I’m always going the easy route.  The whole idea is not to spend a lot of time making this stuff. To make my cinnamon cream cheese, I used a…

END_OF_DOCUMENT_TOKEN_TO_BE_REPLACED

I promised I would share some healthier dishes that you can add to your Christmas and New Years celebrations.  I served it up at my family Christmas this past weekend and everyone was surprised it was something that I made.  Everyone thought it was more sinful than what it actually was.  It’s simple and easy and doesn’t take long to make.  Here is what you need: 1/2 cup crushed pineapple 1/2 cup chopped pecans 1 package SUGAR FREE Pistachio pudding mix 1 32 oz container plain or vanilla lowfat Greek Yogurt Mix the pineapple, pudding mix and greek yogurt a…

END_OF_DOCUMENT_TOKEN_TO_BE_REPLACED

Every time I got on instagram someone was posting pictures of zucchini fritters.  I’ve never had a zucchini fritter in my life and I definitely didn’t know how to make them. I thought I would give it a go on my own terms but first I needed to know the basic of a fritter. So I made a traditional fritter without frying it. Apparently, a fritter is fried. I don’t do fried or oil! The traditional fritter has all purpose flour, butter, cheese and is fried in oil. Once again, I “pan fried” these with a simple cooking spray. And…

END_OF_DOCUMENT_TOKEN_TO_BE_REPLACED

Happy Labor Day everyone! I’ve been hosting some friends this weekend so Sunday setup has come into Monday! I know you’re all dying to know what I’ve decided to make for lunch this week. I’ve decided on meatloaf. It’s important to get started on the meal prepping for the week right now if you haven’t. There’s still time for you! So why meatloaf? I can make one big pan of it and it will last the entire week for the two of us. Willie doesn’t like the abundance of ground turkey/chicken that we have around the house, but it works…

END_OF_DOCUMENT_TOKEN_TO_BE_REPLACED

I hope everyone is having a good day.  I think I’m a little worn out from my workout yesterday.  I’m feeling a little lazy so I’ll take it. My mid-week long run turned out longer than I expected. Let me tell you, I didn’t feel like I ran 8 miles until I tried to sneak those extra two in and then it felt like my feet were bricks. Anywho, last week I ran out of strawberries for my oatmeal. I only had enough for one person’s oatmeal so I gave them to Willie because I love him so much. FYI:…

END_OF_DOCUMENT_TOKEN_TO_BE_REPLACED

Yesterday morning was a crazy one.  I was running behind from the gym but I wanted lentils for lunch.  When I made it home from the gym at 6:05 am, I had about 45 minutes before I needed to leave for work.  I figured that would be enough time to cook up some lentils and I created something delicious. Lentils are part of the legume family and are a super healthy food.  In one cup of lentils there is 18g of protein which is pretty impressive. Also, lentils take on the flavors of what they are cooked in so you…