I wanted to get the new year started off the right way by doing something healthy.  New Year’s Day started with a 90 minute drive to run a marathon.  The forecast for this race was not ideal but it got better as the day approached. 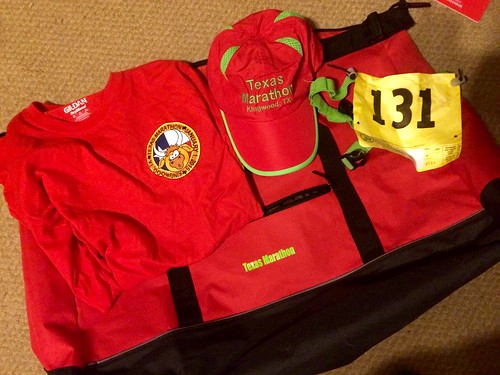 When we arrived, we went to pick up our stuff.  We got a huge bag, hat and t-shirt!  This bag is seriously huge.  I have no idea what I’m going to put in it.  Maybe I’ll just use it as my race day bag because I always have so much stuff.

I didn’t take any pictures before or during the race because we were kind of running behind.  It was raining, windy and cold.  That is pretty much the nightmare situation for me during a race.  I kind of wasn’t feeling the race but it wasn’t that bad.  I knew I needed to get a long run in and this was simply a training run for me.

The course for the marathon was 4 loops of a 6.55 paved trail through a wooded park.  It was really nice. I’m sure the rain situation would have been a lot different if it wasn’t for all those trees blocking the path. The path was really narrow which is probably the reason why they limit this race to 700 people.  It was a marathon and half marathon.

I had never run this race before and I had heard nothing about it.  I knew it was loops, but I thought it was going to be a complete loop and not an out and back type of loop.  I was kind of shocked when I saw people on the way back.  In the beginning I thought this was going to bother me, but turns out it didn’t.

I liked being able to see people on the course all the time.  I never felt alone.  The setup also made it conducive to talk to people on the course.  I made some friends.  I also really liked the loop format because it wasn’t like I was tackling a marathon. The race was split up into manageable chunks.  Each lap was it’s own challenge.  Before I knew it the race was over.

I really enjoyed running through the paths.  There were bridges and tunnels.  We ran around a lake and then a man made lake.  It was scenic.  But it was cold and windy.  The volunteers were very nice and the aid stations were stocked with all types of stuff.  The main aid station was at the start/finish line because we had to loop around it for the laps.

For the first time during a race situation, the GU was making me sick.  I really didn’t want to take it but I knew I had to eat it to keep my energy up.  That was probably a reason my legs started to cramp on the last lap.  I know it was a mixture of the cold, salt and my refueling.  I now know that I probably wasn’t drinking enough water and electrolytes.  I think it’s harder to race in colder situations because you’re just not going to be as thirsty.  I had all kinds of headaches during this race but I still pushed through. 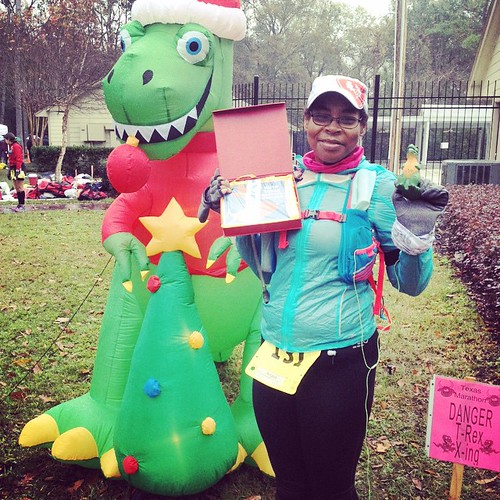 I finished the race in 5:09:13!  I walked the last mile because the rain started to pick up and I didn’t want to slip and fall.  It wasn’t worth it.  The last three miles were kind of like that for me because the rain got heavier and heavier at that point.  I made the executive decision to just slow down to avoid falling.  I’m clumsy. 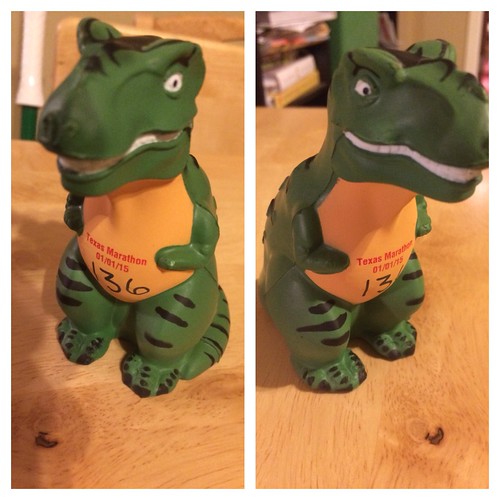 When you crossed the finish line you were given a TRex with your place on it.  Mine said I was 136 but the official results say I was 133.

And we were given this huge medal.  It weighs 3.1 pounds and is bigger than my Little Rock Marathon medal (not as cute but bigger).  It’s super heavy!  I don’t see how people put it on! 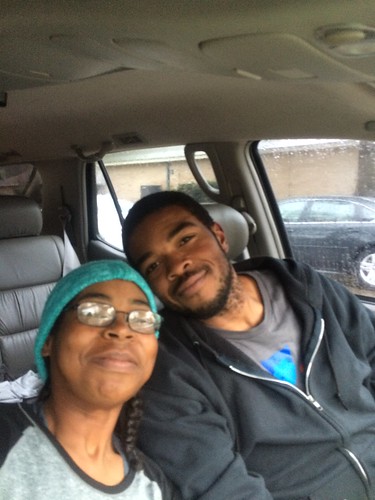 After I crossed the finish line, I went straight to the car to change.  I have no desire to get sick.  They were giving out pizza for everyone to eat but I wasn’t going to touch.  I sure could have gone for some low fat chocolate milk after that was done though.  There was none!

It was a great way to bring in the new year with my marathon maniac buddy!  Big thanks to Willie for playing chaffeur and taking care of us!  It was greatly appreciated!