To be honest, we were in Beijing and we weren’t really worried about eating clean.  It’s really hard to be picky about what you’re eating when you don’t speak the language and have no idea what to be asking for when it comes to food preparation.  Most meals were a victory because we navigated the system! 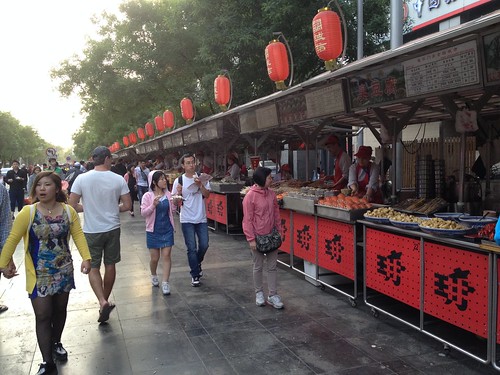 Some places had English translations on the menu.  Others had pictures from us to choose from.  A lot of places just had menus in Chinese which meant we couldn’t eat there at all.  99% of the people didn’t speak a lick of English and we only knew enough Chinese to get by and we definitely couldn’t read Chinese.

So we ate.  Some things I learned about the Chinese:

1. They don’t eat a LOT of meat.  There were meat dishes but the amount of meat on the plate wasn’t that much.  There were a ton of veggie fillers.

2. Eating in China was cheap!  Chinese people are offended by tips so you don’t do it.  Each meal that Willie and I ate was probably $15 or less and we had a lot of food! We never paid more than 110 RMB for any meal.  It was nice.

3. Chinese people love their carbs!  They can get a way with it because they walk and bike everywhere though.

4. The street markets were the best place to find good food! 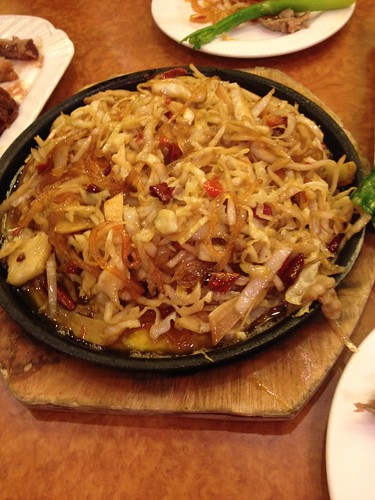 The hotel concierge pointed us to this great little place not too far from the hotel.  We walked there and they were waiting on us.  We ordered dumplings, Willie ordered some duck and I ordered cabbage noodles.  Willie was loving my cabbage noodles.  That was the first score of the week! We went to that restaurant twice! 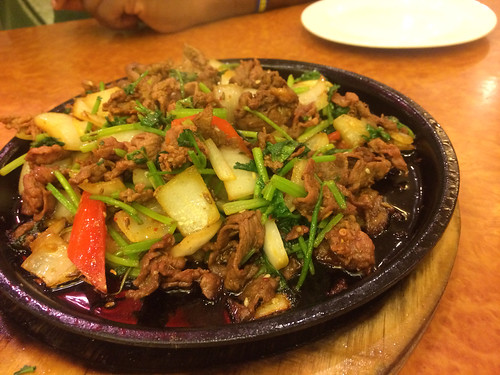 We went back the second time and I ordered the noodles again and the Beijing style beef which was another hit. It tasted a bit like a fajita meat! 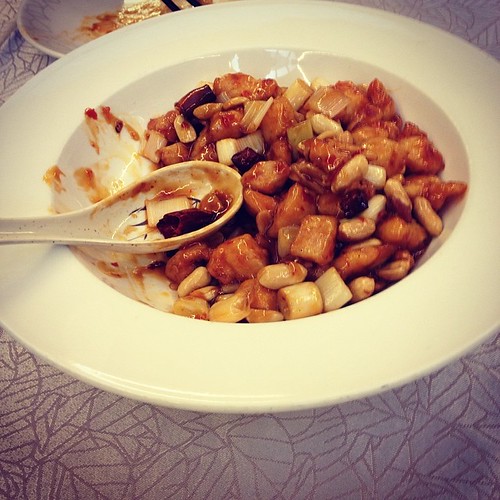 Our second lunch day, we hit up this place not too far from the hotel.  Not my favorite place but it was cheap.  Willie ordered Sichuan Chicken and it was delicious. It was chicken, pine nuts, peppers and onions.  It was soo good! 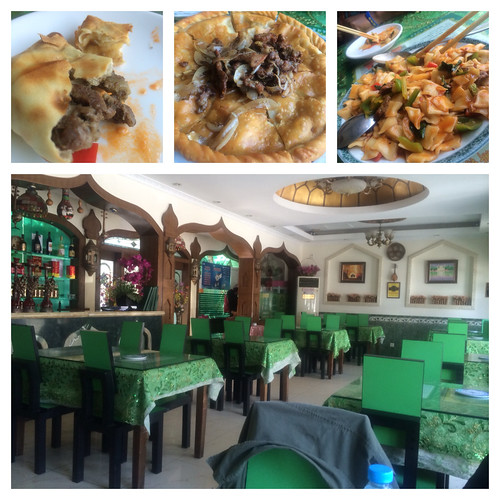 On our next to last day, we finally made it the Crescent Moon which a Chinese Muslim restaurant.  We ordered some noodle dish which was just ok.  But the lamb dumplings and this beef filo dough thing were off the hook!  Well worth the many miles we walked to get there including a very long walk through a questionable hutong! The people were even nice enough to let Willie and I come in before the restaurant even opened which was great because we were trying to waste about an hour worth of time until the place opened.  For me, this was the best food we had all week! 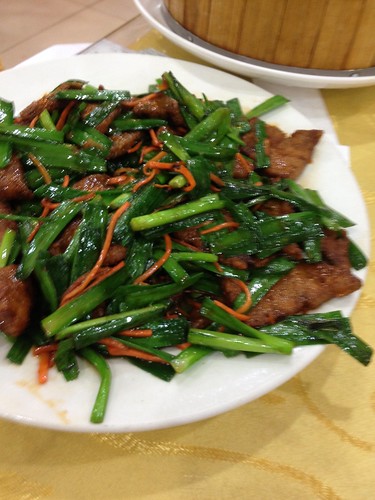 Another not so great hotel concierge pointed us in the direction of a restaurant that had no English but came equipped with pictures.  We ordered a mystery meat that Willie said was liver but quickly changed his mind to mutton!  All I know is, it wasn’t beef and I didn’t eat too much of it.  I stayed with noodles this time around. 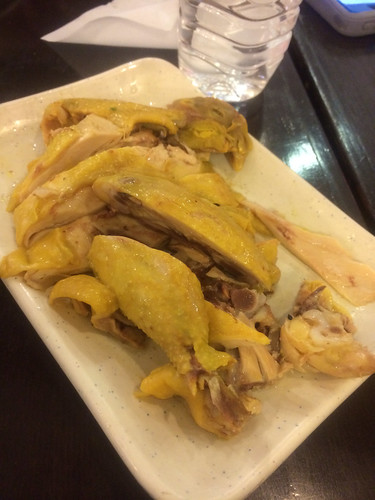 The salt and vinegar chicken at the Shanghai restaurant was a total miss.  I ordered it but only had one piece.  Willie really didn’t like it and was taken back by the yellow chicken.  But the buns were good!  I couldn’t complain about eating the buns! 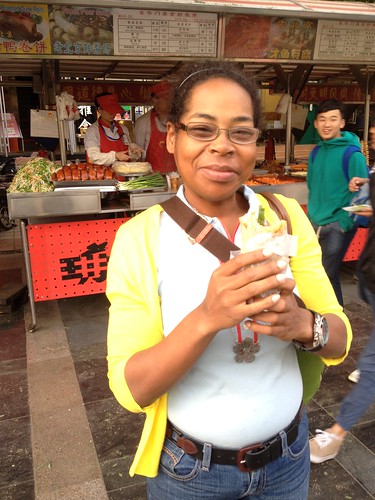 The duck filled wrap at the Wangfujing Night Market wasn’t my favorite thing.  I could have lived without it and it was really messy to eat on the go.  Willie ended up finishing it off for me and it end up down the front of his shirt!

I loved going to Night Market and Snack Street (even though snack street was a little scary because it was really tight in there.) 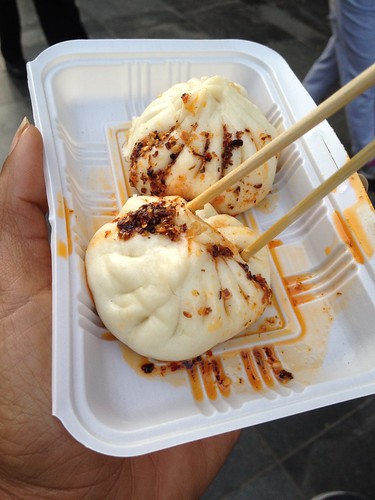 I loved the bao (buns), which are usually filled with a tiny bit of meat. 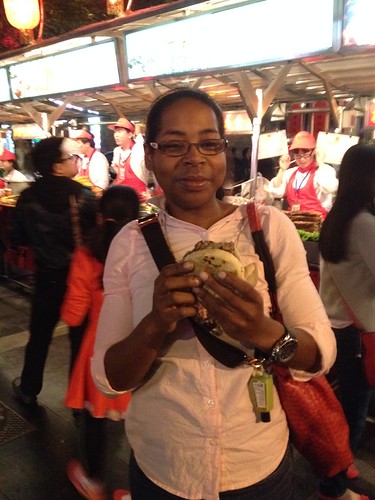 I loved the steam stuffed buns too! This one was shredded chicken and was probably my favorite thing eaten on the street! 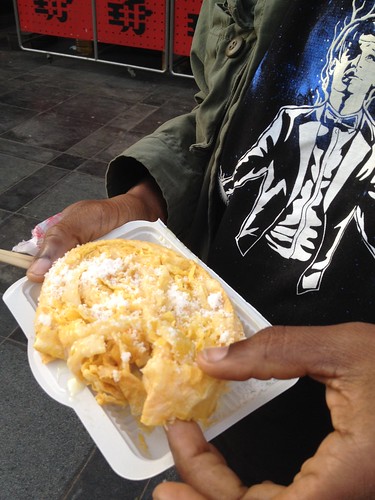 Willie had some pancake thing! 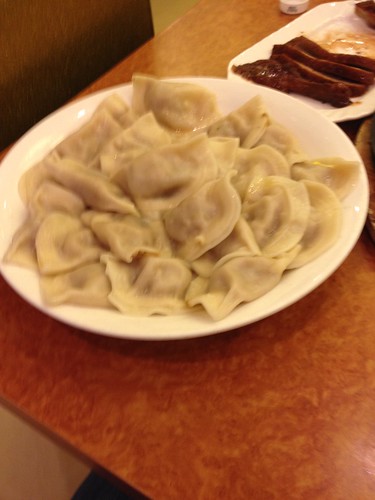 We also ate a lot of dumplings while we were there. Willie said he’d be ok if don’t see these for a couple of weeks, but I really enjoyed them. I really liked learning how to make them too! 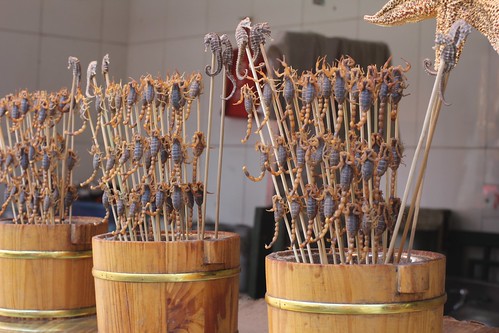 We learned very quickly from our cooking teacher that most locals don’t eat stuff like this; it’s really only for the tourists. These tourists didn’t eat it at all!

Breakfast in china isn’t what we consider breakfast so most mornings we just woke up to eating PB&J sandwiches.  We brought along all that stuff with us so we wouldn’t be left hungry.  We really didn’t know what to expect.  But we knew we didn’t expect to pay $75 a day for breakfast at our hotel! Beijing locals don’t really do rice they are more on noodles which is definitely something I wasn’t expecting.

And we decided to skip out on the roasted duck that Beijing is famous for purely because we had been spoiled the entire time we were there and laying down $100 on a meal just wasn’t worth it to us!

But the food was amazing and we walked around a lot to earn those meals!