It was a busy weekend! I planned to post on Friday but I decided to volunteer my time for the race instead. I hope you guys understand! I didn’t get a chance to help out a ton this year so I wanted to do my part to help out.

On Friday night, we had our annual running group pasta party! A lot of people showed up this year which made me happy. 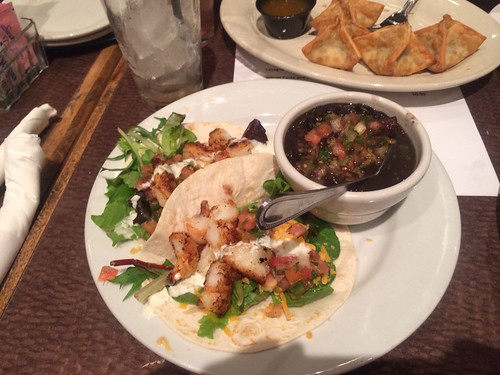 We got there early to order off the menu before the masses arrived. So glad we did that because a bunch of folks were there to enjoy the pre-race festivities. I ordered fried pickles (no picture because I passed them along the able) and grilled shrimp tacos. I forgot to tell them no cheese so it was a pain picking that stuff off those tacos. Jes ordered this wonton thingys that looked really good, but I didn’t have one! 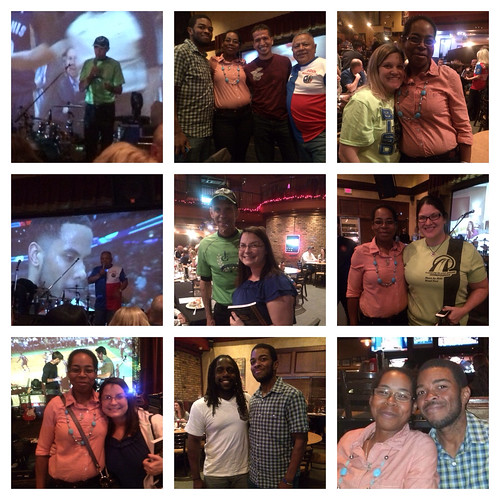 It was a fun time hanging with friends and I didn’t take enough pictures with everyone. The whole weekend just seemed rush rush rush and I was trying to take the time to enjoy it but I felt like I was constantly moving. Felix spoke to the group and Jeff Galloway spoke after him. It was a really great time to get with such great people. 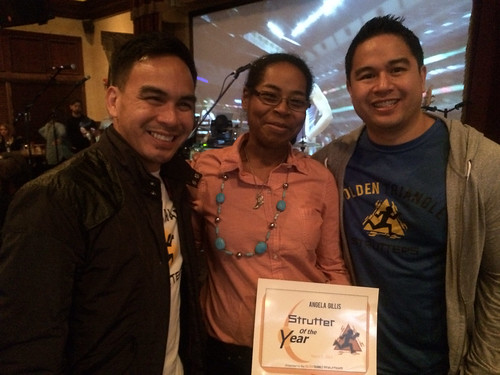 And the big surprise of the evening: I was honored with the award of Strutter of the Year! I almost cried, ok maybe I did cry. I have no idea why I was picked but I was. Honestly, I just like to run and I like to motivate people, everything else is just a bonus.

I guess this was a bigger deal for me though because this time last year at the pasta party, Willie and I sat in the corner and knew no one. We had both just really started running consistently and everything was new! This year different story and it’s just nice to know that these friends I’ve made along the way think I’m doing something cool! My heart is filled with love and happiness. My cup runneth over with joy and happiness. Thank y’all so much for the award because those two guys have motivated me to accomplish much more than I ever thought was possible. It was Jeremy who convinced me to run my first RnR race and I haven’t looked back since that moment! I remember being so scared to run the race because it was two weeks after the Gusher but I did it!

Being apart of this running group has done so much for me.  It’s pushed me out of comfort zone in making friends.  It’s pushed me to run consistently, because I never really did before.  It’s changed my spirit!  I run for the fun of it.  I run to motivate and inspire others. BUT these people in this group inspire and motivate me with their stories, their smiles, their speed and their friendship!  This is the best running group.  I am glad that I showed up that one day in February to a Wednesday night run, even though I was scared as all get out to go.  That day really changed my life.

This is the thing that means most to me in my running world above everything else. I can’t wait to hang it over my medal rack!

Oh and we make cool videos too because we’re happy!