Running the Kentucky Ale Horse Capital Marathon was a biggie for me.  This is the race that finally got me qualified for the 50 States Marathon Club. I decided at the last minute that it was doable and I asked around to see if anyone would want to go…and bam someone wanted to go.  The dream became a reality and we road tripped to Kentucky.

We stopped in Memphis on the way there which was about 8 hours in but I wanted to stop to show Lauren where I attended college.  No pictures of Ole Miss, which we probably should have done, but we spent about an hour in Oxford.

On Friday morning we hit the road again to head to Kentucky.  This was the first year for this race so we didn’t know what to expect.  I know I expected small and some disorganization.  That is definitely not what we got.  Packet pick-up included a small expo but bigger than most small races.  I was impressed. I was running the marathon and Lauren was running the half marathon. 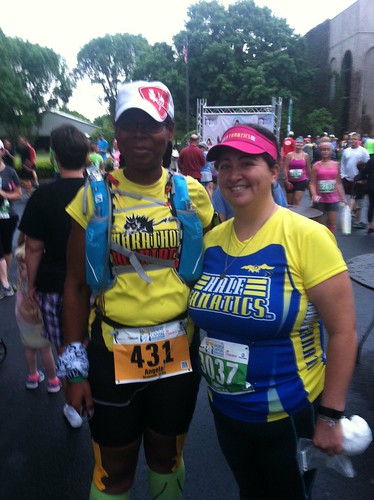 On race morning, it was sprinkling, nothing major.  We were armed with our panchos. The race started at 7am on Saturday…or it was supposed to.  Apparently there was some traffic issues and the police forced a delay.  At the start line, Lauren and I talked about if this course would be hilly but we thought it couldn’t be that bad.  Spoiler alert: it was BAD!

The sky cleared for a bit and the race started at 7:30 am.  I really wish it would have started on time because I was ready to go.  I must say I went into this race with the “fun face” and not “game face.” This had to be a fun race because we spent so much time in the car driving.  I lined up with the 5:30 pacer and planned on staying close by.  It started to rain, everything was soaked, but it was still fun. 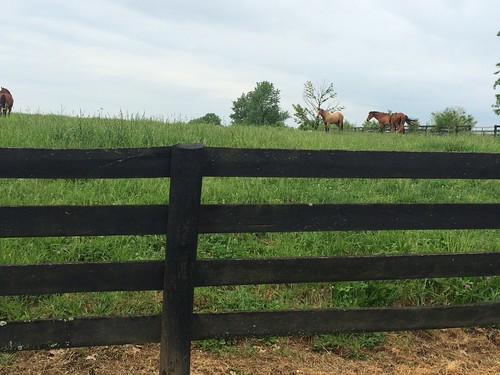 The view was amazing. The horses were so pretty! I really wish I would have taken more than one picture because it was amazing.  It was something nice to look at over those not so gentle rolling hills.  Those hills were evil.  Rolling hills that just kept running up so even a downhill was still going uphill.  I don’t know if that even makes sense but it was rough. 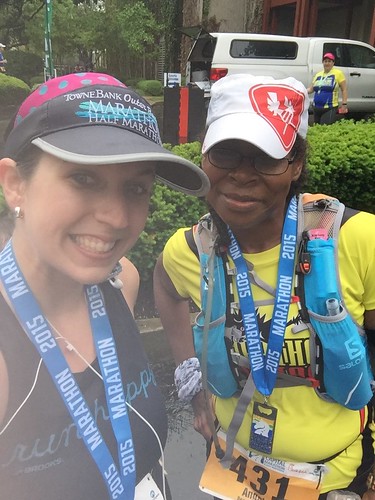 Around mile 14, the terrain was killing my IT band.  I had taped up early in the morning but the really bad rain pretty much messed up my taping job.  Luckily, I knew what to do after the Revel Rockies disaster and I was able to keep moving.  And then I met up with Megan.  We chatted and had a great time.  The miles really rolled on by when I was running with her. 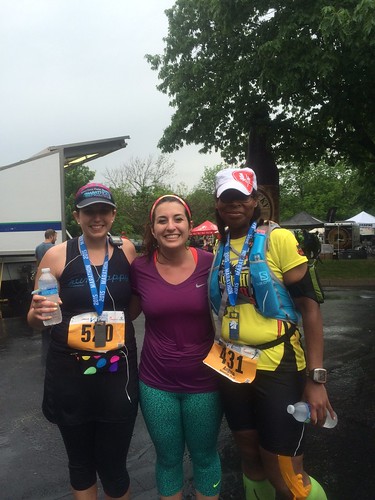 And then her friend Grace joined us for a good finish! 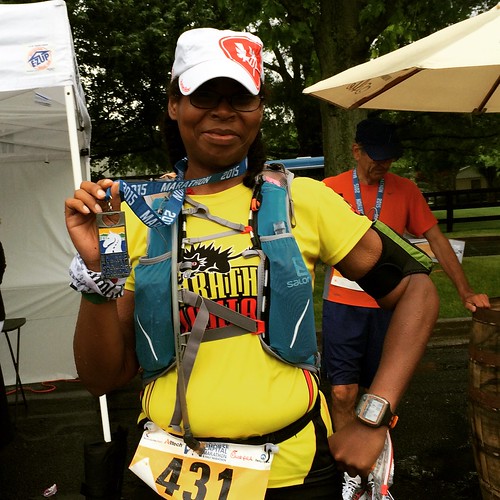 I finished the race in 5:47!  The marathon times are getting slower but it’s getting hotter and later on in my marathon season.  A finish is a finish at this point.  Plus, I get to talk to amazing people along the way and just have fun running without worrying.  It was also great to have Lauren screaming my name when I came across the finish the line.  It’s a moment I won’t forget.

Every time my socks and shoes had finally dried, it started to rain again and the process started all over again. But the race was great!  I was impressed with the race.  The roads were still open to traffic and I felt like people were driving way too fast down those roads, especially when it was raining.  The aid stations were a little far apart for this time of year, but it wasn’t that big of a deal.  The volunteers were fantastic and really enthusiastic.  It was a great time. 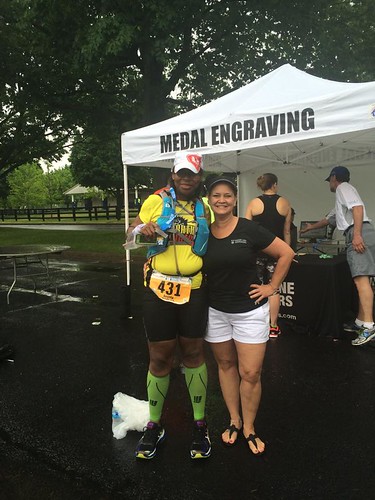 I saw some old friends and met some new ones.  I was so glad to see Kris at this race, it made the drive worth it! I do hate that I look like a bloated mess in all the after pictures so I must explain.  I had to stop to use the porty around mile 10 and it’s hard to get wet tight clothes back on the right way.  I just had to go with it.  This is what you got!

This was a REALLY great trip! It was a growing experience and a lot of fun.  I guess that’s what the quest is really about.  Thanks to Lauren for putting up with my constant talking. I regret I didn’t have my beer and no bourbon but I gained so much more from this trip.

I’m glad I found this race by accident because it’s definitely been one of my favorites this year. I’m glad Lauren decided to go with me because it was so much fun. So now I’ve reached one of my mini-goals on my big goals list.  I can join the club now!  AND state #11 is coming in two weeks!  I am blessed to be living this life right now.  Thank you for all of your support and love along the way.

It was a busy weekend! I planned to post on Friday but I decided to volunteer my time for the race instead. I hope you guys understand! I didn’t get a chance to help out a ton this year so I wanted to do my part to help out. On Friday night, we had our annual running group pasta party! A lot of people showed up this year which made me happy. We got there early to order off the menu before the masses arrived. So glad we did that because a bunch of folks were there to enjoy the…

END_OF_DOCUMENT_TOKEN_TO_BE_REPLACED

There are lots of races I get for free or get a discount code for, this was not one of those races. It was worth every penny I paid for it (and it wasn’t that expensive) because of the perks that came along with it. The race directors were amazing and their staff/volunteers just the same! This was one EPIC event! Jes and I early started! She’s a 6 hour marathoner and she thought she needed to extra buffer. I needed to take it slow so I could run the Gusher close to 4:35-4:50 this Saturday. I also needed it…

END_OF_DOCUMENT_TOKEN_TO_BE_REPLACED

I’m a racing fool!  I like the energy and it keeps me motivated to run!  Sometimes I can just go out there and do it and other times I need people screaming at me to keep going.  It’s what works for me.  The Biggest Loser Run Walk series is going across the country for these events.  Originally we were supposed to do the one in Beaumont but it was moved to May during the time we couldn’t do the race.  Race organizers were nice enough to let us transfer our registrations to another race so of course we chose Mobile…