I’ve have some running events coming up but my focus has been on China.  Everything until that point is just training.  I shouldn’t be pushing for PRs or making a certain time.  I’m more interested in getting us on our feet for longer periods of time.  I’ve tried to explain to Willie the physicality of what is happening is the least of the problems; it’s the mental aspect of what is going to happen. 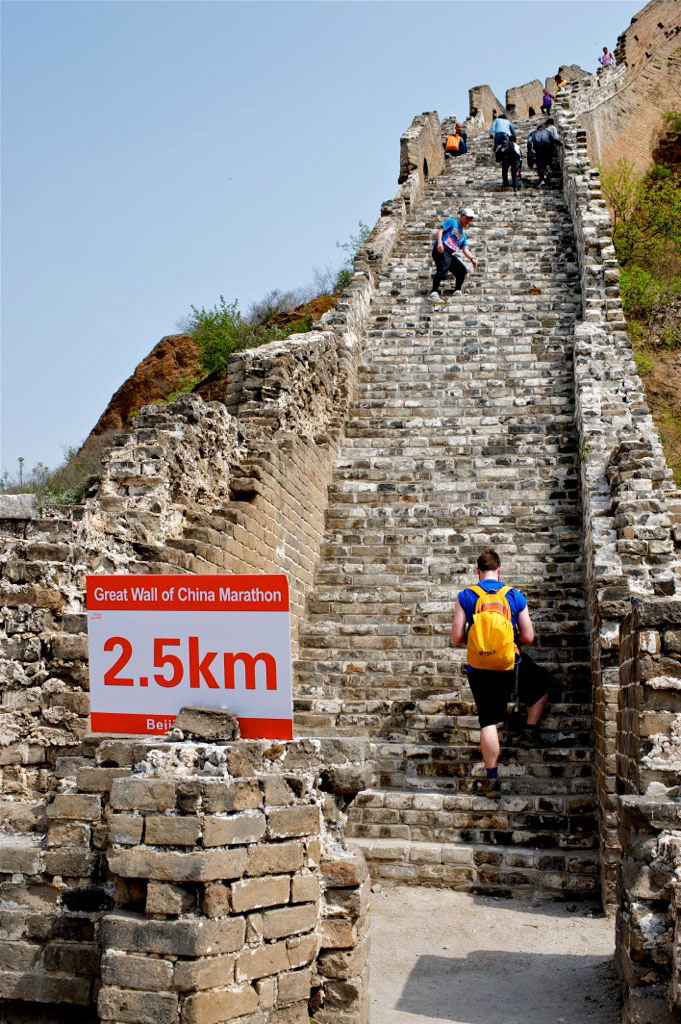 I don’t know what I want to run The Great Wall of China Marathon but I do!  I guess I want to do it because it’s something most people will never do.  It’s going to be an experience Willie and I will share together and will talk about for the rest of our lives.  I want it to be an enjoyable experience too so I want us to be as prepared as possible. When I signed up for the race I didn’t know it was going to be mostly on the wall so I am a little frightened by this.

Not so frightened where I won’t do it.  I will be running on history people and I might even loosen some of that history along the way!

I’m working on building my upper body strength because I know there will be parts of the wall we will have to pull ourselves up those stairs.  This morning I got up to do some weight training!

Today I think I’m going to do some stairmaster and maybe a little bit of running.  My foot has been bothering me a little.  I’m kind of freaked that it might be a stress fracture but the pieces aren’t adding up to that being it. I’m hoping it’s just a muscle or tendon strain.  If it’s not better, I’m going to go to the doctor! With that being said, you might think it’s crazy that I’m about to start talking about running a race this weekend.

I don’t know if I should trail run or road run!  It’s not about me really though.  I want Willie to get some experience running trails because there will be portions of the The Great Wall race that exit the wall and we hit some trails.  I need him to know the importance of picking up your feet when you’re tired.  I also want him to know what it feels like to run on something other than the road.  I’ve run the trails and I love it but he’s never done it! It’s a different ball game when you run the trails and I just think it’s something he needs to experience.

BUT I know he would rather road race because it’s closer and familiar to him.  (Oh and the road race medals are pretty snazzy!) It’s a double edge for me too because I am comfortable with the road and I fear injury running the trails.  I’m not the most coordinated person. But all of this might not make a difference if my foot isn’t better.  I will say this, it’s better now than it was last week so I’m optimistic!  I got a new pair of running shoes but I haven’t really been running.

So what do you think we should do: trail run or road race?

*Willie and I were given free bibs to this race.  The topics and opinions addressed on this blog are truly my own.