Saturday night I ran a half marathon in Roswell, GA! I wanted to do something fun because I feel like I’m always doing these super serious races and I thought I just needed to chillax. This is my 6th half marathon of the year and I think I have 4 or 5 more to go plus my marathon! This was the most miles I’ve ran since the Rock n Roll San Diego Half, but I have been running consistently. I wasn’t trying to break any records here and I really wanted to keep a nice and steady pace throughout the race.

This was the first time I’ve ever done a night race and I really didn’t know how to prep for it. I didn’t know what to eat or when to eat. This was a huge learning experience for me and something I did on my own. I had to leave my cheerleader/husband at home because I was going to be gone too long for him to tag along. Work, who really needs it? I was worried when I signed up for the race it was going to be hot and humid and I was going to pass out. Things changed the week of the race the forecast called for a high of 70 degrees and rain. I became less worried. 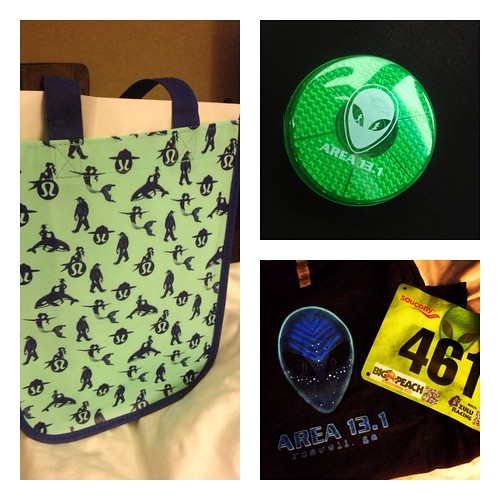 I picked up my bib/packet on Friday night when I rolled into Atlanta LATE but still made it to Lululemon in time to get it. Everything was very organized and easy. Everything came in a cute reusable bag and the shirt for the event was super cute. Not really a shirt I would run it because it was cotton, but the alien on the front did glow in the dark. Maybe it would have been helpful to run in shirt, but more on that later. And there was a blinking alien which was so cute and helpful! 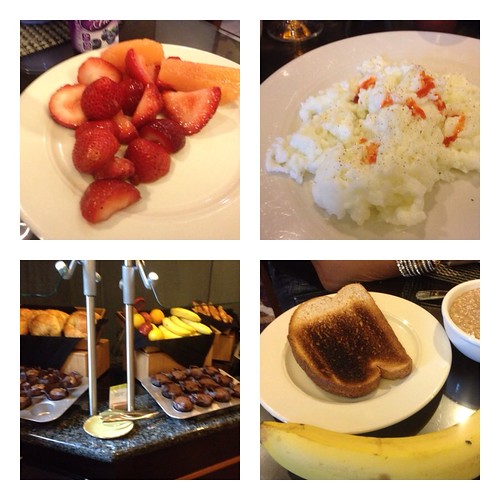 The next morning, I woke up and ate free hotel breakfast with my mom. The spread was pretty impressive filled with croissants, muffins, sausage, eggs, fruit, potatoes, biscuits and gravy and bacon. Yep, it was filled with lots of things I couldn’t eat. Luckily, they made me some scrambled egg whites and there was oatmeal, fruit and yogurt. I like to stick with my normal things to avoid stomach issues, especially on race days.

The day was pretty dank and I did intend to spend the time exploring Atlanta with my mom but it was raining and I totally forgot Georgia was in another time zone which did throw me off a bit. I had been lacking sleep because of my travel mate. Plus, I had been driving a lot! I thought it was better if I could just rest. Before I did though I wanted to pick up lunch and of course I had to find some Lebanese food to eat! This was kind of iffy for me because I didn’t know if I should eat this before the race, but I know I needed to carb up and this is what I wanted. I was willing to take the chance. Luckily there was a GREAT place a few blocks from the hotel and the people in there were super nice. This was some good food for the $11 I paid for it and I got a butt load of food. 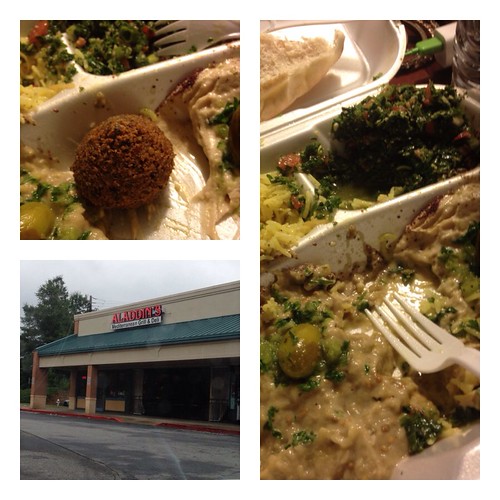 Tabbouleh salad, falafel, grape leaves, hummus, baba ganoush and Arabic rice. I decided to go meatless because I didn’t know how my stomach would react to it during the race. That was probably the smartest decision I made all day. I ate all the grape leaves before I realized I should have taken a picture of my food before I started eating them. These dolmas were sooo good!

I tried to go take a nap before the race but it just wasn’t happening. The mid day sandman wouldn’t come so I watched TV with my mom and ate my lunch. The race started at 7 pm but I wanted to be there around 4:30ish because of the parking situation. The race started about a mile from the hotel, but the road was too scary to walk and it was raining. I scoped it out before the race and parking would be extremely limited and I didn’t want to utilize the shuttle service if I didn’t need it. I’m not a local!

There was an incident at the hotel. The speaker came on and told us not to panic but there was a fire in the building and we had to leave immediately. I grabbed all my stuff and my mom and we headed down to the lobby where they were telling us it was a false alarm (due to multiple power outages) but it seriously smelled like smoke in the lobby but oh well. Everything turned out to be fine after the fire department showed up.

I got to the race and sat around. I ate some oatmeal around 5:00 and at 5:15 I took a nap. It was raining and I wasn’t going to sit out in the rain, so I sat in the car and took a nap for an hour. That was probably the second best decision of the day. I didn’t know if I should run with my rain gear, iPod and headphones and phone. This was a big decision for me, but I thought the rain gear might make me hot even though it’s running gear so I ditched it. I decided to keep my iPod and phone in the car because it was raining. I had a grand idea of making a video while running but I had to hang that up because I didn’t want to have to purchase new electronics. That is why the video is a little incomplete. More on that later.

The race started on time and there were a good amount of people there, not a huge crowd though. I was going to stick with the 2:15 pacer because I know that was something I could do and not push too hard. I stayed with the pacer for a long while, but I really suffered through the first 6 miles of this race and I knew I was going to have a horrible first half of the race. That is why I choose my pacer especially since I went tunes free the entire race.

At the 10k mark we looped back through the park where it started and the crowd and signs really pushed me so at mile 6.5 I had settled into a really great pace and I was feeling good. On my splits, these were my best miles of the race for me. The course was supposed to be flat but what is flat to a Georgian and a southeast Texan are pretty different. It wasn’t really hilly but it was hilly.

Around mile 9 is when I started having problems. The road became hilly and it started to get dark. At the last minute I decided not to bring my headlamp because they said the path would be lit. And there were SOME lights but not enough for me. I’ve worn glasses my entire life and night time has always been a weakness for me. Biggest mistake was not bringing my headlamp because I was forced to walk some sections that I just couldn’t see. I didn’t want to fall off a bridge or trip on the trail. Most of the race was on the road but we did run a good part on a trail too. Those were the parts that were extremely hard for me.

The second mistake of the race was not hydrating properly. I guess I thought since it wasn’t as hot as where I had been running that I didn’t need to hydrate as much. I passed on water stations but those water stations seemed to become more and more spaced out as the race progressed. Plus the water was hot and that didn’t help the situation. I was dehydrated. At mile 10 I felt the side stitch coming on and at mile 11 it was just something I couldn’t deal with, luckily it coincided with the trail where I couldn’t see anyway. I was forced to walk a bit in mile 10 and 11 which sucked for me. I was trying to keep a steady pace even if it was slower than my normal pace for my marathon training. This was my long run for the week.

When mile 12 rolled around, I was in jog which was better than the walk but I decided no matter how uncomfortable I was from the side stitch I was going to pick it up and run it on home. The side stitch started to go away toward the end of mile 11 after some serious stretching and it only bothered me for a little bit. 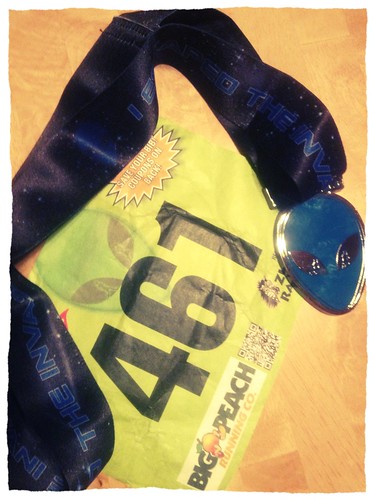 I finished the race in 2:24 which is FAR from my best but wasn’t my worse. I feel confident that if I could have seen better and not walked so much in those miles I would have finished closer to the pacer I picked in the beginning probably around 2:19! I blame this on the walking but like I said before I wasn’t trying to break any records here. I have 8 more races this year and this was the first race back! This race kicked my butt. I was going to do an after video, but 1. It was dark and I’m black and I wasn’t showing up in the camera 2. I was so beat up after this race it wasn’t funny and 3. I didn’t have anyone to hold the camera for me. It sucks doing races by myself where I know no one, but I’m working on pushing past my comfort zone and doing things on my own. This was something I had to do! The medal is super cute though and totally worth it all! I ran the race for the medal, I cannot lie! 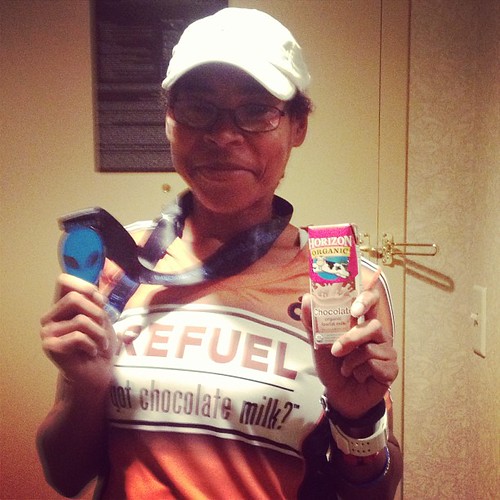 When I finished the only thing was thinking about was chocolate milk (low fat) and my Peanut Butter power bar! I was really beat up after this race but I expected it but I am so glad that I did it. I really needed that chocolate milk after the race and I felt better in the morning because of it!

The roads were narrow for the amount of people, not enough lights and the water was hot and I think there was only one sports drink stop on the whole course but those are all minor things. I know these races are hard to put on every year and this one was well organized, especially it only being the second year. Would I run this race again? Yes and I plan on it next year but maybe with some friends!