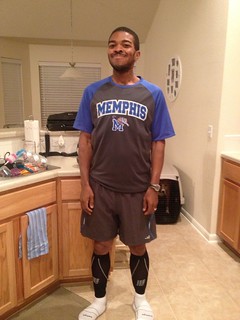 I ran my first 10 mile race on April 14th! This was my first long distance run. Before this race I had only run 5K races with a finishing time around 36 or 37 minutes. A couple of days before the race, Angela bought me a new pair of running shoes, running socks, and calf compression sleeves. When I ran the previous 5Ks, I had been running in a pair of old Nike running shoes that really needed to be thrown in the trash. The new shoes were Brooks running shoes and when I first put them on I noticed that they were super lightweight. I was super prepared to run the race and hopefully improved my previous 5K race time. Let’s get back to race day.

When we got to the race event, I got nervous. I tend to not get excited for things until right before something starts. This particular race had me nervous because I’d never run anything more than a 5K. Angela was ready for the race. I wondered if she had ever felt the same way when she did her first long distance race. We waited in Corral 7 of 10 until the race started. When the race started, I put on my headphones and just concentrated on moving my feet and listening to the music.

My playlist for those first 3.1 miles was Daft Punk’s Alive 2007 album. Speaking of the first 3.1 miles, they went very smoothly. I ran to my Spotify playlist until I came running up to a band along the course. I turned my music down to hear the local music of Austin bands. There were a lot of good bands and there were some I just didn’t care for. I was convinced that I would easily be able to run a 5K without walking breaks since I’d done it almost a month earlier at the Gusher 5K. With every mile, I checked my heart rate monitor to gauge my pace and just enjoyed seeing parts of the city of Austin.

By the time, I got to the 5K marker; I had run it in 34 minutes. I shaved 2 minutes off my previous Gusher time. I was so happy that I started posting status updates to Facebook with every mile. I think people really enjoyed my steady stream of updates.  I ran the first 4 miles with a walk break and decided to walk mile 5 as to not wear myself out before the end of the race. When mile 6 came around, I was back to running. I switched my music playlist to songs from Fall Out Boy, Macklemore, Phoenix, and Justin Timberlake. , It was a little hard to get back to running because I started to have a little problem with my right knee hurting. I’d never had a problem before. I figured it was just from taking a break from the running. I ran miles 6 and 7 but I knew that the race was starting to get a little difficult for me because my calves and quads were starting to tire out. I pushed through until the end of mile 7.

With mile 8, I took another walk break. I enjoyed it since I’m sure my calves were not. Mile 9 came and my calves were on fire. I tried to run and my legs were just not having it. I had to take frequent walk breaks in between brief runs, Mile 10 came and I was super excited to finish the race. I finished the 10 mile race in 2 hours and 3 minutes. 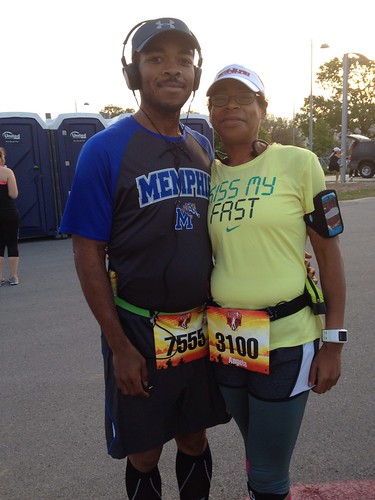 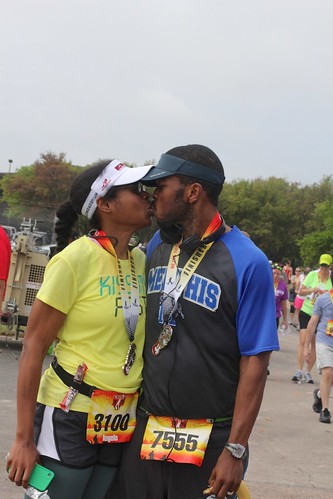 I was pushing to finish the race in less than 2 hours but since it was my first long distance race I took it for what it was. I’m just glad I finished it. I went searching for Angela and she nearly knocked me over because she was so happy that I not only ran the race but that I also finished it. She told me she was proud of me. I was actually pretty proud of myself. If you told me back in January 2011 that I would be running a 10 mile race in 2013, the old me would have laughed and shooed you away. 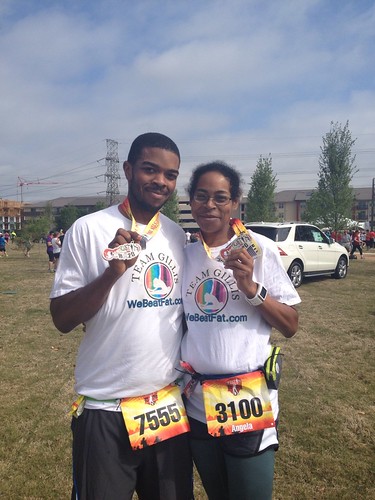 I’m glad I ran the Austin 10/20. It was a great experience running with so many different types of people. I’m glad Angela and some of our friends were there to witness me finish my first 10 mile run and to get my first race medal. It is a moment that I’ll never forget.