Only bad thing, I missed the 5K on Friday night because I got busy and lost track of time. No bueno. But on Friday, i went to my first tabata bootcamp class. Talk about intense! They are offering the classes at my gym so I thought I would try it out. I was sore on Saturday morning.

Saturday, I tried to run some miles outside because the weather was tolerable. Only problem was my bladder didn’t want me running. The last mile of my run was horrible because I had to keep stopping. I was no where near a restroom. It was kind of rough. I had to stop at 3 miles, even though I planned on 5. 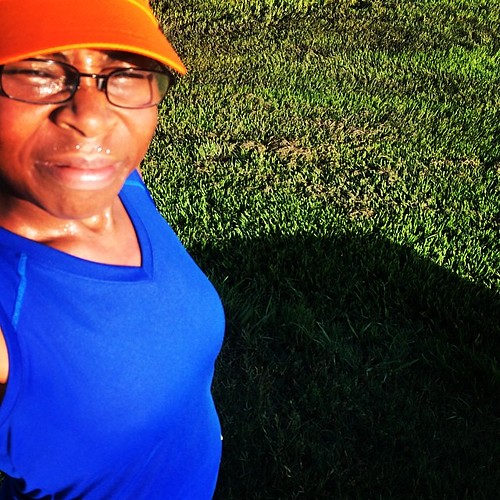 Sunday morning, I got up early to do 5.5 miles and it was a humid hot run. That’s when I decided that I’m going to not focus so much on marathon training during the summer. It’s just too hot and humid right now to be logging LONG miles.

My only other option is to start in the evening which might be a little hard for me because I go to sleep VERY early. Waiting to run major miles at 7:00 pm doesn’t sound like my idea of a good time. it sounds like torture. Last year, I got up way early sometimes 3AM, to log my miles. Man, I was committed then. I’m not feeling that committed right now though.

I’ve been doing a lot of running on the treadmill lately, but it’s left my legs feeling dead and useless.  My legs were actually hurting and I struggled through a lot of runs.  I know I can’t keep doing that.  It just doesn’t seem like the right fit for me.  Hopefully this weekend, I’ll get a chance to run the trails.

I don’t really want to bring up my skin color but it’s an issue.  It’s HARD being an endurance runner during the summer and be dark skinned.  I feel like I’m absorbing so much more heat and it kind of makes it hard to push on sometimes.  I do everything I should do to stay hydrated and cool, but this is one thing I can’t change.

What are you thoughts about marathon training in the summer?