Sunday I rode my bike 68 miles.  That is officially the longest bike ride I’ve ever been on and to say I was nervous was a huge understatement. I teach spin all the time but being on the bike is a totally different thing. 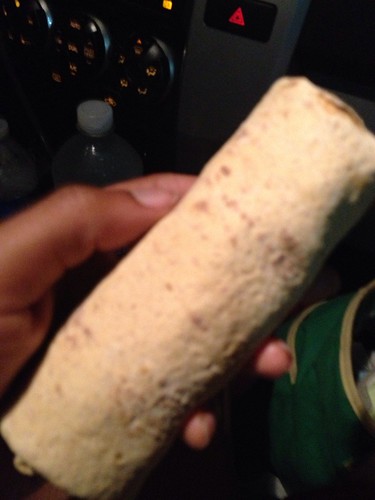 Before I get too far into the story, I must share with you the yummy breakfast Willie made me. It was soo good and I think I might make it a race day staple now. He took a Flatout Bread and spread some Better’n Butter (but regular peanut butter would work too) and sliced banana and rolled it up. I bet it would have been DELICIOUS grilled too! It was pretty much the best thing I’ve ever eaten. My favorite combo is peanut butter and banana! 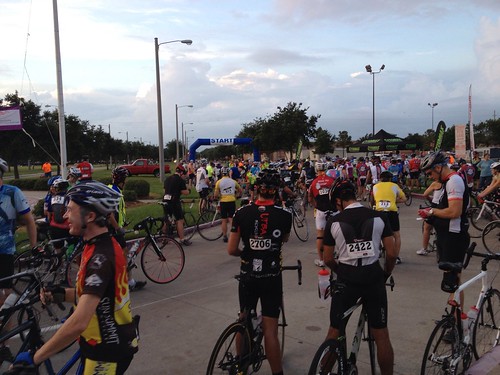 My biggest anxiety was having to change a flat tire. Mainly because I’d never had to change a flat myself and wasn’t too sure I could do it on my own.  Guess what y’all?  I had a flat not even 5 minutes into the ride.  I’m pretty sure I know what caused it, but I was glad that it happened at the beginning so I could get it out of my system.  I had the SAG guy help me out and got the sucker changed. I watched very intently so I knew what to do myself.  I will admit when it happened and the group left me behind, I didn’t think I was going to continue.  It started to rain and the little bit of confidence I had was being washed away with every rain drop that hit my face.  I called Willie who hadn’t left the parking lot yet and I know he was waiting on me to make a decision but he knew what I was thinking but never said it.  Silently, I decided to push on because this was something I said I was going to do.  I said I would push on as far as I could even if I had to do it alone.

The first 11 miles I was scared and timid.  I was completely out of my element and I constantly questioned what I was doing.  I was afraid to speed up.  I was afraid to pass anyone.  I was afraid of being alone so I kind of stuck with some people but eventually I realized they were going too slow and I had to pass them.  Once I got out of my head and starting having fun the ride got easier.  I was kind of upset because when I changed my tire my bike computer got messed up so for the first 11 miles I had no idea how far I traveled until I made it to the first rest stop.  I quickly fixed the problem and continued on my way.  The first 11 miles weren’t that tough.  I chugged on and made it to the second rest stop which was 12 miles away and I found the rest of the group.  And they were very happy to see me which made me happy. 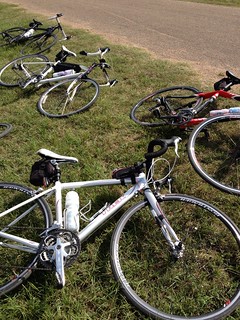 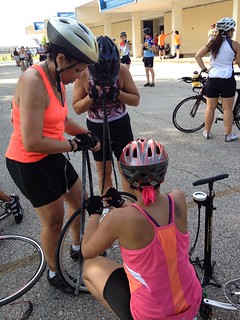 I was happy to be reunited with the group but before we could head out, someone got a flat tire and it needed to be changed. No one really knew how to fix it but they still managed.  Something went wrong with the tube so the professionals had to step in.  I watched very carefully as the bike mechanic changed the tire quickly and effectively and now I know I can really change a flat.  This bike ride was a VERY educational experience. For the rest of the ride I rode with the group and I had to time of my life. 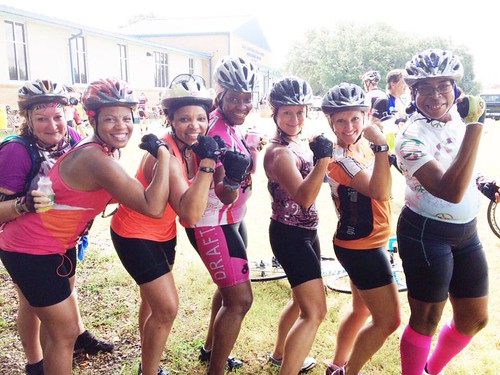 The rest of the ride went pretty smoothly. The toughest moment for me was getting to the next to last rest stop. It was the longest stretch, 16 miles, and it was hot and windy. It was very hard to battle the wind and keep a strong pace. It was kind of up hill a bit too. This was a very flat ride. 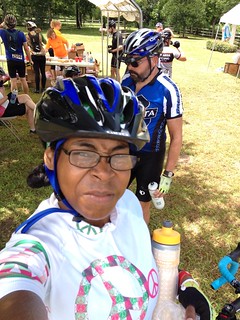 There were a few “hills” which most people would laugh at me for calling them hills. I wasn’t prepared for it but that’s what makes pretty legs, right? When I hit around mile 50 during that stretch I was kind of ready to be done. Is there a “wall” in cycling? Because I was about to ram right into that sucker! Thank goodness for rest stops and good friends! 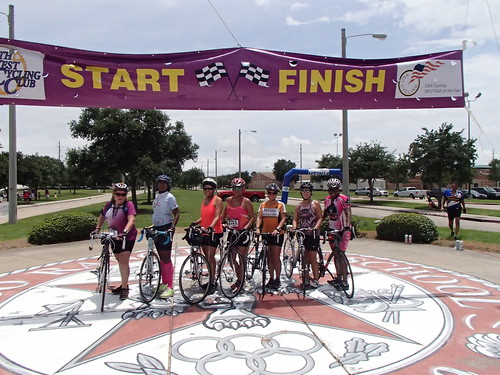 I conquered 68 miles on the bike with the help of some good friends and I had a fabulous time. I can’t wait to do it again. Do I love it as much as running? Nope! But I still really enjoyed it and it is something I will keep doing every chance I can get. I’m going to be a busy lady!

I started at 7:00 am and finished about 1:30 pm. I did make a lot of stops and had my own tire fiasco. 3100 calories later I was begging for some chocolate milk and my husband delivered! I was one happy girl! I was definitely ready to refuel because I had to pick up my marathon training the next day. I needed it! 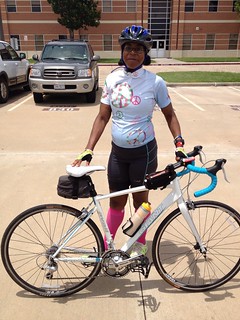 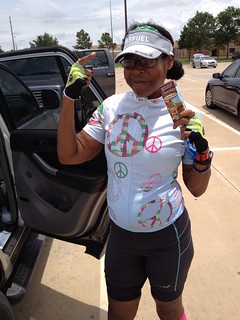 Things I learned for 68 miles of biking:
1. I need to get clipless pedals. I was going to buy some but I didn’t want the first time I was using them to be on this long ride. Halfway through the ride I came to realization that I need to get them.
2. Male cyclists are some good looking men. Willie didn’t want to hear it, but he was the only person around so I said it out loud.
3. Not sure cycle people are as friendly as running people. That is just my observation and I don’t mean to offend anyone.
4. I need to learn how to eat and drink while riding. I’m not coordinated enough for it. I always felt like I was going to tip the bike over every time I thought about taking a sip of something. I am going to have to work on this!
5. Cars on open roads scare me. If I see someone riding a bike or running I tend to slow down and not speed up. There was a lot of speeding up going on Sunday.
6. There was lots of manure in the road and when it was raining I’m pretty sure some of that got in my mouth. And some flying very big something hit me in my mouth around mile 25. I’m just glad I wasn’t talking or had my mouth open because I would have had an extra batch of protein!
7. I looked like I was going to bust out of my cycle jersey. I got it on sale but I didn’t realize it looked so bad until I saw the pictures. You’re probably thinking she looks fine. I think otherwise. This is the reason why I hate loose skin especially in my stomach area. It has no where to go but just sit there!

This is all in my plan to complete a half iron man next year! Now I just need to get my swimming under control.

So what’s your long time goal that you’re working toward?