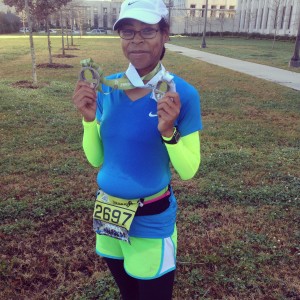 Posing with my medals. I did the Cypress 5K and the Louisiana Half Marathon that weekend.

Fear is a crazy thing.  It will make me second guess my choices, it will make me afraid to take a risk, it will hold me back in life. Fear always creeps up when I’m feeling the strongest to cast a shadow of doubt over my life.  I’ve been trying to figure out why I’ve been going through such a roller coaster lately with pretty much everything and it all comes down to fear!  Fear is a bad thing.  I remember being little and not being afraid of anything.  I went through life being my bravest self; becoming an adult jaded me.  I’ve become aware of things like danger and failure.  There are times I wish I could just return to the days of no responsibility and no fear.  Is that even possible?

I’ve let fear in my life the past few weeks.  I was feared that my grandmother’s passing would have a greater toll than what it actually took on my mom.  She’s handling things very well, but I handled her with a kid glove which was very stressful for me.  The thing is: I feared the worst and I didn’t have to do that.  She is fine!

I feared I would fail with losing the weight and keeping it off.  I went through this crazy thing about gaining weight because my clothes where fitting differently.  I constantly asked Willie if I looked like I was getting bigger because my pants were fitting differently.  I let fear creep into head.  Gaining the weight back is a huge fear for me.  The fact was my clothes are fitting me differently because my body is changing.  I’ve packed on so much muscle in my legs the past couple of months from all my running and spinning.  Instead of recognizing that…I went the fear route which really freaked me out.  I know I had been working out like crazy (not intention, just the way my teaching schedule worked out) and eating properly.  But I still let the doubt creep in.

Willie is the calm logical one most of the time and he does keep me grounded.  I suffer from an overactive imagination, always have and I always will, so it is nice to have my partner be there to bring me back down to reality every once in a while.

I feared I would get hurt.  This time last year I was sidelined from running which totally broke my spirit.  I was having serious issues with my IT band from rookie running mistakes.  I went to the doctor and I was referred to a physical therapist but didn’t go.  I should have gone. I would have been back running. So this year I was super scared I was going to get sidelined again but I knew better.  I was hurting last year because I was running too much with the wrong shoes with no stretching before or after running. I’m completely different now because I took the time to educate myself and learn the proper things.  I now know to ask if I don’t know something which I didn’t do before.  If I know all of this, why does it still creep in my mind?

On Memorial Day I’m running a half marathon and I’m scared to death for no reason.  Yes, it’s probably going to be the hottest race I’ve ever run on the hilliest terrain I’ve ever ran.  I have almost convinced myself not to go three times in the past three weeks.  But I know I can do it.  I’m probably more prepared for this race than any other race I’ve run this year.  I’m running the fastest, most steady pace I’ve ran since I started, but I’m letting weather and terrain get to me.  It makes no sense.

Even yesterday, I asked Willie if I should do a 30k night time trail race.  I was very pumped about it until I read something about cactus and then I started to think about if it rained.  The fear of injury came into the play and then I kind of talked myself out of it.  But I now know that I have to do it because I let fear creep in and tell me I couldn’t do it.  I can do it!

I don’t know what my problem is lately because I’m definitely one of those “at least you tried, even if you don’t finish” people. The person scared by fear was the person I was five years ago.  When we started the lifestyle change I decided that I wouldn’t let fear guide me anymore.  I changed because I know I can do anything as long as I put my mind to it.  I’m constantly pushing myself to be better and stronger, but it’s kind of like I’ve lost my fight lately.  I may have lost a couple of fights with myself lately BUT I WILL WIN THE BATTLE! This is my proclamation that fear WILL NOT win.  I will push to the end and be a warrior.  I will not be afraid to do something because I fear I will fail.  That is the old me and not the person I am right now.  I may have had a momentary lapse, but rest assured I AM BACK!