I love making stuff in the crockpot because it’s a great way to get a home cooked meal without all the fuss.  That was until I decided I was going to make crockpot lasagna. I was intrigued when I was fell down the rabbit hole of Pinterest and found a crock pot veggie lasagna recipe. 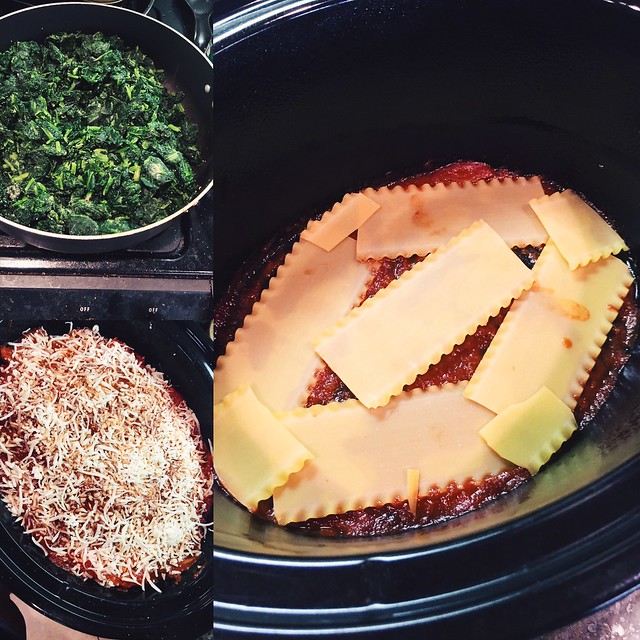 The great thing about the crockpot is setting and forgetting, but this time I feel like it was a little too much work. I was highly skeptical on Sunday while I was making this. I even posted on Instagram stories I wasn’t sure I would be making this again. It really depended on the final product.

I had to cook the spinach because I didn’t want the liquid from the spinach ruining the pot.  And I had to cook the meat because I thought that was the appropriate thing to do.  I am super picky about the way my meat looks and I wasn’t sure about putting ground turkey straight into the crockpot.  If it doesn’t look right, I won’t eat it.  And then making the layers was a bit time-consuming. (Maybe because we have a gigantic crockpot.) 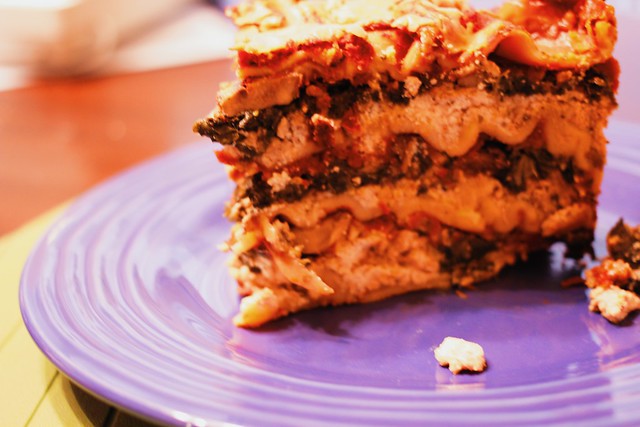 So what’s my final verdict? I LOVED IT. I’ve been eating it all week long. I will most definitely make it again. The one thing I would do different is not cooking it so long. There were parts of it that were burned from the crockpot. It was delicious, though. I was skeptical about the noodles not cooking and that’s not really something you know until you cut it open. But it was cooked all the way.

It was so delicious I’m thinking about how I can tweak the recipe a bit. I’m thinking I might try sweet potatoes instead of the lasagna noodles. But I don’t know yet. I may have been a lot of work on the front end, but it turned out pretty well.

Hello all!  I hope you know what I’ve been doing: working out, working and watching the Olympics.  There is no surprise there.  I thought today I would do a recipe round of chicken recipes because my need for chicken has gone to all new levels.  It’s the one thing I haven’t steered far from during my pregnancy so I do spend a lot of time looking up delicious recipes to try at home. At our home, there tends to be an leaning towards an asian profile in our foods. This would be something we would eat on the regular. Korean…

END_OF_DOCUMENT_TOKEN_TO_BE_REPLACED

I haven’t spent enough time in the kitchen, it’s time for me to go back.  Now I have a bit more time on my hands since I’m not constantly in training for something so I thought it would be the perfect time to start experimenting again.  I’ve been wanting bread of some sort and the idea of zuchinni bread came to mind. Everyone seems to love it; I should give it a try. Let’s be honest, zuchinni tastes like nothing.  That’s why healthy eating people put it in their foods as a filler and a way to get some veggies…

END_OF_DOCUMENT_TOKEN_TO_BE_REPLACED

I’m excited to introduce a new thing to the blog called the three way.  It’s something I thought would be fun, but it’s been a learning experience.  I’m glad I started off with something simple like an apple.  I’m a huge fan of red apples: gala, pink lady, jazz…I can never have enough.  Willie is strictly Granny Smith but that’s too tart for me. It’s fall and everything is going pumpkin again.  I love pumpkin but we should really enjoy the great selection of apples coming our way.  That’s the reason for the apple three way.  I went sweet this…

END_OF_DOCUMENT_TOKEN_TO_BE_REPLACED

On Sunday, we actually had time to prep out some meals.  It was nice being able to do that so I guess it’s fine the weekend was pretty uneventful. I’ve been dying to make a curried lentil loaf for a few weeks now, but I never had enough time to actually make one or I didn’t buy the right stuff from the store.  Basically bad planning kept me from making a lentil loaf. Here’s a video showing a little of the meal prep this week and I give you tips!  Watch for the tips! So what exactly is the lentil…

END_OF_DOCUMENT_TOKEN_TO_BE_REPLACED

We eat a lot of chicken, turkey and fish in our house. Red meat is limited, Willie eats it but I tend to shy away from it.  Eating lean meats is a huge part of our healthy eating plan. I’ve been trying to find some ways to enjoy chicken besides the usual ways. This week for lunch I made a chicken soup from the Runner’s World Cookbook.  I was in a pinch because I needed a meal for the week but I didn’t have enough time slave over the stove.  I needed to use the crock pot. I have to…

END_OF_DOCUMENT_TOKEN_TO_BE_REPLACED

Remember when I told you about all the good stuff in Eggland’s Best eggs? I wanted to make something different that featured the egg and I came up with a sweet potato hash. To be honest, I had to use what was in the house already. Willie always tells me I’m the master of making something out of nothing, fast. Hash usually has some not so healthy things in it like fatty meats or cheeses or whatever your heart my desire but I wanted to try a more health conscious version for everyone to enjoy. Sweet potato hash with an…

END_OF_DOCUMENT_TOKEN_TO_BE_REPLACED

How is everyone doing this week? How is your refrigerator feeling this week? It’s Thursday so our fridge is starting to empty out which got me thinking about some things I can’t get enough of lately. I love pumpkin, Willie hates it. That’s fine. That means I can eat all the pumpkin and not have to share. September came around and everyone went pumpkin obsessed. For some reason September triggers fall in people’s mind when it just triggers extremely hot and humid weather for me. I’m longing for fall though for “cooler” temperatures and more time with my running group.…

END_OF_DOCUMENT_TOKEN_TO_BE_REPLACED

Good morning everyone!  I hope the weekend is starting off just right for you.  Guess what I did this morning? I ran my taper run this morning. Taper is a blessing and a curse because I’ve been on a running high (mileage) lately but now it’s time to wind that down because the 26.2 is coming soon. I wanted to run more but I stopped for many reasons. I’m kind of battling some fatigue right now too. This week I attempted the to make my first “brownie” in a mug. It’s one of those things I don’t feel horrible about…

END_OF_DOCUMENT_TOKEN_TO_BE_REPLACED

This past weekend I took my bestie to Trader Joe’s and Whole Foods!  She had never been.  I was shocked when I found this out because I love those places.  Any health foodie loves Whole Foods, right?  Yes I know it’s expensive BUT you can find stuff in that store you can’t get most places.  It was taking kids to Disney World for us! One of my favorite things at Whole Foods is the food bar.  Remember that kale salad I was going nuts for last year? It’s so good.  I love the food bar because you can try lots…