Please excuse me while I talk about this race with great emotion.  This race was supposed to be my first race last year but we all know what happened.  This year it was Willie’s first marathon!  When we arrived in Memphis, I felt like I was running a marathon for the first time.  I was nervous.  I was excited.  I didn’t know what to expect.  There was only one thing I was interested in: watching Willie cross the finish line.

Willie has a strict “no running with me” rule and I had to abide by it.  It’s probably a good thing because I would have been shedding tears the entire race.  I was nervous for him.  I was excited for him.  I wanted him to do the best he possibly could. 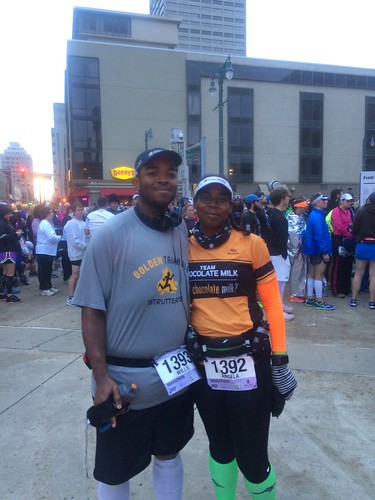 We arrived Saturday morning very early because we didn’t know what the parking situation was going to be.  It was nice to have some time to relax and act stupid.  What we weren’t expecting was the hella long line to check the bag.  When I finally made it through the medal detectors and checked my bag it was 19 minutes to start.  That was cutting it too close for me.

We decided to start the race together in corral 8.  I thought this would give Willie a little bit more time to finish if he started up front.  There was a six hour course limit with some weird actual time of day restrictions so I didn’t want him worrying about that.  The weather was cool but very windy! It was actually a perfect running day besides the wind tunnel that went on the entire race. 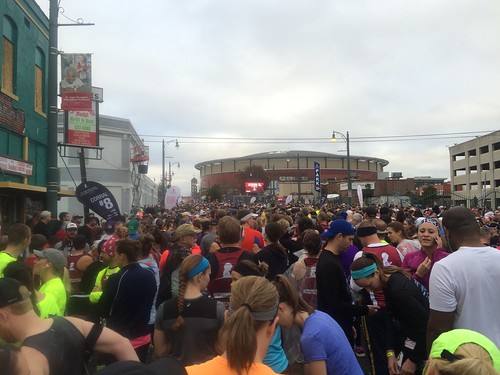 We started the race at 8:14 am and that was the last time I saw Willie until he crossed the finish line.  I knew he didn’t want me worrying about him and I know he wanted me to run my race.  There were a lot of people running the half marathon and marathon relay, but there was also a good amount of people running the marathon.  I planned to run with the 4:40 pacer for a bit but I never saw a pacer the entire race.  That kind of bummed me out because I wanted to push my pace just a little. 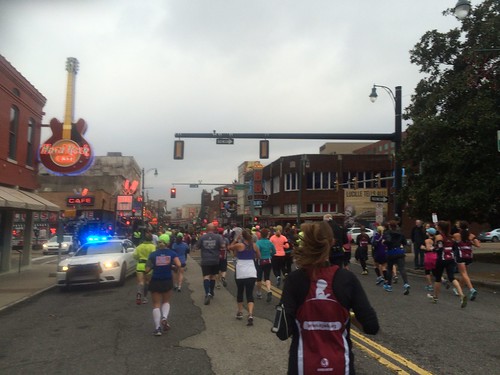 I enjoyed running down Beale Street.  I enjoyed seeing the sites of Memphis.  This is the city where I met fell in love with my husband.  I always love being here.  We ran past the zoo and around Overton Park.  That part got a little tricky because it rained so bad the day before.  And they have seasons here, so there were leaves on the ground.  Wet leaves is a perfect opportunity to slip especially while running a marathon.

The miles passed very quickly for me.  I felt good.  I finished the first 13.1 in 2:14:05 which was a little faster than I anticipated but I didn’t mind because I knew I was going to need the time in the back half.  When I hit mile 13 I was feeling good.  My plan before the race was to turn my timer on the last half of the marathon to stay with a steady pace.  Remember, I didn’t want to fall apart in the back half.  When I reached 13 miles I almost talked myself out of turning it on.  The first half was steady climbs and I knew the second half would have more of the same.  So I cut it on and I’m glad that I did.

My intervals were set to walk 40 seconds and run 2 minutes.  If I needed more time in a walk break, I took it but I would at least try to pick up a run interval about halfway through.  It worked for me.  The climbs and the wind were coming strong but I was having the time of my life.  At mile 19.6 I stopped at a Subway to warm my hands.  The nice lady stood in the bathroom with me for 8 minutes just punching the button for me.  I was so thankful for that.  I debated whether to stop or not.  I knew that if I stopped I would abandon my goal of running a 4:45-4:55 marathon but I knew if I didn’t stop I would have had some problems.  I accepted that fact and stopped.

After leaving the subway, a funny thing happen.  I stuck to my run/walk intervals and I ended up catching up with the people who left me behind when I stopped.  I was so glad to see that I caught up to them.  That meant I was doing something right.  I didn’t really cramp up but that’s because I was taking salt tablets.  My legs were kind of seizing up for being cold but I was able to push through that because of the salt tablets.  I’m glad I finally learned about them.

We ran through the St. Jude campus twice; once at mile 5 and again at mile 24.  It was nice to see the families out there cheering for all the heroes.  It was a touching moment.  That’s the reason we were all out there running!  It was so great!  And just like that, I was done.  I had no idea what my official time was until after I finished.  My watch miles were off and I didn’t even bother to look at the time.  I could kind of feel my hands but I didn’t want to bother with reviewing my watch history. 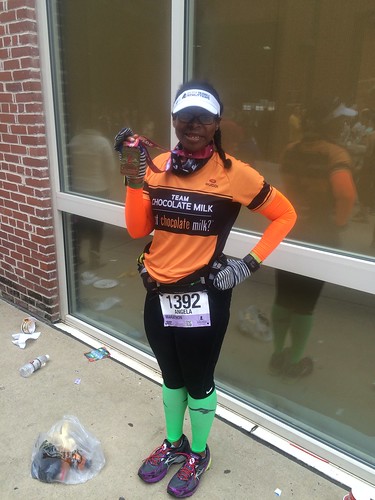 When I finally got a chance to sit down, I found out I finished the marathon in 4:55 which was my goal.  I couldn’t believe it!  I thought for sure that I wouldn’t get that when a stop.  I was overjoyed.  I PRed my marathon!  I’ve been chasing a PR since August. AND I knocked off another state in my quest to run all 50 states!  It was a great day!  After I was done, I waited for Willie to come in but that isn’t my story to tell.  You’ll have to wait for his blog! All i have to say is, I cried like a big baby when I saw him coming on the finish line.  I was a VERY proud wife!  It was definitely a life changing moment! 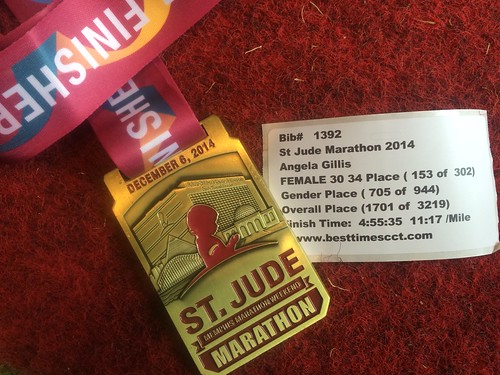 So let’s take a look at my goals:

A goal: To finish the marathon in 4:45 – 4:55. Done!
B goal: To not completely fall off the wagon in the last 10 miles. I tend to die toward the end and I’ve been working on trying to do better at this. Done!
C goal: Just finish and have a good time. Done! 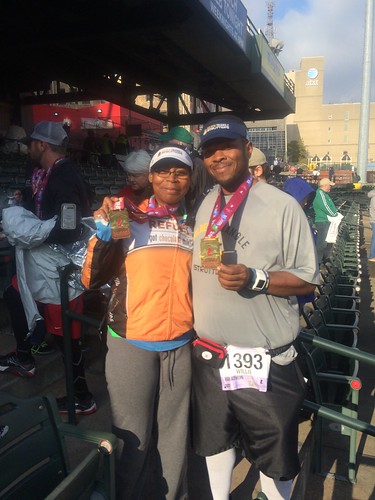 This was just a great race.  It’s a great moment when all your training comes together to give you the result you really wanted.  It doesn’t happen very often, but when it does, it’s the best feeling in the world.  I’ve got my last two races of the year next week.  It’s a marathon double header on Saturday and Sunday.  Finally getting a marathon PR means I can just have a good time next week!