I’ve had rough start to the week and my mind has been playing tricks on me. If you didn’t know, I’ve been taking swimming lessons because I have this crazy idea of becoming a triathlete. I like to run and I LOVE my bike, but I can’t swim very well. Let me be honest, I thought I could swim a little bit but I was wrong.

On Monday I had a swimming lesson and I got frustrated with myself. My mind was already NOT there concentrating on the pool and I had previously ran 3 miles and rushed off to swimming, but I gave up. My instructor was trying his best to get me in the mode and have me work hard and he was pushing me. The problem was I wasn’t pushing myself. I was over it before I even got into the pool. And then when I realized I was struggling with my swimming I was WAY over it and wanted to leave the pool. I tried to cut this lesson short many times but he just wasn’t having it. I stuck with it for a good amount of time, but I just wasn’t having it. I think I cut the lesson short by 10 minutes but I was done. I gave up!

On Tuesday, my training plan called for 7.5 miles. This is the longest I’ve run in the middle of the week ever. I usually do 3-4 miles a couple of times a week and a long run on Saturday. I’m moving into the going further section of the plan now. I was a little apprehensive about it but I’ve been doing a great job of sticking to the plan so I was ready to tackle the run. My mind was still scattered. I was worry about the heat (I started at 5:30 pm I should have waited until 6:00 pm), I left my iPod armband at home so I had to run with my iPod in my Spibelt (which totally annoyed me) and I just felt like I was carrying too much stuff with me. The run was off to a bad start. I wanted to call it quits after 3 miles and almost did until I ripped out this sucker. Oh, my hand held water got so hot I think it started to make me sick. 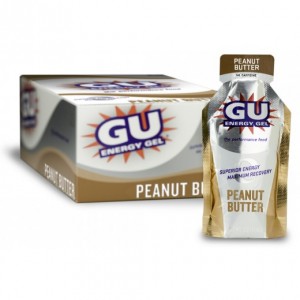 Yes, a GU saved my run! I’m trying to find new ways to refuel while running and I figured I was struggling with the run anyway because sun had ZAPPED me dry. And the moment was like falling in love for the first time. (FYI: I’m currently OBSESSED with peanut butter or any type of nut butter at this point. So having this peanut butter boost was AHMAZING! I know, I’m weird.) At that point, I figured I had just ingested the calories so I should keep going to at least burn it off. What’s another mile, right? 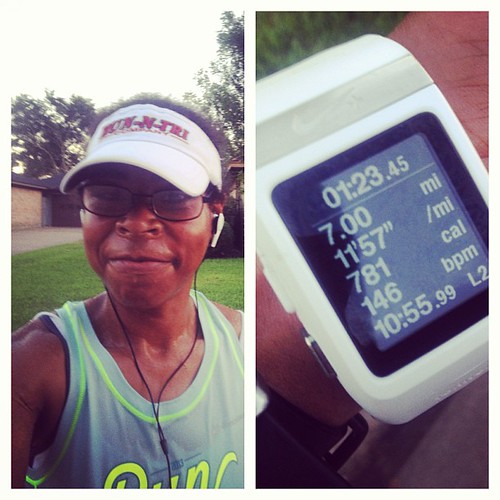 I pushed on and it was rough. The sun had killed me so when the sun started to go down my energy was just at zero. I was running very slow but I didn’t want to give up. I remembered the day before when I wanted to bail on my swimming lesson and I wasn’t going to do that on my run too! Besides, I’m training for a marathon and there will be hard miles in that 26.2 that I will have to push through. It was good mental training! I slowed down the pace and just wanted to make it to the end. I did end up short changing myself half a mile but I figured 7 was close enough!

Moral of the story: Your mind says quit before your body does. I’m sure I could have made this a whole lot easier on my physically if I wasn’t defeating myself mentally. This was a learning experience for me and I think I will grow stronger as an athlete and person after this week. When I run and I’m having a hard time I always tell myself the same thing. “I have overcome so much already. I can do this. I am Angela and I am strong.” Funny, I failed to say this to myself on Tuesday!

I also learned that next time I do my 7.5 miles in the middle of the week, I will start later when the sun goes down a little bit more. The sun is a KILLA! Plus, I need to get more GU!

Saturday I have to run 13.1 and I’m looking forward to running. See, I’m already off to a better start!

What helps you get through a hard run/workout? Do you have a mantra?