On Sunday I ran my 13th half marathon of 2013 in Birmingham, AL at the Magic City Half Marathon and 5K, all apart of Ruben Studdard Celebration Weekend. It was very cold on race morning, something like 28 degrees and it was very windy! I had taken two rest days because I was driving and the other because my hamstring was still bothering me. I’ve never taken this many rest days in my life. 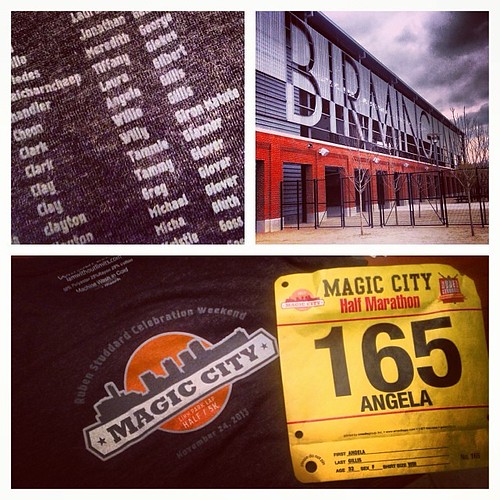 I picked up our packets at Regions Field (the home of the Birmingham Barrons). It was small, but nice. The Trak Shak and the Birmingham Running Club were there. I’m already a member so I didn’t need to join. The shirts for the event are really cute and they put everyone’s name on the shirt who preregistered. I thought that was awesome! 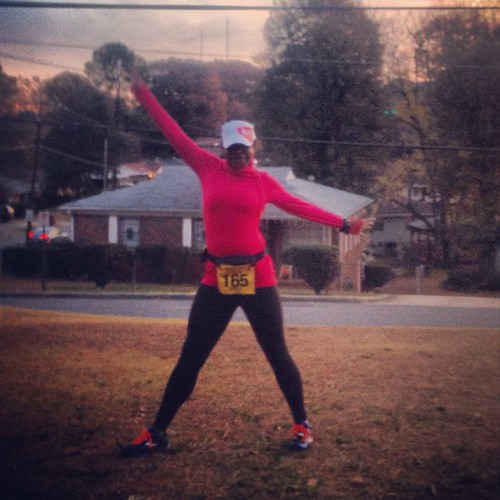 I had gone to Lulumon the day before to find something warm to wear for the race. I walked in the store saw some really great stuff, looked at the price tag and walked right out. The stuff was very cute but I can’t imagine paying that much for stuff I’m going to sweat in but if I felt like I had enough money for that stuff I would. I do wonder if the quality holds up to the price. Does anyone have an Lulumon running gear? I don’t mind paying for something if it’s going to last a long time. Instead, I went to the fanciest Target (the shopping carts even had their own escalator) every and found a similar top they had a Lulumon but they didn’t have my size. I then headed to Walmart and found this really cut top to wear. No green, so pink is the next choice. 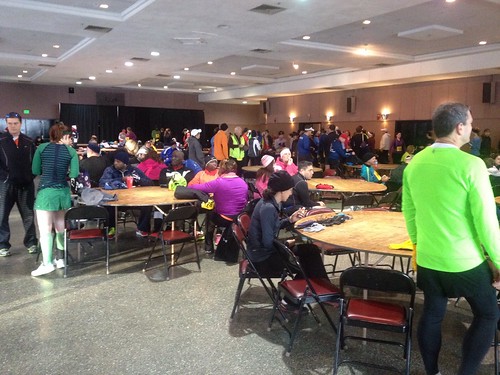 My mom drove me to the race so I stayed in the car as long as I could, but they had a nice area set up in Boutwell Auditorium for all the runners to wait. That was very nice because it was a large open space. There were also heaters outside if you wanted to do that, but I decided indoors would be best. This is where I missed my chance to meet Running Backwards in High Heels, but my mind was foggy and I DIDN’T recognize her until later. She was rocking some cute stuff from Lulumon by the way! She’s in the left side of the picture in the green and blue.  How cute did she look? 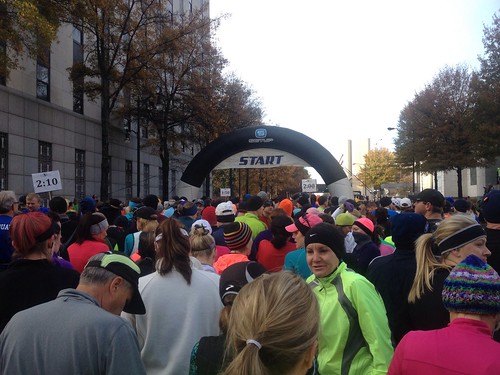 The race was a smaller race which I loved. The start was late which I normally wouldn’t care about but it was soo cold, I just wanted to start running. I wish I cold have taken my pictures but I couldn’t feel my hands. It was so great to run the streets of Birmingham because these are historic streets! The race finally started and we were off in the cold cold air.  No biggie, this was supposed to be a taper week for me so I wasn’t trying to fun this sucker fast.  The miles kept rolling by and we ran a portion of the Civil Rights Trail, Legions Field, Birmingham South College along with some other places.  It was really great. I was going to start the race with the 2:10 pacer but opted for 2:20 pacer instead.  I thought that if I couldn’t stay with the 2.10 pacer I would be disappointed but I knew I the 2:20 pacer was too slow for me.  My recent half marathon efforts haven’t been hard and have been slower, so even though I haven’t been running hard due to training I was afraid I was hitting a back slide. I probably could have started with the 2:10 pacer just to push myself a little harder, but I guess that’s not really the part of taper.  I need to save it for the marathon!

I was using my new Timex watch and footpod and I thought it was off because the mile markers just weren’t meeting up.  It was really bugging me and I thought I had made a mistake by buying this watch.  I soon realized the problem wasn’t with my watch, it was the mile marker set up.  I realized this around mile 9 when 10 immediately appeared a half mile later and then it was really true at mile 11 – 12 when I knew something was off.  According to their mile markers, I was going to run this race in under 2:10 but that’s never happened.

I finished the half marathon in 2:15:45 which is the better than this years Gusher! I was really happy with this time because there were a few hills but it was really windy. I had to stop a couple of times because I couldn’t feel my hands so I may have been able to PR if it wasn’t for this. Thanks to the lovely lady cop at mile 8 who opened up my race belt for shot blocs since I couldn’t feel my hand. Also, I had a nice conversation with a lady at the half way point. She’s trying to run a half marathon in every state this year.  There was no chocolate milk but I had my own when I got home.  But I finished the race and got my race medal which also doubled as a bottle opener, too bad I don’t drink beer! 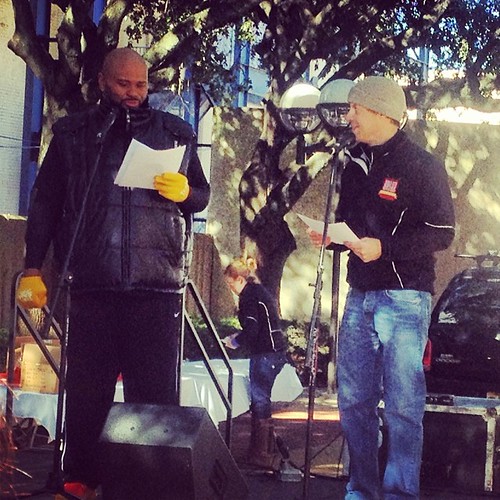 Thanks to Tom at the Magic City Half Marathon who provided me with a free bib for this race!  I was provided the bib but the opinions on this race are all my own.  That being said, I will definitely run this race again next year!  It was well organized, the route was beautiful and I met a lot of nice people!  This was so great and I got to run in this beautiful city!  Next year, I’m going to try to bring some people from home with me to experience the race! I even got a chance to talk to Ruben Studdard for a minute, but I didn’t have my camera so I couldn’t take a picture with him. That’s the bummer of going to races by myself! Sad face.

Thanksgiving is coming up and it’s the Turkey Trot and next week we’ll be heading to Memphis for the marathon!

I’m a bad blogger, I didn’t post anything at all today. I have a good excuse, I was driving in the car all day. It’s Ruben Studdard Celebration weekend which means I’m gearing up for the 3rd Annual Magic City Half Marathon. I am looking forward to the race even though it’s supposed to be really COLD.  I’m trying to decide if I’m actually going to run this race or just have a good time.  To try to PR or not?  I AM supposed to be in taper! I wish I could say I am having a good day but…