I ventured down some serious back roads to Albany, GA to capture state #16 on my marathon quest.  The destination was the Snickers Marathon and Half Marathon.  I decided on this race after finding out I wouldn’t be able to run the Georgia Marathon because I already signed up for another race.  I am so glad I double checked my calendar and decided to run this race.

From my town, Albany is 10 hrs and not really a convient place to fly.  There are no airports within two hours of this place so I thought it would be best to take a road trip.  I was kind of nervous because I would have to go on my own but I was looking forward to hitting the road.  I made plans to stop at the half way point to stay with my best friend Mandie.  That was a blessing that she lives exactly at the half way point. 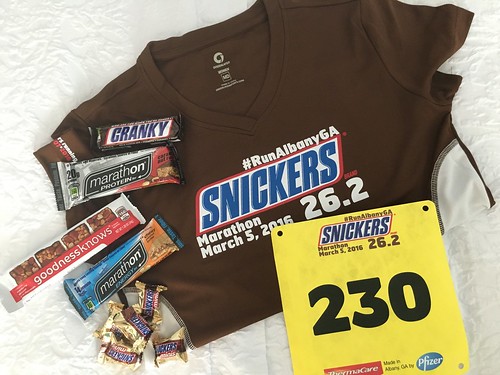 On Friday, I went to the expo which was small and crowded.  Everyone had to pick up their race packets at the expo which was only open for one day and didn’t open until 3pm.  I showed up at 3:25pm and I could barely get through the door because the space was small and so many people were there.  The expo was held at the host hotel which was at the start/finish line.  I’m kind of glad I didn’t stay there though because parking was limited. The swag was pretty good though. 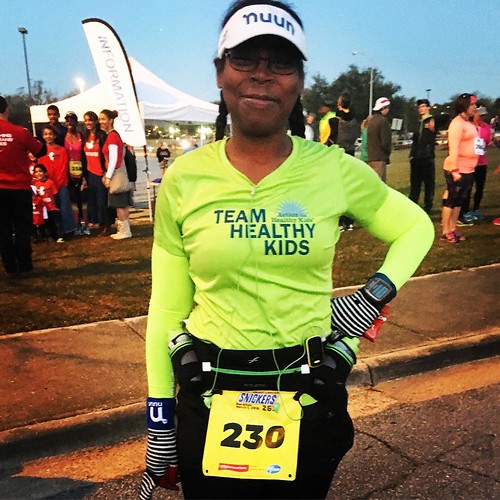 The race was on Saturday and started at 7am.  I stayed about 7 miles from the start and I had no problems getting to the start or parking my car at 6am. It was easy.  This is the type of race situation I like.  It was a cool morning but not cold.  At the start line were the port-o-lets which I thought was weird because people were lining up for the race but had to the bathroom lines running through the start corral.

I lined up with the 5 hour pacer from the start but I didn’t know what my pace would be.  I really just needed to finish this race.  The race started on time and within the first tenth of mile of the race, the marathoners and half marathoners split from each other.  There was no turning back at this point.  I was having some issues.  I hadn’t ran the entire week and didn’t get a chance for a shake out run.  I was stiff and I had some shin pain which I hadn’t had since December.  It was tight and I got worried.  From the start, I lost the 5 hour pacer because I just couldn’t run.  I was frustrated because I didn’t have any shin pain for so long but around mile 8 after it loosened a bit, I realized it was from driving in the car all that way.

Around mile 5, I caught up with the 5 hour pacer and vowed to stay just a minute or two ahead of him.  I was comfortable with that pace.  The humidity was low which I found very nice and I settled into a good pace.  It was conversational and I was talking to the others around me.  At mile 13 the pacer blew past me running solo because he was “behind” but he really wasn’t.  At that point, I stopped to use a restroom and do my mental health check.  Everything was good so I kept pushing forward.  I was looking forward to mile 16 for my Honey Stinger Strawberry Waffle.  Why mile 16?  Because that’s usually the point when my morale is the lowest, but that really didn’t happen this time. 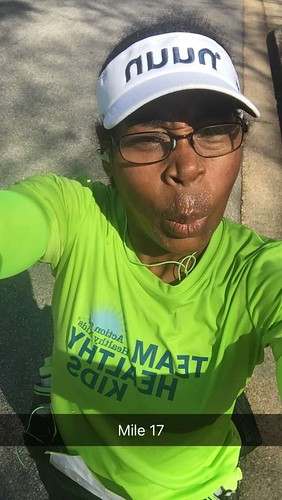 I rolled pretty good.  I crossed the mile 19 point at 3:43 on the clock and I really felt like I was doing great especially with all the stops and problems I was having earlier in the race. Around mile 20, things started to slow down a bit as the weather started to heat up.  I felt like dead weight at some points but I was still running.  At mile 23, I had side stitch so bad it stopped me in my tracks.  I hydrate with Nuun during races but sometimes it’s hard to mix that stuff up on course.  I may need to switch to running with one big bottle instead of small bottles so I can make sure I’m getting my proper electrolytes.  I know this was the problem with my side stitch because it’s been happening a lot lately.

At mile 24, I was able to run again which I was thankful for.  My calf started to tighten at the beginning of the race, probably because I was having problems with my right shin that affected my gait.  That calf was on my mind the entire race and at mile 23-24 it was screaming at me but I knew I was going to finish, even if I had to walk.  I didn’t want to walk because I ran a really strong marathon, but it was more important for me to finish.  I was really aiming for a 5:08 finish and it was within reach but walking mile 23 kind of hurt me a bit. 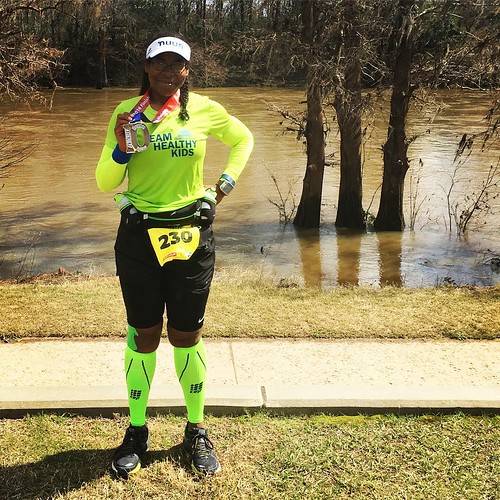 At mile 25 I spotted a guy who was struggling so I kind of hung back with him to encourage him.  I thought it was more important to help him get to the finish line than to burn off.  Those little things actually matter to people and I know how it is to be in the point.  I finished the race with a time of 5:16:16 which was really great.  I am super proud of my performance at this race.

The course was mostly flat.  There were some hills in places one would not want hills, like at mile 24, but it wasn’t anything rough.  I think I tend to notice the elevation changes a bit more when it’s a flat course but there was nothing major happening here.  I think this is a great course for someone who is trying to BQ (Boston Qualify) but I’m not one of those people. I prefer hilly courses because it helps build momentum and I don’t think hilly courses are as hard on the legs.  That’s just me.

There were snickers/marathon bars at the aid stations which was kind of cool.  The volunteers were amazing.  The town is so cute and scenic and the people really embraced the marathon.  It was great.  This race exceeded my expectations. 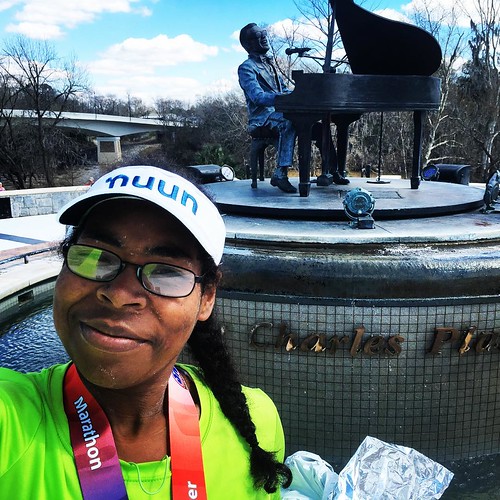 At the end of the race, I sat by the Ray Charles memorial which was pretty neat.  It played music!  This was a nice surprise! This was a great race and I’m glad I stumpled upon it. If you’re looking for a good course and nice people, this is the race for you! 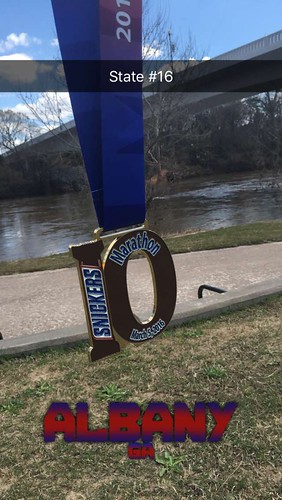 The medal wasn’t that much to talk about, but it was still nice for the 10th year of the race. If a race has been going on for 10 years, they have to be doing something right.

Hello all! I think I am ready to make my return to blogging. I have been going through a lot of things lately but I think I need to just come back. There will never be a right time and my mind will never really be free of stress. These are probably the moments that I need to be blogging. Yesterday, I hit the road for Georgia. Thank goodness for having friends that live at the half way point of life. I was able to drive halfway yesterday and finish it up today. I will be making the full drive…