I’m late on my race recaps, but this is what Tuesday is for.  On November 7, 2015 I ran the Pleasure Island Bridge Half Marathon which will always be remembered at the Mosquito and Monsoon Festival 2015.  The minute we pulled into the parking lot the mosquitoes swarmed the car and I knew it was over at that point.  We even bug sprayed before we left the house because the bugs are always bad.  This year it was worse. 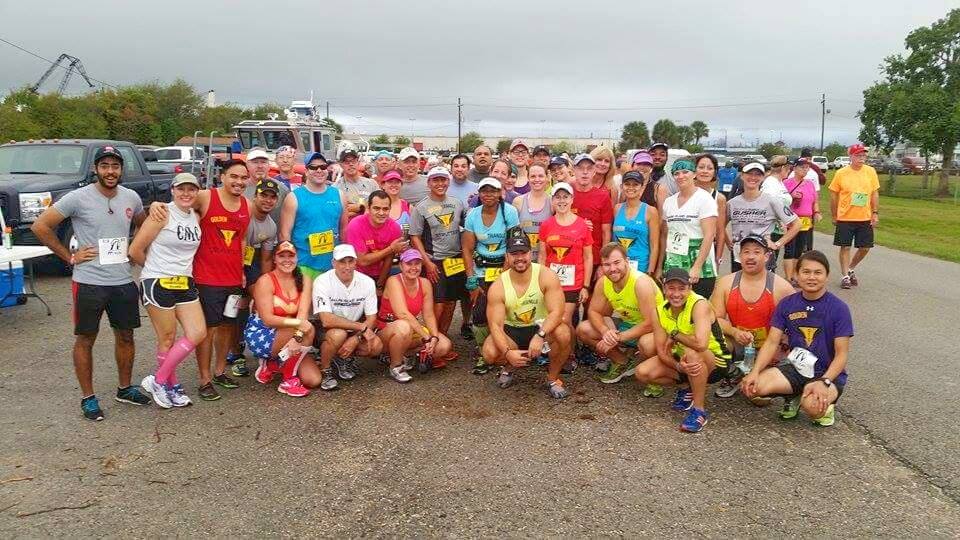 It was so bad that we didn’t even want to take pictures before the race.  This is the only picture we got beforehand.  Thanks to Jeremy for the picture with our running group!

This race is a hometown race and it’s one that I’ve enjoyed every year.  This race was my second half marathon EVER so it holds a special place in my heart.  And it’s one of the prettiest races I’ve run; it’s such a same I couldn’t enjoy the views this year.  I knew at the start of the race I wasn’t goingt to PR and the only thing I was worried about was getting done in enough time to rest before having to drive to Florida.  Yes, I had the smart idea of running a full marathon the next day just a few states away.

The weather was horrible.  On the drive in, it was raining.  It stopped raining so it got super muggy and humid and then the sky opened up into a flash flood.  All that rain didn’t stop the bugs though.  To be honest, the only thing I remember about this race is the rain.  I wanted it to stop.  I wanted them to pull people from the course. 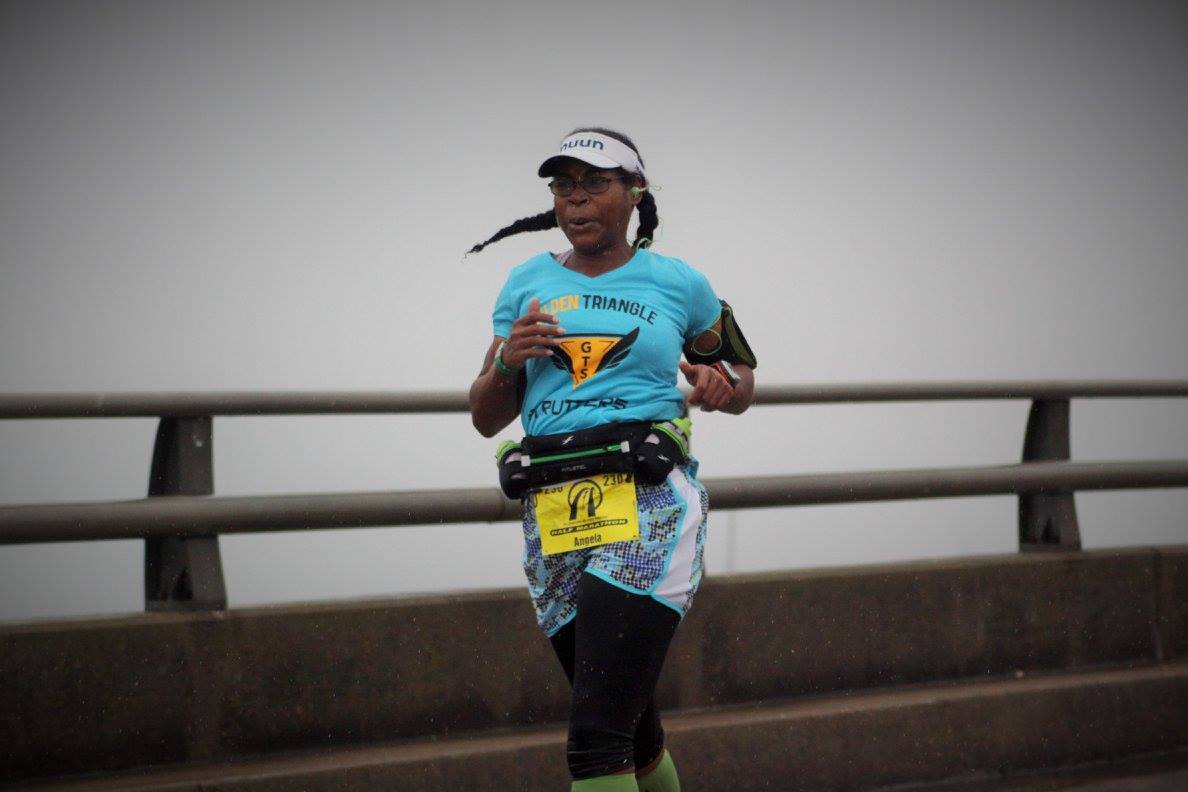 I decided not to run the actual bridge because I was wearing old shoes. The bridge was slick and my shoe grip was completely worn.  I didn’t want my newer shoes to be sopping wet for my full marathon the next day.  I almost debated not wearing my old shoes, but I’m glad I did.  I saw Willie on the bridge and I knew he wasn’t going to make the half marathon.  He decided mid-race to run the 10K.  It was best for him. The bridge is really on 2.5 miles of the race, I think.  Don’t quote me on that.

I kept going though.  We came back near to the start (where the 10K race would finish) and I was hoping they were going to pull people from the course because the rain was horrible.  No luck!  Yes, I could have turned in and called it day but that’s not in my nature.  Now if someone was going to pull me from the course I would have gone with no complaints.  After the 10k/Half split it was just us warriors on course.  We were dodging puddles (which were nothing at that point), swatting flies and all searching for the motivation to keep going.

I needed to eat because I didn’t fuel up properly for the race but by the time I got to an aid station with bananas, the fruit was more than soggy.  The bananas were water logged.  The one great thing about this race is the aid stations are fully stocked with more than just gels and blocks. I was dependent on that this time but soggy bananas are no good for me.  Gels it was for me until the end of the race. 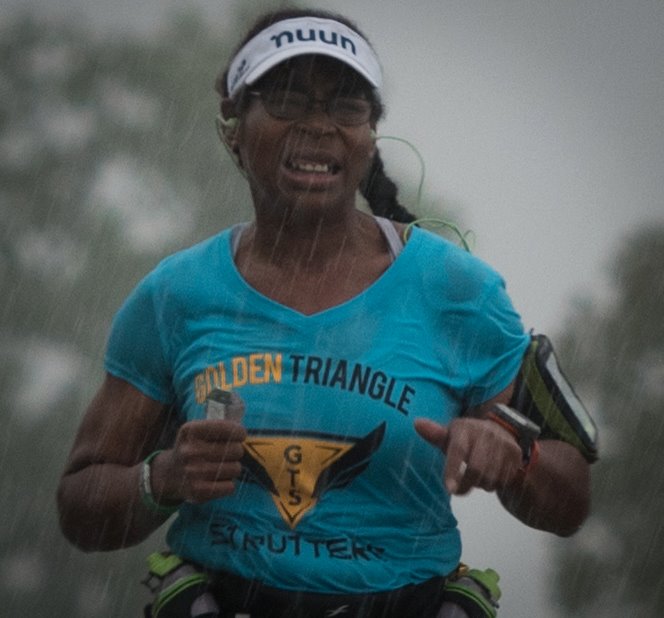 The miles ticked by pretty fast.  Maybe it’s because I’ve run this course so much or maybe I was just concentrating on the rain. I ended up running with a lovely lady who was running her first half marathon.  We chatted.  I motivated.  We laughed.  I somehow became the Rain Happy runner out there.  Cheering everyone on despite the torrential downpour we were running through. I wasn’t having a horrible time.  It was kind of fun at times.

The more it rained, the more the streets started to fill with water.  At some points it was ankle deep and my shoes were completely water logged to the point where there was no support left in them.  I was constantly stopping to make the laces tighter.  I was starting to feel a twinge of pain in my foot from the lack of support in the shoe. 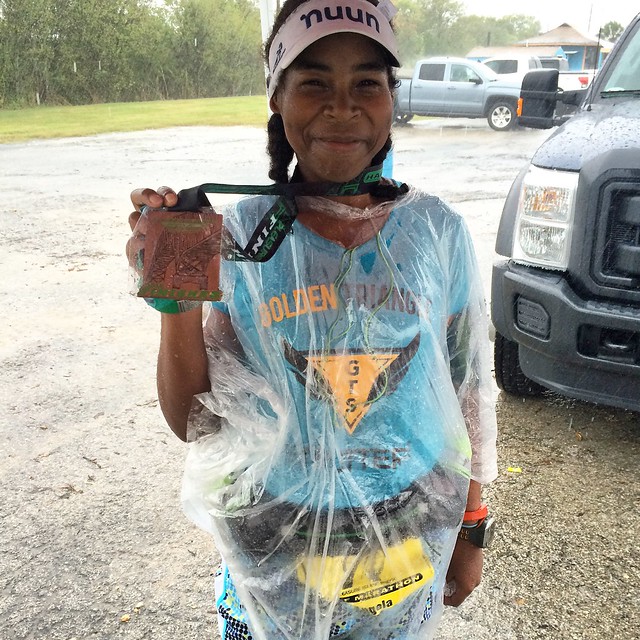 All in all, I finished the race in a rainy fashion in 2:32.  I wanted to do better than that but the conditions just weren’t going to let that happen.  I had a great time though even though I couldn’t get a banana.  There was no time to hang around after the race because it was raining and the bugs were in full force…still.  And there really wasn’t food to eat unless you wanted buffalo wings which isn’t my thing.  Hopefully, I’ll be able to run the race next year because it will be the 5th year and I’ve run it all those years, but I’m looking at the calendar now and it just might interfere with the NYC Marathon.

Most photos are compliments of The Pleasure Island Half Marathon/10k/2-Miler Facebook.

It’s my favorite race of the year!  I love the Pleasure Island Bridge Half Marathon for many reasons but most importantly, it’s just a great race with great people.  I run all over the country but it’s nice to run the local races.  I’m so blessed that my community has two great local long run events. This is my 3rd year running the bridge and I wouldn’t miss it for anything.  The race is scenic and it’s always great to run a bridge, right? I didn’t have a goal this year because last year I was really sluggish at this…