The Pensacola Marathon was on November 8, 2015.  I decided to run this race on a whim because I had to cancel my trip to Las Vegas because I couldn’t miss work due to my mom’s impending surgery.  I needed to meet my state goal and it was completely last minute.  That is the reason I ended up running a half marathon the day before this race.

I got in the car and drove to my best friend Mandie’s house so that we could venture to Florida together.  The drive wasn’t that long.  It was something like an hour and half from Mississippi and I was 5 and half hours from Mississippi.  Thank goodness for best friends who don’t mind playing chaffuer for their crazy running friend.  I couldn’t have made this happen without her. 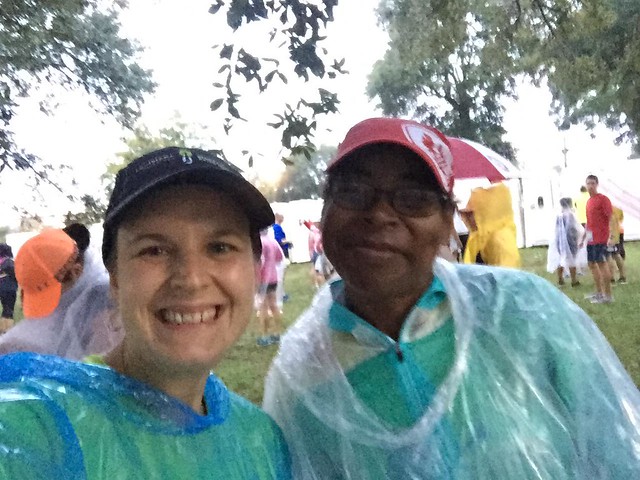 My friend Dacia was kind enough to pick up my race packet for me because there was no way I was going to make packet pick up.  More races should offer race day packet pick up because it’s great for out of town runners.  Anyway, Dacia was so kind to me.  She picked up my packet and she picked me up for race morning.  I was all types of nervous for this race.  The weather was rainy.  I was nervous as heck and making the cut off time.  I wasn’t much company in the beginning. I haven’t been that nervous in a long time.

The race started early, 6:30 am so it was an early morning.  I woke up ready to go but I still had something in the back of my mind.  It wasn’t raining at the start of the race but it was very windy.  The race started and I was kind of struggling.  The humidity snuck up on me and the wind was in my face.  The only thing I could do was make the best of a bad situation.  I just kept going but I was already walking.  I didn’t bring my iPod with me because I didn’t know if I could take a second day of soaking.  That was a mistake! The miles weren’t rolling off fast enough.

At mile 6, I really wanted to quit but I took the turn off to the marathon.  I called Willie and told him I needed to call this one.  He insisted that I  needed the state to continue but I really didn’t care about it.  I didn’t think I would make it through but you know what?  I kept moving.  By the time I made it to mile 9 I had settled into a groove and the rain started to pick up again.  I think this would have gone a lot better if I would have had some music.  I think I perked up because I was running with people again.

At this time I also started to questions, why did I think Florida was flat?  This race was pretty hilly.  I mean steady growing inclines and I wasn’t expecting that.  Lots and lots of hills were in store for the back half of this marathon but I kept going. I did have to stop a few times.  I couldn’t find a clean port-a-potty to use that I could actually step inside.  I eventually had to let that go.  And then all the wetness was causing my feet to rub but there was no vaseline on course.  This is one time I wish I could have carried my own or ran past a Walgreens or something.  (When we finally did run past one, I was too close to the end to stop.) 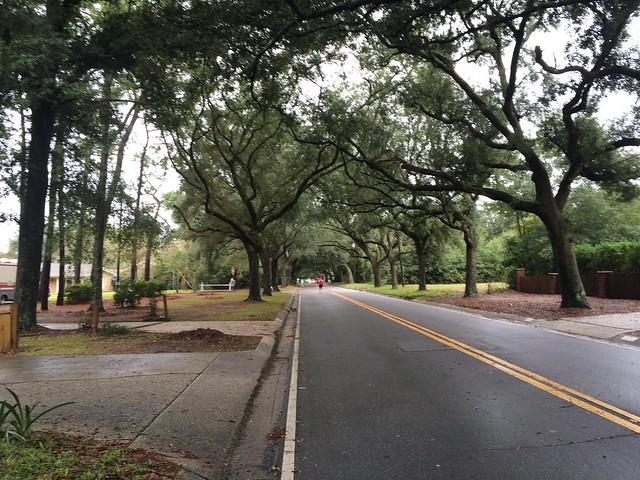 The rain stopped for a little bit and it was so serene for a few miles.  I had to stop to take a picture. The great thing about this race was Nuun on course.  That doesn’t happen in many races so it made me happy.  That meant I didn’t need to carry my own tabs.  That is always a big perk for me. 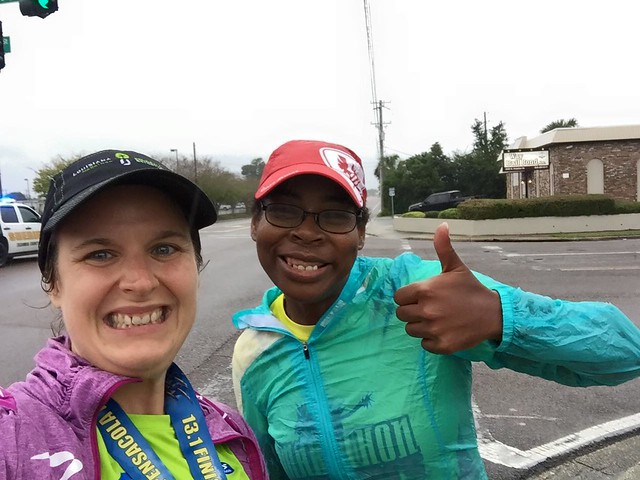 At mile 20ish I saw Dacia and Erick.  I was so happy to see friendly faces.  She had finished her half marathon and came back out to see me on course.  I will be forever grateful for that. At mile 21, I saw my friend Margarita who gave me the best bagel in the world.  I really start to get hungry in the back half of these things. Around mile 23 I saw Mandie patrolling the streets.  This was totally an accident but something I really needed.   Seeing all these smiling faces was the greatest thing in the world. 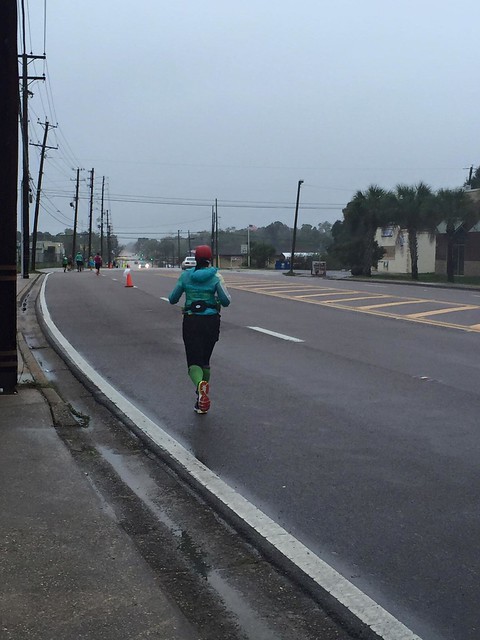 The last 2 miles I had a side stitch that wouldn’t quit which I am learning has everything to do with dehydration.  I need to be better about monitoring my intake of fluids during a race.  The thing is this gets harder when the weather is cooler because I dont’ feel like that I need it.  But I was taking water at every water stop, but I think I might just need more water than the little cups they were handing out. 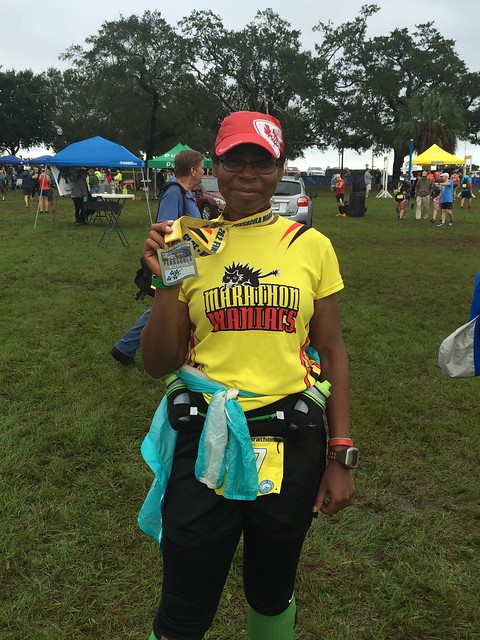 I finished the race in 5:44 and I was glad to be done.  The race was really nice.  There wasn’t a lot of crowd support in some parts but the volunteers were very nice.  We spent a lot of time running through neighborhoods and on some lonely roads which really didn’t bother me at all.  It would have been better with music. 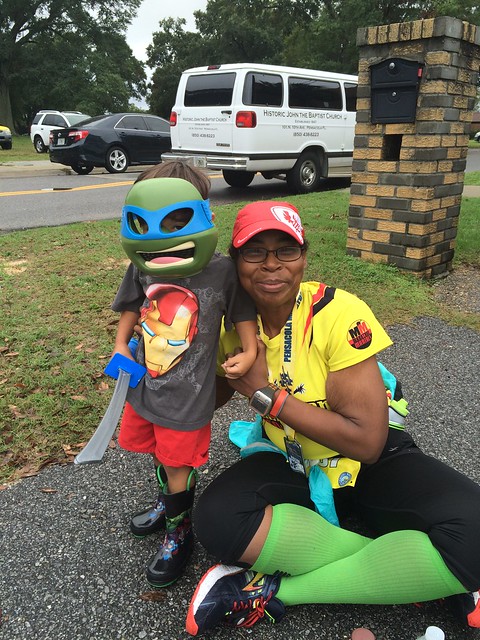 It literally took a lot of friends and ninja turtle to get me across that finish line and I’m glad that I did.  It was a great learning experience.  I tell you, I push past new limits every time I run a marathon.  It’s never the same.  This challenges me.  It pushes me.  It keeps me motivated.  And just like that state #14 was captured and marathon/ultra #29 complete.