I may not have talked about it a lot lately, but I still love oatmeal.  There was a mild obsession with it a while back that has become a full-blown obsession now. I ate oatmeal every day until I got preggers and then for some reason it has to leave my life.  I’m happy to report it’s back in my life…a lot quicker than eggs.

I’ve been an oatmeal snob.  I can’t eat other people’s oatmeal unless I have the same ingredients as my special concoction, but this morning I tried something new. 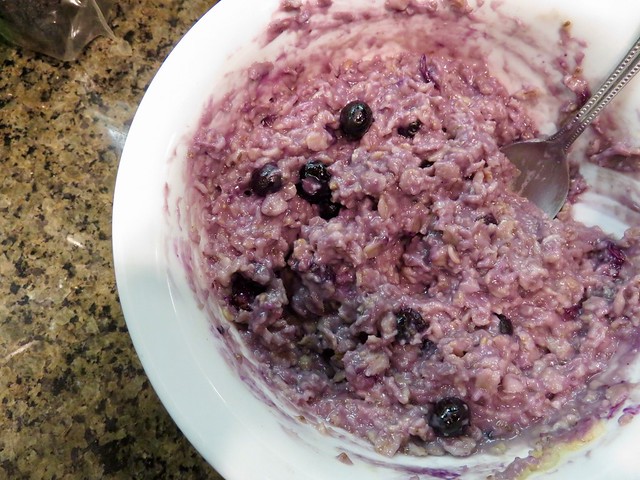 Introducing for the first time: peanut butter and “jelly” oatmeal.

There was great discussion this morning about if I should put actually jelly in it or if blueberries would do the trick.  I’m a huge fan of the PB&J sandwich but I’m not too sure if I want the actual jelly in my oatmeal.  There was something about it that just didn’t seem right.  I went with the blueberries and it was fantastic.

I have a basic way of making my old-fashioned oats. I usually heat water in the microwave for 3 minutes, then dump my oatmeal, sliced bananas, chia seeds and cinnamon in the bowl with the water. I mix it around and let it sit COVERED while I do my other business around the house. When I’m ready to eat, I put the oatmeal in the microwave again for 2-3 minutes until it starts to rise…and then it’s done. Then I add my fruit and yogurt and start the oatmeal party.

Today I nixed the oatmeal, warmed up a tablespoon of peanut butter and half a cup of frozen blueberries. It was probably the most delicious mixture in the world…for me at least. Would this be something you would try?

What flavor combos would you want in your oatmeal?

It’s a marathon week so I don’t do weights.  I didn’t go to my usual group Power class this morning.  Instead, I stayed in and did some strength training with the ladies of Tone It Up.  I seriously love these workouts.  You can get them for free on their youtube or buy a DVD like I did!  I started the program at the beginning of the summer and within weeks I noticed a difference.  These workouts are the bomb for toning up and looking fabulous. While I was working out, I was thinking about food.  Is that a bad thing?…

END_OF_DOCUMENT_TOKEN_TO_BE_REPLACED

I love peanut butter. I can think of all kinds of combos that I love that involve peanut butter. My problem with peanut butter or any nut butter is the fat. Yes, it’s a good fat and beneficial to my health, but it’s really not something I’m comfortable eating everyday. My biggest craving in life is nut butter because I do love certain combinations. For those day I want the peanut butter without all the fat, I found some alternatives to help meet my cravings and I thought I would share with you my love of the nut butter! Here…

END_OF_DOCUMENT_TOKEN_TO_BE_REPLACED

Willie’s birthday was on Monday.  He’s growing into an old  wiser man!  He’s so low key that he didn’t want to do anything which made it hard for me.  I always want to make moments in his life super special but he’s happy with toned down and low key.  I guess it’s the time we spend together that makes it special, right? When I asked him what he wanted for his birthday, he said nothing. I wasn’t going to let that fly so I went searching for the perfect card and perfect present. The card search was a lot harder…