The Gusher Marathon, Half marathon and 5k is the big race in my hometown and it’s a great race. I take the race for granted because it’s local and it’s not the big travel tada. But that doesn’t take away from the greatness of this race.

I was very excited because my mom came out to do the 5k. Plus Missy, Tyson and Emmy came out to run too. I hate I didn’t get to see them start or finish though.

The Gusher is a double loop course.  It killed me mentally last year but it didn’t this year.  The double loop doesn’t bother me now.  Sometimes it’s a necessary evil.  At least you know what’s coming up and there aren’t any surprises the second time around. 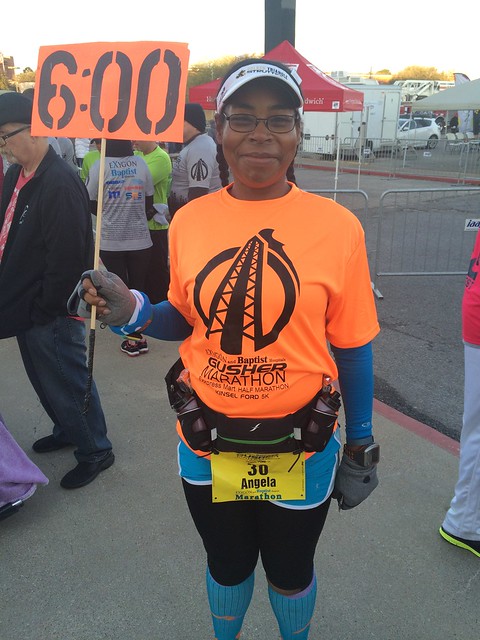 I ran the marathon as the 6hr pacer. Pacing the marathon was a very rewarding experience. My job was to be the last person to cross the finish line. I set in knowing it was going to be a long day. No one wants to start with the 6hr pacer because it was a 6 hr time limit. I ran the first 8 miles with some half marathoners who were pushing for a 3 hr half. They kept me laughing and I kept encouraging them.  The hardest thing about pacing is having to leave people behind.  It’s the worst feeling ever but it’s always nice to know those people appreciated me along the way.

Around mile 12 I was running by myself and waiting to see if I was going to scoop up any marathoners.  I was really proud to come in to the half way point at 2:59:38 so I was on pace.  I waited for the call to see if any other marathoners were behind me, but I suspected none of them were so I started to pick up my pace just a little bit.

I ran two minutes and walked one minute to keep me on track.  I also had the privilege of having the bicycle escort which was pretty cool because I was never really alone.  I had someone to talk to when it got a bit hard.  At mile 17, I saw some people in distance so I picked up my pace.  I was already ahead of pace so I was very quick to tell them not to be scared, “I’m 12 minutes a head of pace.”  Unfortunately, I had to lose someone to a medical condition but after she was picked up I carried on the course.  I started getting people pretty quickly but they were all happy to know they were ahead of pace.  I settled in with the back of the pack and we pushed through.  We talked about them running their first marathon.  I shared my first marathon stories with them.  We walked, we ran, we walked again.  I bribed them with donuts only to not have donuts there when we stopped.  But the thing that really kept these people moving forward was knowing they were ahead of pace.  That was the thing.  That 6 minutes, 4 minutes, 3 minutes made a big difference to them because they were fighting for every minute.

It was truly a humbling experience running with these people because they were fighting for it.  They wanted it so bad.  I’m not saying that everyone doesn’t want it because we all do.  But very few people are faced with a time cut off and having to make it.  It’s a scary feeling knowing that if something doesn’t go right you could get pulled from the course.  But those are the moments that they pulled from within to find the strength to keep going.  It was amazing!

I finished with one young lady at the end.  We counted down the miles together.  At mile 24 we turned onto the Lamar campus and I told her she only had 2 miles left and she said that was nothing.  In the moment I turned her to her and told her I couldn’t promise I wasn’t going to cry when she crossed the finish line.  I felt her pain, joy, happiness and strength all in that moment.  As we approached the mile 26 marker, I told her to clear her mind and really enjoy the moment.  I backed off from her as we turned we corner so that she could have her moment of crossing the finish line by herself.  She whispered “thank you” to me as she kicked in it and my heart was overwhelmed.

I wanted so badly to get everyone in before 6 hrs. I started the race with that in mind and I wanted to see it through.  I wanted them to know they could do it.  I was the last person to cross the finish line and the clock read 5:57:58 when I looked up.  So when I crossed the line, I tried to hold back the tears but it just didn’t happen.  I was proud of all 5 of those people who pushed through.  I was proud that whatever I did made a difference in getting them to that finish line.  And I was proud that I could do it in under 6 hrs.

I have to give respect to those back of the packers because they are warriors.  They keep pushing and fighting and don’t really get the big finishes.  Most people have cleared away from the finish line and the aid stations are left bare bones (sometimes without people there) but they keep going.  It was definitely a moment that changed me and one I’ll never forget. 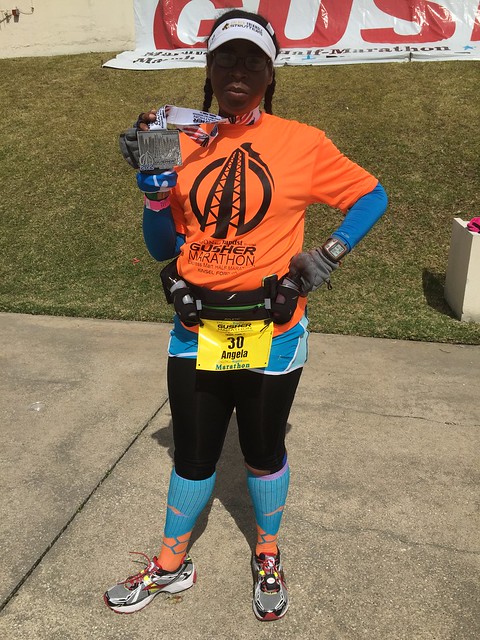 It doesn’t look like I was happy but I was. I was just tired. I promise. 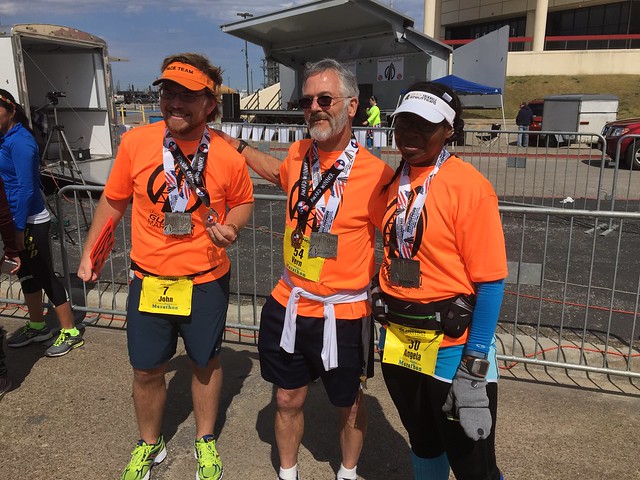 I enjoyed it and I plan on doing it again.  A few days away from the experience, the pain has worn off but the spirit is still there.  It was the best experience of my life.  Thank you to Amie and Richard for letting me pace!  And BIG thanks to everyone that helped make The Gusher another great race.