I get a LOT of e-mails wanting to know what I’m eating. When I have more time, I cook REALLY good meals but I haven’t had much time so I’ve been eating really basic meals. I haven’t been cooking too much lately. If it’s been too late to cook anything we’ve picked up salads from Subway or just settled for whatever was in the fridge. I’ve really been on the search for something that is quick and easy to make and will last a couple of days. A couple of weeks ago I purchased some turkey sausage but never got around to cooking it; it ended up the freezer. Finally this week, I had a minute to get something together and created a really tasty dish. It may not look like much on the plate, but it was SO GOOD! 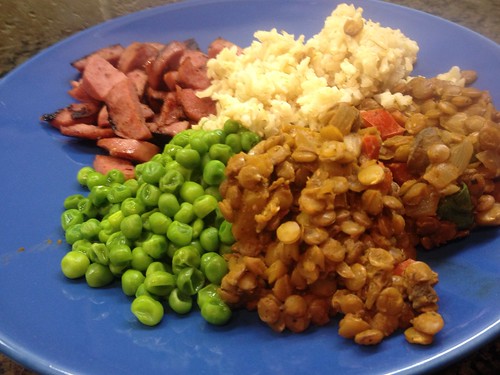 When I was overweight I had my fair share of sausage and rice. I probably would eat half a sausage ring myself plus a lot of rice and beans. I’ve never wanted to give up my love for sausage and rice because it was a cheap meal. When I was in college this was always a go-to meal because we could make our dollar stretch so much further. Now, I’ve kind of elevated the dish to meat our nutritional and lifestyle needs.

Instead of using baked beans in the can loaded with fat and sugar, I now make lentils. Lentils are a legume and considered a superfood. Lentils are also very cheap. (I get there are more components to the dish than just the lentils but this is what I’m choosing to focus on for this post. Sausage and rice is pretty basic and it’s easy to cook…and so are the lentils.)

I like to experiment with my lentils so this week I cooked them with low low sodium chicken stock and tomato sauce. Willie is a picky veggie eater so I also diced some up so he wouldn’t know what he was eating. Until he reads this post, he won’t know there were brussels sprouts in there. I sautéed the veggies: onion, red bell peppers, brussels, garlic with cumin, cinnamon, black pepper, oregano and pinch of salt. Then I added the lentils and covered it the chicken stock/tomato sauce mixture and let it simmer until it was done. At the last minute, I added peaches and dijon mustard just because I thought it would work…and it did! At the end, I put in some kale and swiss chard! This turned out soo good.

As you can tell, I like to experiment with foods to make them my own. I will post the recipe if people are interested in the dish. These were probably the best lentils I’ve ever made!

Do you eat superfoods? Which superfoods are your favorites? Besides lentils I love quinoa, kale, collard greens, sweet potatoes, broccoli and brussels sprouts. I also love blueberries!