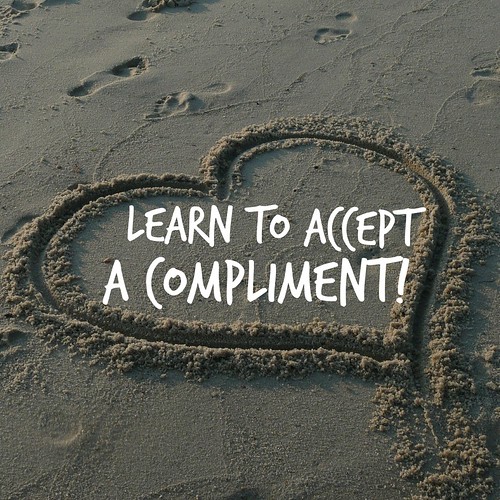 When someone issues me a compliment I know I usually turn it into something negative. The usual response is something like, “Thanks but man I’m…struggling/hurting/tired/etc.”   I don’t know how to accept it.  I’m not one for attention either so that is probably half the problem.

Willie, on the other hand, says he has a hard time accepting compliments because he never really received compliments growing up. He’s just wasn’t use to hearing nice things about himself.

Everyone has their reasons, but it shouldn’t be that hard to accept nice things being said to us by others. It’s definitely something I am working toward handling better.  I don’t have a problem telling people nice things because I like people to know I see their progress or the great things they are doing. It’s a good feeling to share that with others so it should be a great feeling to get it back in return.

Like I mentioned before, I don’t like attention which sounds funny because I have this blog.  But I guess I don’t want to come across and conceited or arrogant when I accept a compliment.  I don’t think I do anything out of the ordinary and I just work hard for the things that I want.  Accepting a compliment doesn’t mean that I’m full of myself though but I don’t want to be recognized for anything out of the ordinary.  It makes me feel uncomfortable.

Because it makes me uncomfortable, I usually end up passing a compliment back to the person who is complimenting me to deflect from the attention.

Here are some ways I’m going to do better at accepting compliments:

1. I will really listen when people tell me something nice.  I will take it in and appreciate it for what it is.  If they are saying it to me, then they must be noticing something that I might be missing.

2. I will remember no response is needed besides “thank you.” That may be a problem why I have a hard time accepting compliments because I don’t know what to say in return.  Just saying those two words is all the response that is needed.

3. I should do a better job and recognizing my self worth.  Maybe I don’t think I’m worthy of getting compliments, therefore, I don’t know how to accept them.  Feeling like I’m worthy of the praise will go a long way and that doesn’t make me conceited.

4. I will know that it’s okay to pat myself on the back for a job well done.  If I did something great, even if it was just for myself, that doesn’t mean it’s less significant.  Knowing I did something well isn’t a crime and doesn’t have to be hidden in the darkest corner of my being.

Happiness is relative. What makes me happy will definitely may not make you happy. What makes me happy at a certain period in time will change from day to day. If I’m longing to be outside on a beautiful and I finally get there that will definitely make me happy, but that may not make me happy everyday. It’s all about a circumstance, a moment, a smile, a joke, a song…etc. Happiness comes with it’s ebbs and flows. The one thing I do know is EVERYONE DESERVES TO BE HAPPY! What is happy? Here is the official definition of happy.…