On Saturday, I ran my 5th marathon of the year!  On Friday, I didn’t want to run the marathon.  Saturday morning, I was a feeling a little better around running the marathon, but I still didn’t want to do it.  To be honest, I didn’t want to run another marathon until China. A half marathon would be fine, but no fulls.  Physically I’m capable of doing it, but there is a huge mental toll the marathon puts on you and I’ve just been too busy which left me mentally tired.  I sucked it up though because the race directors were really nice. And I’m definitely one of those, once I’m registered I’m in people! 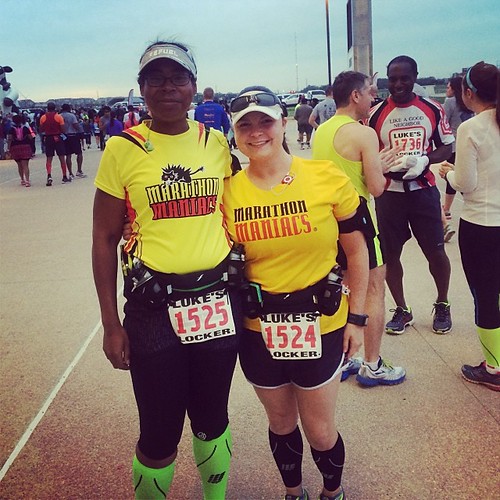 Race morning the weather was pretty good. There was a zero percent chance of rain, cloudy and the high was in the low 50s. Nothing really to complain about. The race started and ended at the newly constructed Irving Convention Center. The bathrooms were clean it was easy to get to. We were even running a tiny bit late but still managed to use the bathroom and get to the start line on time.

The first 4 miles of the race sucked. I was questioning why I ran period much less marathons. I didn’t even think we would make it the half cut off. It was BRUTAL. The whole idea was to make it in before 6:22 which was the Little Rock Marathon time. This was supposed to be an easy week for me. I was just running to be running. It was supposed to be fun. Before it was fun, it got real. That’s when I decided that I’m taking a mental break from the marathon. After China, no more marathons until October!

Things took a turn for the better when we made it off of the main street and hit the trail. It was beautiful. We turned some music on and we worked that interval timer. Thirty second walk breaks don’t last very long, but two minutes of running seemed to go on forever. We were making it work. We saw the other maniacs on the course and it was like we were royalty. Cheers and hand slaps the ENTIRE marathon! It was a good time.

In this race there were two major out and backs. The first one wasn’t so bad. The second one was a little painful, but I’ll get to that later. The first out and back pretty much followed the half marathon course and since it was on a trail, it was a lot of people crammed onto one path. Once the half marathoners hit the course, it got crowded very quickly. I think they said 1800 people ran the race which was a 5k/10k/Half Marathon/Marathon with 290 people running the marathon. Once we set into our rhythm things were good. 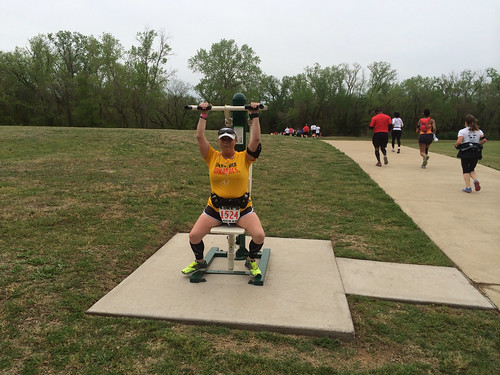 The aid stations and volunteers at this race were amazing. I was a little bummed there were no energy gels on the course. There was one aid station with bananas and oranges in the last few miles and we attacked it so hard. We legit wasted 5 minutes just eating and talking to the volunteers. Also, there were little exercise stations on the trail. We had to stop and waste some time with those!

The second out and back was on the trail for a little bit but hit a residential neighborhood for something like 10-11 miles. Little did we know that was going to be the last port-o-potty stop! My need to use the potty set in way after my friends need but when we finally made it the turn around at mile 16 things were getting serious. There was no where to go. Thankfully, we passed by a hockey area and they were having a game so we stopped in to use the bathroom there. Otherwise, this race would have been disastrous. 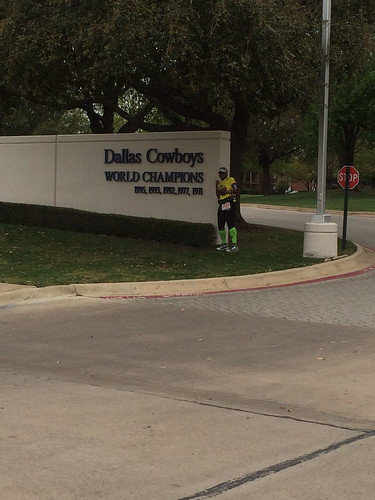 On a good note, after we left the area I realized we were running on Cowboy Pkwy. So I had to stop and take a picture! Right outside the training facilities for you Dallas Cowboys fans. That’s what I love about running these races, it’s a great way to see the city.

We were doing good and we were going to come in long before our goal before that stop. At that point, we just wanted to finish. It was windy. But I’m proud to say I made it through miles 16 without having any problems and my friend made it through mile 18 without any hiccups. Those are huge victories in our book! Those are our breaking points but there was no breaking on Saturday. 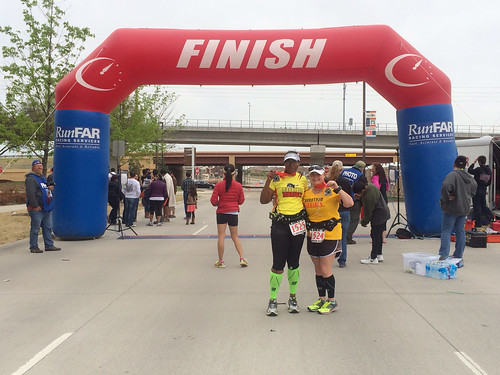 We crossed the finish line at 6:04:20 and no one was there. LOL! There were people there, the people who motivated and tried to help along the way. Sadly, I think some people we tried to help didn’t finish the marathon. We passed two guys at mile 8 that were really having a tough go at it. I wonder if they turned off for the half marathon course because we didn’t see them in the end. 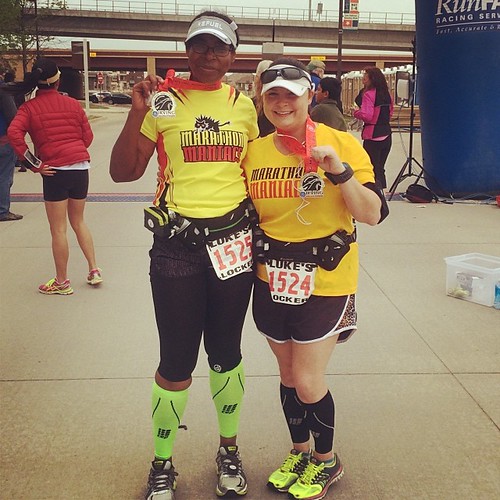 Most importantly, we crossed the finish line and shed no tears! It started out pretty rough but it came together in the end. Another training run for China in the books!

This was a great race. I think the race directors for everything! They really took the time to think about the runners, except for that whole restroom situation on the out and back! The course was pretty. The volunteers were amazing. This would be a good race for a first time marathoner too. Be careful though, you might be spoiled at expect all races to be this pretty! It had some rolling hills that were a little rough but for the most part it was flat. I will definitely do this race again next year. 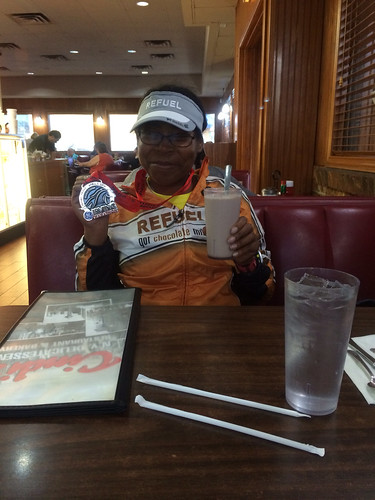 When we were done we headed for pancakes and chocolate milk. We need to refuel our bodies because this weekend is a big weekend. Zooma Women’s Half Marathon and the Austin 10/20! That’s 23 miles folks so it’s necessary to help cut that recovery period in the right way! Lowfat chocolate milk is soo good! 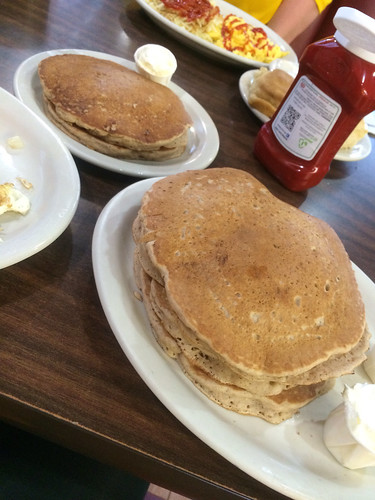 The only bad thing was, we couldn’t eat that much after we finished. Most of the food ended up in a doggie bag. Pancakes are so great after a race! And it’s the only time I allow myself to eat them with sugar free syrup of course. These aren’t so bad though whole wheat with cinnamon! I didn’t eat the butter though.  They always supply too much. 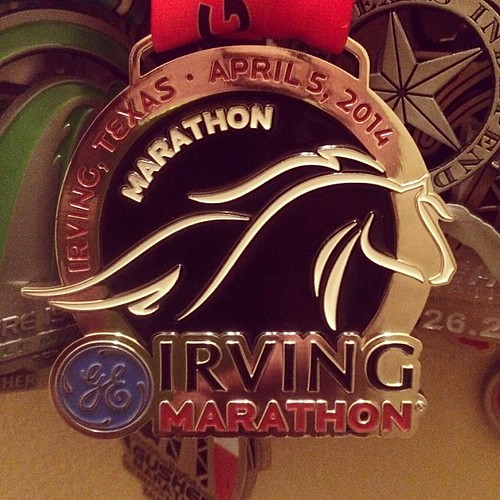 It was a great race weekend and I had a really great time.  This is race for everyone so I hope to see you out there next year! The medal is really cool too! Probably going to hit the 2014 favorite pile!

*I was provided with a half price bib for this race but the opinions expressed in my blog are solely my own.