This week I’ve been focused on being positive because I’ve had a little dark cloud following me around for a couple of weeks.  Positiveness really works because this week has been so much better than the weeks that have passed.  I’m smiling, I’m happy and I’m looking forward to what the future brings…and I’ve just started to look at things differently. 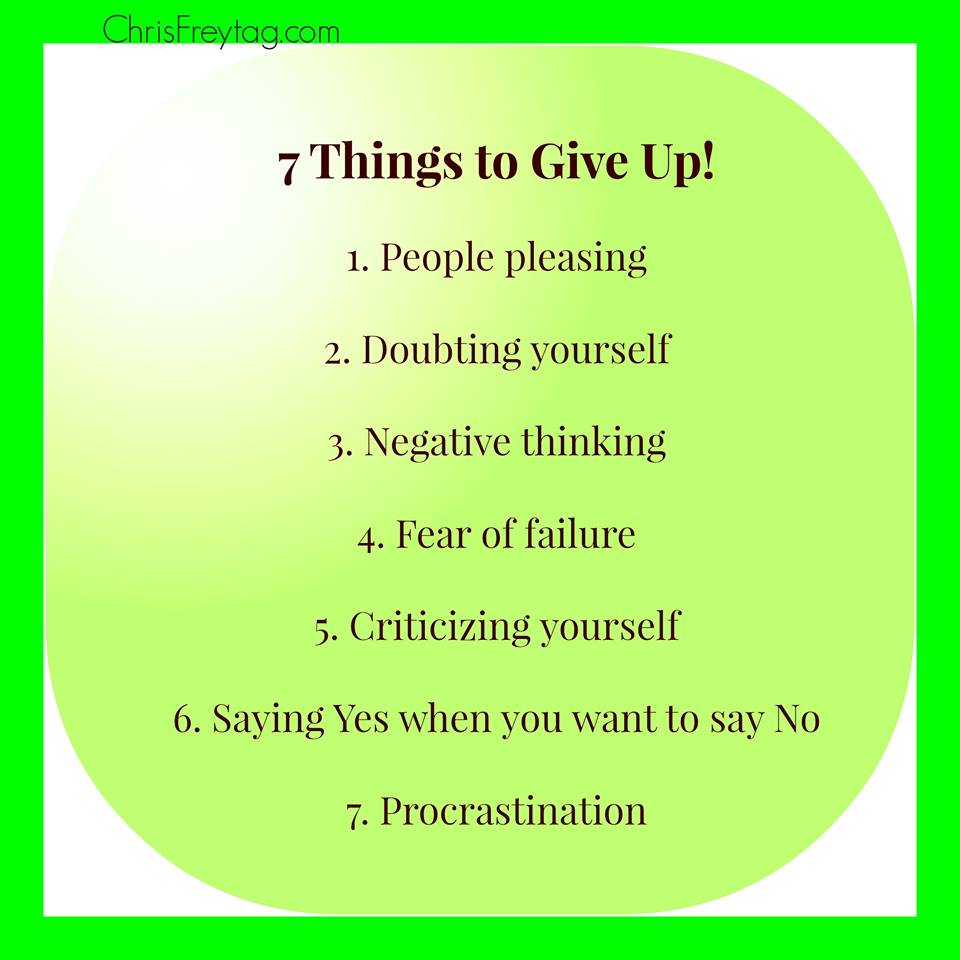 And then I saw this floating around Facebook the other day from Chris Freytag! I know that if I work on these areas my life with head in a positive direction everyday. All of these things are things I struggle with and I see a lot of you responded to this when I posted it on FB.

You know how I am; it doesn’t mean anything unless you’ve said it out loud and/or written it out. I’m huge on accountability so I’m laying out my plan to change right now for you guys to see it AND HOLD ME ACCOUNTABLE!

1. People Pleasing: I always say my main values in life are to be a good wife, daughter, sister, friend, aunt…whatever in life. Where these things are important to me, they shouldn’t be what I base my personal character on. This focuses on pleasing others above myself. Most of my stress in life come from not wanting to let someone down or not being there for them. That’s a huge case of the people pleasing and I will find a way to step away from this. Not by being selfish but finding the happy balance between pleasing myself and pleasing others.

2. Doubting myself: I do doubt myself but this is something I’ve been working on for a couple of years now. For the most part I’ve pushed past my mind barriers and will try a lot of different things, but it still creeps in my mind.

3. Negative talk: I do it, we all do it. We see something we don’t like we say something bad about it. Whether it’s about ourselves, work, other people…it happens. I will fight against the negative talk by focusing on the positive first. Really, I will just take a moment to see the beauty in every situation and dig deep to find the positive even when it’s not on the surface.

4. Fear of Failure: I stopped swimming last year because I wasn’t good at it immediately. I was afraid of failing so I literally put my hopes of being a triathlete on hold because I was afraid of failing. If I don’t try, then I’ll never know. I have reawaken my dream to be a triathlete and my half Ironman dreams! It will be the one thing I focus on so I don’t fail. Failure comes with no preparation or work, and right now failure is not an option in my life. It’s time to live and I won’t let fear stand in my way!

5. Criticizing yourself: This is probably my biggest offense! When I don’t do something right the first time I get upset. When I don’t fit everything in the day, I get upset. I do criticize myself a lot. Worst of all, I sometimes criticize myself out loud. When I doubt myself, I criticize. I am my own worst enemy. Instead of criticizing, I need to work on learning the lesson from each success and failure. This might sound crazy but after I PRed in Dallas, I should have been happy with that but I wasn’t. I was upset that I didn’t hit 2:10 in my half marathon. I criticized myself for everything I did wrong on that path. That did me no good though because when I race another half marathon I’ve already planted the doubt in my head that I won’t do it because of the mistakes I made before. I REALLY need to work on this. I’ve been doing it since I was a little kid which probably means i have some other issues too. But I’ve changed so many other things, I can change this too!

6. Saying yes when you want to say no: I have a hard time saying no to people. I want to be the dependable trustworthy gal. When I say yes, then I overload myself with other things. I want to fix everyone’s problem. I also have a problem with saying no and then feeling horrible about saying no. Even after saying no, I spend time trying to figure out how I can say yes to what I just declined. It’s so stinkin’ hard. But this plays back into being a people pleaser and not wanting to let anyone down. I need to work on saying no without worrying about giving an explanation. I also need to realize that sometimes it’s just best to say no and keep moving to avoid stress and fatigue.

7. Procrastination: I don’t put things off as bad as what I use to do, but I still put things off. This does nothing but add stress to life. This is weird because I’m a huge planner and like to know what’s going on long before it happens. BUT I do put off important conversations I need to have with people because it’s just hard to deal with things. Basically, anything that is truly important but hard to deal with will be put on the back burner until the last possible minute for me to deal with them. I need to start tackling problems head on and not letting it wait until the last minute when everything is a ticking time bomb!

Do you need to work on any of these things? Which of these is your great offense? How will you try to remain positive in your daily life?