I spent last week with quinoa! We fell in love again. Since I’ve been blogging and running and working out I’ve been trying to find new ways to make my meals more yummy and I have an EXCESS of quinoa in the house. It was important that I find something to do with all this quinoa I’ve been hoarding.

First off, people might be wondering: what is quinoa? I’ll give you the easy answer. It’s pronounced like KEEN-WHA; no one ever knows how to say it. Therefore, I think people don’t want to eat it because they can’t talk about it. Quinoa looks like rice but it’s not rice. It’s a grain that is packed with protein and cooks up JUST LIKE RICE! It’s a superfood!

We made a couple of things out of quinoa, but this is the one thing that we LOVED! We definitely will add this into our food rotation. I thought you knew that most people who made a lifestyle change eat the same thing week after week, we’re no different! 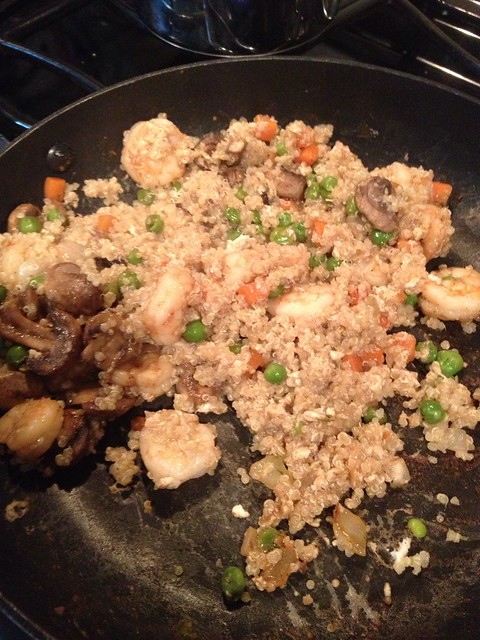 So here is this shrimp fried rice I’ve been talking about for two weeks. I found the recipe on pintrest and then I had to adapt it to my own because 1. I don’t believe in using some of that stuff and 2. I didn’t have some of the ingredients at my house. I made it my own. I hate recipes, but others seem to like them so I must share.

Sauce: (Didn’t make this sauce at all)

I added shrimp into the mix because that was what I was feeling. The original recipe was meatless which I’m totally down for, but my husband is not! I also didn’t use the oil because I don’t really think that is necessary. I just used the cooking spray and went on about my business.

As for the sauce, I only had soy sauce in the pantry which wasn’t enough to make this work. I have a problem with soy sauce because even the low sodium versions have way too much sodium for me. BUT i am huge advocate for Mrs. Dash so I used this marinade to make this dish. No salt, low calorie and delcious, that is all that you need. A little bit goes a long way.

Also, the recipe called for 2 eggs scrambled and I don’t have eggs in the house. I have liquid egg whites and I wouldn’t have put two eggs in there anyway. I just used the egg whites which worked fine. Tip: Pour the egg whites in the pan and let them sit before adding the quinoa. Make sure the eggs form and then scramble and then add the qunioa! The picture above was my first attempt and you can’t see the eggs because I messed up. When I went for round two, I learned tried the tip and it worked much better.

We really loved this dish and wanted to share it with you guys. Let us know if you make it, take pictures and tell us how you adapted it to work for you!

Happy Eating! What is your favorite thing to eat?