It was my 12th half this year, Willie’s 3rd and my best friend Tyson’s first half/race EVER, so I was excited for this race.  It was kind of bittersweet because it was also the last RnR of the year!  I really wanted to end the RnR season with a bang but let me tell you that didn’t happen because it was SUPER hot.  I know when we started the race it had to be VERY close to 80 degrees and the humidity was killing before we even thought about running.

Race day was also the day of my 20 miler for my marathon training and surprisingly I wasn’t too worried about it.  I remember running 18 miles we a big deal for me, but I hardly thought about doing this 20 mile run.  I think maybe I was just so excited for Tyson to be running his first half that everything else just went out the window.  So that was a VERY good thing.  This weekend was about nothing else than Tyson finishing this race…which I knew that he could.  I’m just glad that he wanted to do it.

Our hotel was very close to the start and finish line, but it wasn’t close enough for when we finished the race.  It was very walkable.  There were a boatload of people running this race.  It was people everywhere. 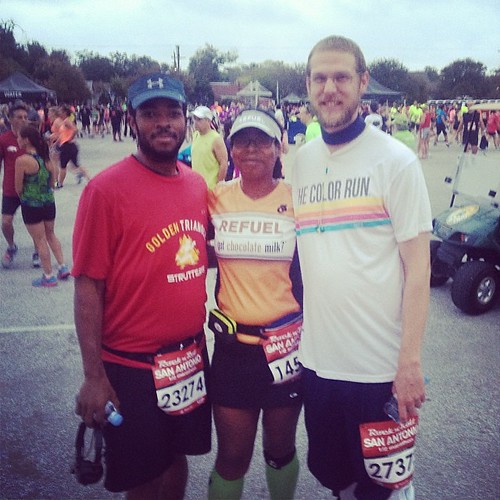 The race never loosened up with people. Usually after mile 3 the crowd starts to thin out, but no in San Antonio. It was like pigs in a hot blanket the entire 13.1 miles. From the start people were walking and I knew this wasn’t going to be good. I couldn’t navigate the crowd but Tyson was handling it like a champ. I was following behind him for the first 7 miles because he was weaving the crowd like a champ. Around mile 6, we entered into the zoo and Trinity College area which was the best part of the route because the crowd was amazing. What wasn’t amazing were the KILLER hills happening for 2 miles. Everyone was stopping to walk and there was no way I running those inclines. This is where I lost Tyson because I stopped to take some pictures and help a lady who tripped so she wouldn’t get trampled by the running pack. 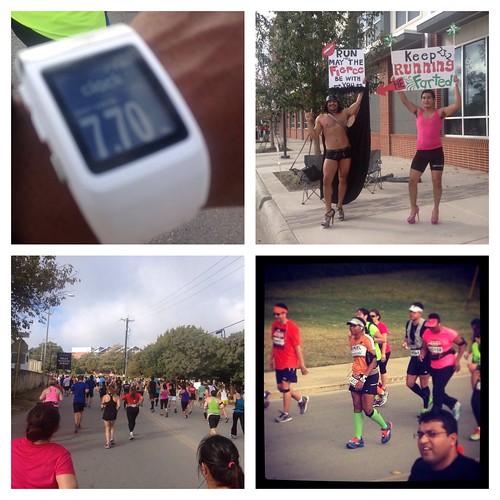 It’s sad to say but I never saw Tyson again after mile 7.70 when I nearly died on the course and I had to walk. I was feeling the heat, the previous miles and everything else. I wanted so badly to cross the finish line with Tyson. It kind of made me sad! But I figured it wasn’t going to happen so I had fun on the course.  I stopped to take some pictures.  The guys in the high heels were my favorite.  I also stopped to dance with some cheerleaders around mile 8 or 9 and slapped plenty of hands a long the way.  At this point, I thought Tyson was way ahead of me.  At mile 11, I looked at my watch and it said 2:07 which wasn’t bad because I thought I was way worse than that but I knew I wouldn’t be pulling a 2:1x anything, but I was fine with that.

This was a training run for me and I definitely had to push past some mental boundaries.  My legs were feeling like rocks but I kept them moving.  I walked a little bit but not a lot so I am really happy about that.  I was forced to walk toward the finish line because people were walking 6 across on a narrow street.  I have NEVER seen people in the last half mile of a race content with walking to the finish line.  At the end the energy is usually high but not in the race.  San Antonio killed some butt and everyone had accepted it.  I finally made it past the walkers and was able to run to the finish line.  It was a happy moment for me. 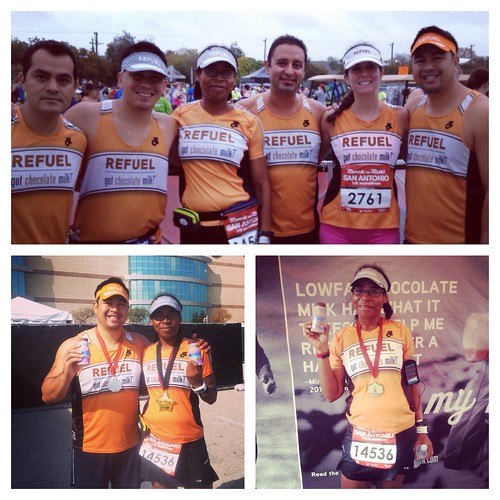 I was really ready for my chocolate milk.  I needed to refuel after that hot sweaty run.  I am so blessed to be apart of Got Chocolate Milk Team Refuel. I love all of my team mates and these people have really become my some great friends to me. I look at us as a GROUP of extraordinary people doing EXTRAORDINARY things. It’s hard to stand out in this group because everyone is doing something amazing! I am proud to be apart of this group! And it’s always great being at these races with my friends and team mates from home.  This race may have kicked my butt but I enjoyed every minute of it. 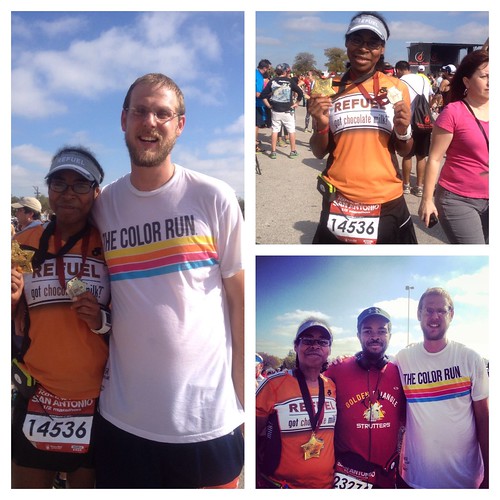 In the end, Tyson finished his race in 2:28, I finished in 2:32 and Willie finished in 2:52:59. Yes, Tyson was the only one to meet his goal and I’m wicked proud of him! He worked hard for it and really wanted to do it and he did. He’s amazing! I know he feels great about finishing his first 13.1. I bought him a sticker at the expo to put on his car and I got him a shirt and the finish line so he could always remember the moment. He may not realize it yet, but those are defining moments…you know crossing the finish line, getting that medal and knowing you can do it. No one can take that away from him because he did it by himself. He told me he couldn’t have done it without me which isn’t true. He wouldn’t have wanted to do it without me but he could have done it! I just overloaded him with tons of information so he wouldn’t make the same mistakes I made on my first half/race. He trained and ran that sucker on his own and I am proud of him! 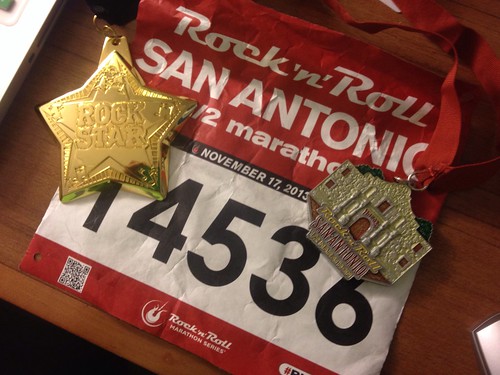 At the finish line I got my Rockstar medal for completing 5 Rock n Roll races this year. I was so happy to get it! I had never run a Rock n Roll until Dallas when Jeremy talked me into it and now I’ve really become a fan. Rock and Roll has allowed me to see the USA and meet some great people. These races have taught me a lot about myself. I got my PR in Dallas, San Diego was Willie’s first half, Philadelphia was the first trip I’ve ever taken by myself, Denver was an altitude challenge and taught me that every race doesn’t have to be the best time, sometimes it’s just about finishing and San Antonio was really just about having fun! 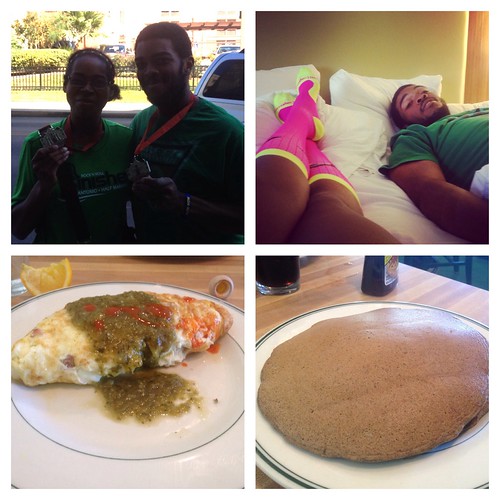 After the race, our friends had to head off so Willie and I headed to the Magnolia Pancake Haus and chowed down on egg white omelets and buckwheat pancakes. Then we went back to the hotel and I put on my compression socks and we just hung out! It was the perfect ending to a great day!