If you haven’t been keeping up with me on social media, you have no idea that Willie has been in the hospital.  He’s been dealing with stomach problems for a while now but lately it’s just gotten worse.  The past 9 days have kind of become unbearable for him so when we got back to town he went to the doctor…who then sent him to the emergency room. 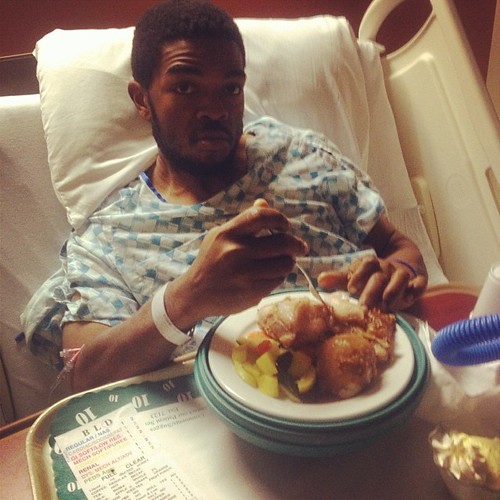 He had a a few  gall stones blocking his bile duct and one was rather large.  They sucked those suckers out yesterday.  Today he had his gall bladder removed and he’s feeling much better.  When his liver levels go back to normal he’ll be able to go home.  He ate for the first time since Monday and he seems to be on the mend. Some people have asked me about how he got gall stones since we’ve cleaned up our diet.  I’m pretty sure this was years and years in the making but the doctor also told me that his weight loss was probably the cause.  He says it’s the one down side of losing the weight.

That is reason I haven’t posted anything on the blog. I’ve been trying to take care of him, work and myself.  All in all, I’m exhausted but I’m glad that Willie is feeling better.  Hopefully things will get back to normal soon.  Until then, I thank everyone for their kind words and prayers for Willie.