My best friend Melissa is a sucker for chocolate.  I told her about these races and I was pleased to see one coming to Austin so I asked her if she wanted to do a race.  Of course, she was happy to do it.  She will run for chocolate. 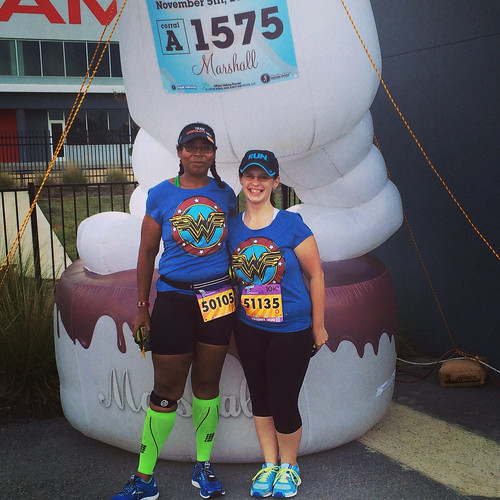 I like running 10K because it’s short of “longish” for a run!  I woke up Saturday to run 6.5 miles before the race so I could get my miles in.  This wasn’t anything serious for me.  I was really doing this race for fun and to hang out with my friend.

We got there pretty early so we had plenty of time to take pictures and buy some stuff.  Melissa’s sisters-in-law also ran the race which was nice.  SPOILER ALERT: The best thing bout this race was the company.  I really enjoyed hanging out with these girls and the time was cut way to short.  Can’t wait to hang out with them all again! 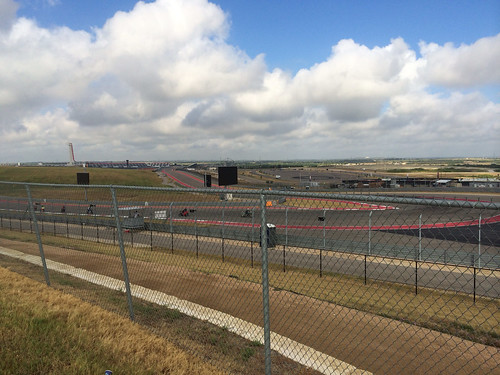 The race was held at the Circuit of Americas and it was live track.  That was cool seeing that during the race.  Because when you are running through fiery pit of hell, you need something to distract you.  The 10K started at 8:15 am.  That’s too late for a race to start in September in Texas.  Secondly, half of this race was on rocks.  They said it was gravel over a dirt road but let’s call it what it was: rocks. Not really a safe situation for people to run on, especially when you have to run up hill. 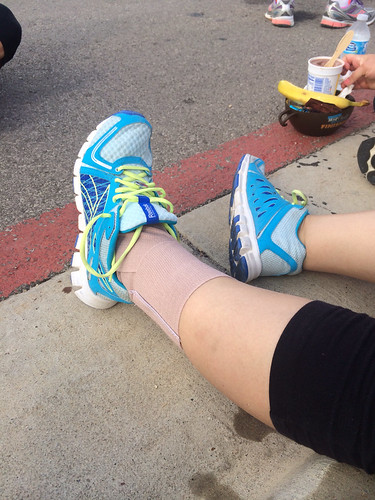 Many people fell down and hurt themselves, including my lil Melissa.  I was trying to run with her so I would run up and then I would run back to see her.  When I found her the first time, she was in tears because she had fallen…she was hurt!

It was hot! It wasn’t fun.  I would have rather done two loops of the course instead of having to run on those rocks.  Since I”m still trying to get over my knee thing from Denver, I wasn’t jazzed about seeing this.  They should have told people beforehand the course was going to be like that.  Rocks = walking because I didn’t want to hurt myself anymore.  I’m trying to run Marine Corp next month! 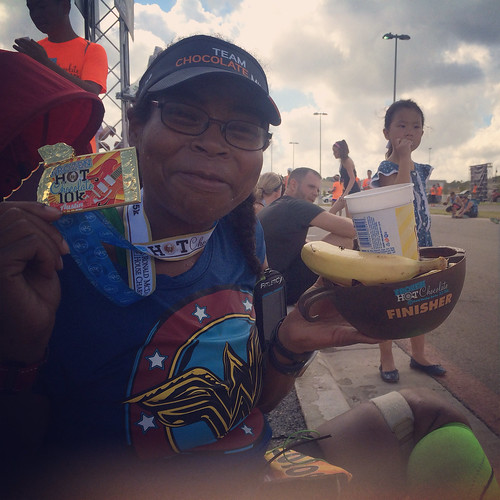 When it was done.  We were gifted with chocolate and things to dip the chocolate in.  I dipped my banana and pretzels in it and it was delicious but most everything else I gave away (rice crispy treat, marshmallow, graham crackers and probably something else in there I didn’t see). The medal was super cute though.  I love a good medal.  It was big too for a 10K. I ended up finishing in 1:28 which is about 30 minutes slower than my normal 10K BUT I ended up going something like 7.10 miles with going back and forth for Melissa!  I just didn’t want her to finish the race alone! 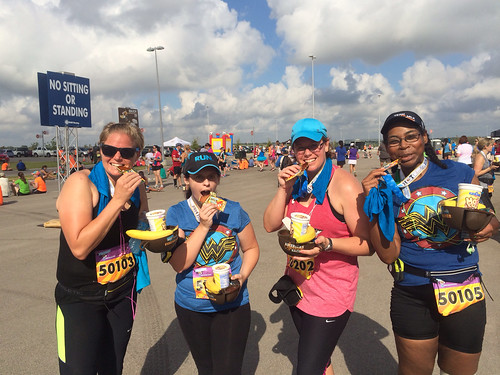 Would I run this again?  The perks were good but the course sucked. In our bag we got a pretty good tech tee race shirt and a pair of good quality sunglasses.  If I would have ended up in Melissa’s position, I would be VERY upset right now.  If they loop the course, I’m all in.  But like I said, the best part of the race was the company which trumped every bad part of this race.