In life there are rule followers and rule breakers. I’ve always been a rule follower. I was a good kid that hardly broke the rules and if I did happen to break the rules, I felt terrible. I punished myself! It’s always good to follow the rules but I also think it’s put me on a path to only want to follow rules and think about the consequences. It’s stopped me from being a risk taker.

I’ve lost all this weight which has really forced me to get to know the “new” me. I do feel like I can do anything because I’ve overcome this huge battle with “fat” but I am still cautious. Losing the weight wasn’t a risk, it was something I wanted to do. Like the many times I tried before, if I didn’t succeed I would just keep on traveling the same path. But this time I stuck with it and made it happen. Now I’m willing to try more things because I wasn’t really living life before, I was just surviving.

I’ve become a runner. I love to run. I love the athleticism, endurance and just the fun behind it all. What I love about running is I can push myself each and every time I run to accomplish more or I can just go for an easy thing. It’s what I love! A few weeks back I decided to I wanted to try trail running. I wanted to do a night time trail race but I had never even run on a trail before.

I talked about it and committed and the next day I would chicken out. Tree roots, rodents, dangers out in nature all detoured me. I was afraid. I was afraid of falling, hurting my self and getting bit by a snake. I have a thing about snakes. Maybe night time trails weren’t for me, so I signed up for a day time race. I still contemplated not going to the race because of all of my fears. I didn’t even want to tell anyone I was going to do it just in case I chickened out and didn’t go. I didn’t want to fail or not do it and have everyone know. This kind of was a BIG deal for me.

Accountability is a good thing and this is a good reason why it’s important to have an accountability partner in life. By not saying anything to anyone no one knew and no one would have called me on it. I didn’t speak about it until two days before and when I said it out loud, I knew I was committing to it.

I was nervous before the race but I played it off very well. I wasn’t worried about time because I knew I was going to do this slow. Plus, a friend told me it would take me a long time to run the trail compared to my road time. I was expecting to be there for a while. But I felt weird because I had on new trail shoes and everyone else’s shoes were so dirty. I had only worn mine to work to break them in. I felt out of place. 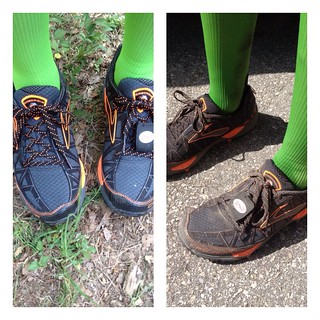 By the end of the race my shoes were definitely broken in and plenty dirty. Trail running virgin no more! I didn’t even realize I was sweating so much until Willie told me I had soaked my compression socks. That’s never happened before. I could literally wring out my clothes due to the sweat. I’ve NEVER sweat so much before in my life, not even when I was pushing 350 lbs. 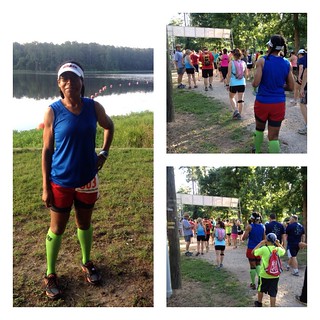 The race was the hardest thing I’ve done to date. I was afraid to do it and was worried about falling and breaking an ankle. This was new territory for me. I am a road runner! The first 2 miles I hated it. I almost turned off on the 5K split but I knew I would regret it if I didn’t do the entire 15K. I kept pushing and met some people along the way. At mile 3.50 I met Maddy who has been training for this race. We chatted and she encouraged me. That is what I needed because I kept going and it became fun. In the moments when I wanted to give up, she was right there with me. I told her she was my angel that day. Around mile 6, we picked up Jason. He needed his own encouragement at that point and this time I was the person pushing him. We chatted and ran and pushed to the end. We all finished together and it was great. It wasn’t about the time for us, it was just about making it to the end. This is one experience I will never forget! 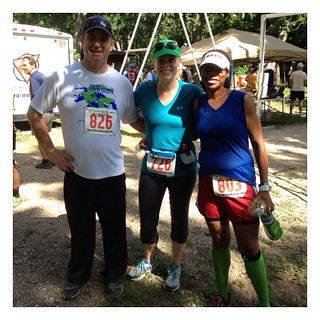 Like I said before, time wasn’t important but I did the 15K (9.38 miles) in 2:04:05. Yes I was taking it very slow but it was just a big deal for me the finish. There were no medals at this race but there was a pint glass at the end. A very nice glass that I will cherish just as much as those running medals. Yesterday I overcame a huge fear and kicked it in the nose! And of course, there was chocolate milk when I was done! 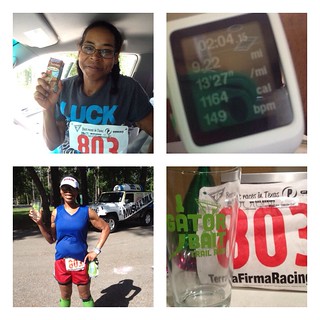 The moral of the story is:  don’t let fear guide you through life.  You only get to live once so why not make the most of it and live with no regrets.  So what’s a fear that you would like to get over?