There are a few things you should know before you read this recap.

2. I got up early and ran two miles before heading to the start line. I’ve never ran 15 miles before, ever.

3. Even though it was just supposed to be a training run, I put my race face on and was ready to roll.

4. I shouldn’t have done that because ALTITUDE is a horrible thing and it will sneak up on you! 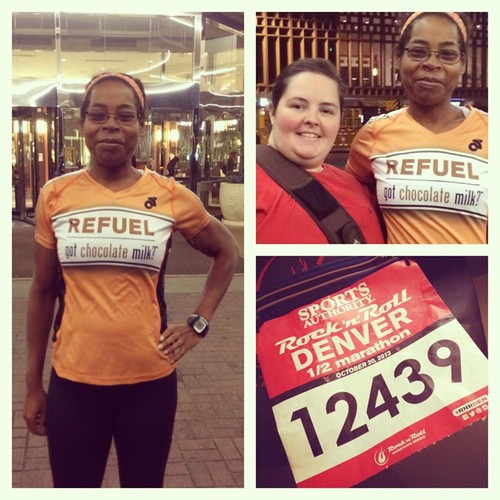 I woke up early to run my two miles and eat my breakfast. There were a lot of things off about this morning but I was rolling with them. I had been trying new things to eat before runs and they had worked out well for me so I thought I was going to be ok. I had ran my two miles on the treadmill inside and I was drenched when I was done. This is the cue I should have taken about the altitude but I just thought it was because I was a little tired and had not fully woken up. I ate breakfast too late. The walk from my hotel to the start line took like 10 minutes, if even that. It was pretty close so I appreciated that.

I’m glad I didn’t have to use the bathroom because the port-o-potty situation was similar to San Diego. Too many people using too many potties and not enough time. I definitely learned my lesson from San Diego and I make myself go several times before a race just in case. 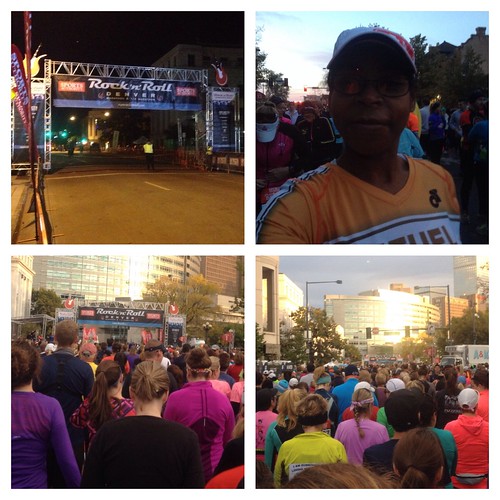 Still I was very optimistic about this race because everything seemed really normal. I had a great attitude and really thought I was going to do well. I had that attitude until mile 4 and that’s when I started to feel the altitude. I heard that training in the humidity was good training for elevation and I had done plenty of that this summer. I think if I hadn’t done all those humidity runs this would have turned out a lot worse. The weather wasn’t as cold as what I expected, but it was still cold. I started the race in gloves and around mile 2 I was able to take them off for a while, but then the wind kicked in. This is the point where I can show you the video!

See I was very positive in the beginning. The race started a little late and I was back in Corral 12 so it took about 25 – 30 minutes before I actually reached the starting line. I met some nice people in the corral, most of them were marathon runners though. I started strong and did the first 5K in an OK time. I was hitting my “B” goal of not starting out too fast. After mile 3 though we went on an incline and it was pretty steep. At mile 4, I started to feel it but I was ok. This was my time to take my GU but I noticed I lost one of my two GUs. That was a huge MISTAKE! I took my first and only GU at the 45 min mark, luckily I had half a pack of shot blocs for later.

Things were going smoothly until about mile 10 when I wanted to cry! I knew my time was off and I was a little disappointed. I knew I wasn’t going to make it anywhere close to my “normal” half marathon time. I really wanted to kick this race in the face. At that moment I gave myself a pep talk. I said to myself, “You can either be one of those people that gives up right now and suffers through the end of the run or pull it together and push on through.” This was a defining moment for me. I decided at that point it was OK to walk to the parts I couldn’t run and run all the parts that I could. After all, this was supposed to be a TRAINING run for me and not really a race.

So I kept on pushing through but my body was lacking the fuel because of my dropped stuff. I knew this could have gone a lot easier if I was fueling properly. I took water and Gatorade on the course and I usually don’t do the Gatorade but I had no choice this time. It kept me going. The last 3 miles were the longest for me but I found myself running up the inclines and deal with the elevation. Finally at miles 12 I kicked it in even though I was having a hard time breathing but I wanted to finish with the same attitude I started with: positive…and I did. I ran in strong and happy. I was smiling and felt good when I crossed the finish line. I almost forgot to get my medal. I was VERY proud of myself in the end and this showed me that I had the mental strength to make it through a hard situation which is definitely needed for a marathon I would guess. 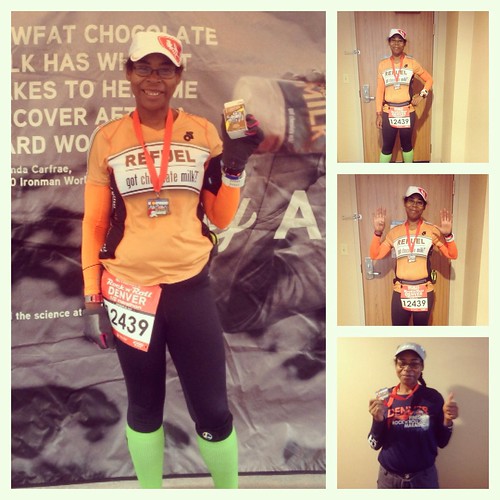 There weren’t many bands along the way which was kind of sad. The crowd support was awesome though. The route was great and I was glad I got to see parts of Denver I never would have seen. The park loop was my favorite! 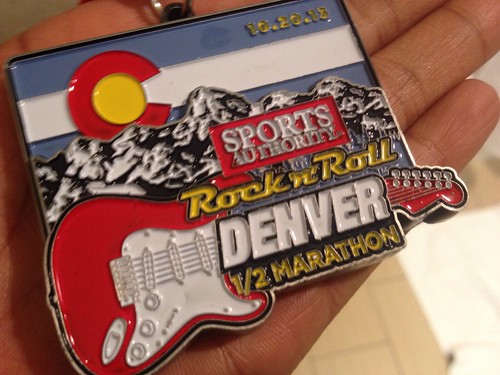 Highlights of the race:
1. The woman holding the “Sea level is for sissies” sign. I stopped to hug her because I was struggling. She told me I was doing great and to keep pushing on!
2. Seeing Junior a couple of times on the course and him screaming my name. He doesn’t know it but he always appeared when I needed that extra push. It helped!
3. The guy laughing at me while I was filming myself on the course. He totally was laughing when I said I was dying but he ran with me for a good portion of the race to keep me motivated!
4. The moment when I totally had to pep talk myself. That was also the moment I realized that I will bring more than extra refueling stuff in my next race!
5. I couldn’t feel my hands at the end of the race. I had to take my picture with my chocolate milk and I had to have someone pull my camera out of my pouch because I just couldn’t feel it. The same thing happened when I bought my finisher t-shirt when I had to pay. And again after I got back to the hotel and my mom was taking my picture and I was holding up 9 fingers, I could barely bend my fingers. That’s why it looks like a bear claw!
6. The medal is freaking cool! 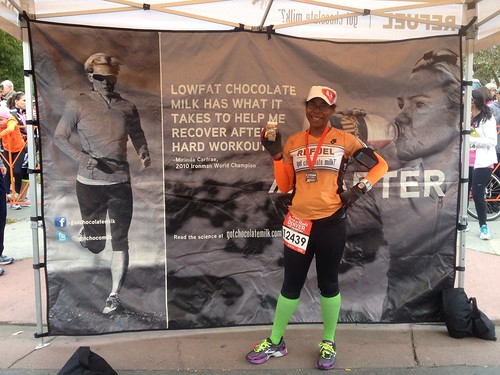 Let me tell you, I was glad to get this chocolate milk at the end. I really needed it! Training still goes on and there’s another race this weekend. I need my body to repair and stay strong because it’s almost marathon time! 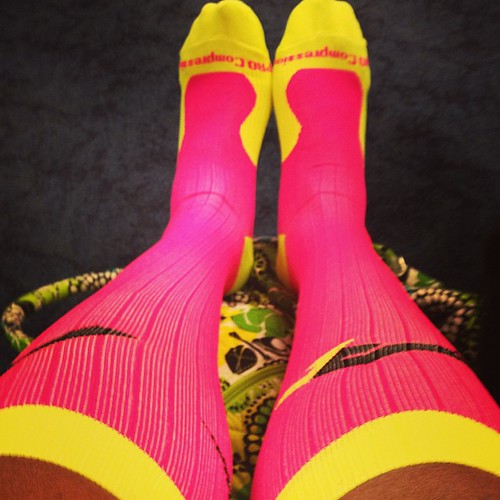 After the race I had to immediately get back to the hotel to pack up my stuff, shower and catch my plane back to Texas! I was totally rocking my new Pro Compression socks in the airport! Those socks are so freaking great, I wish I would have gotten more at the expo, now I just have to order them online! I totally recommend these socks!

Will I do this race again? Maybe! The jury is still out mainly because this falls on the same weekend as the Runner’s World Half Marathon weekend and that’s something I really want to do. This race kicked my butt, but my first thought after crossing the finishing line was I want to come back next year to really kick this race in the face! Only time will tell and it really just depends on the schedule. I had a great time in Denver and really enjoyed the race even though this was the hardest race I’ve ever run.

My 9th half marathon of 2013 is complete.  I have 3 more half marathons and my first marathon left for this year!  This week is low mileage week on my training plan because it really kicks in next week!

What is the race you really want to run?