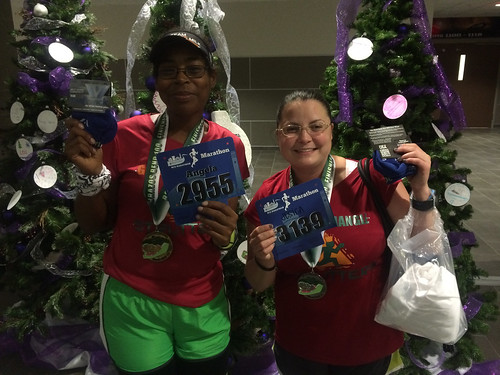 Everyone was eyeing us because we already had medals on.  It was kind of awkward but funny.  We decided to take a picture by the tree.  At this point we had been in the car for almost two hours and we were starting to stiffen up.  That was the only thing that had me worried about running another marathon.

We checked into the hotel and grabbed some grub but we had to prep for the race the next morning.  I always have a hard time sleeping after marathons but I was forcing myself to sleep that night.  BCS Marathon started at 7am but it was a mile from the hotel and there was plenty of parking.  We didn’t have to get up too early but I did anyway. 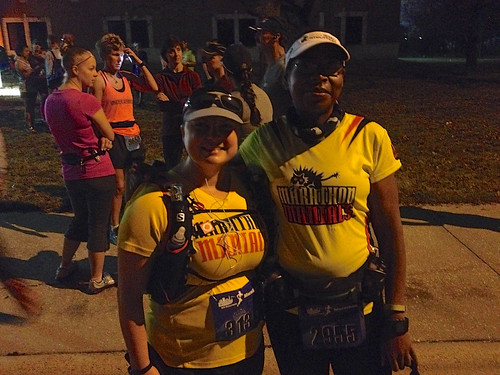 We arrived early and used the portolets.  I’ll spare you a very nasty experience from Jes.  Just know it wasn’t awesome.  Jes seemed really nervous about running the race.  I tried to calm her nerves.  My mind set was we were already there and committed to do so there wasn’t really much to worry about.  We just needed to get it done. 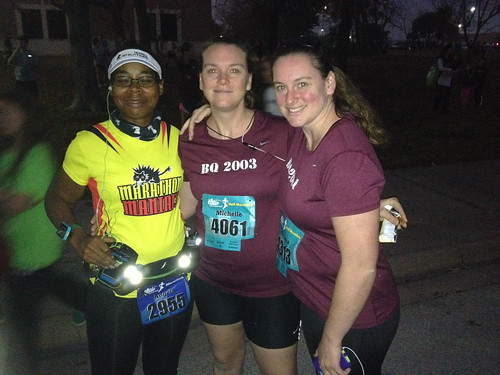 I met up with some old friends from high school which was pretty awesome.

And then the race started.  My hamstring had been bugging me but it wasn’t hampering me from running.  Other than that I felt fine.  I was ready to run, until we started running and it was extremely humid.  After the first mile, I found the 5 hour pacer and I told him I was going to stay with him.  But he looked like he was moving slower than I wanted to move, but I stuck with him for a few miles.  But when we broke away from half marathon people at mile 3.5, I decided to leave the pacer and just do my own thing.  At this point, I was wishing it would rain so the humidity would back off a bit.  I wasn’t prepared to run in conditions like that. I was worried it was going to be like that the entire race.

The streets of Bryan were not my favorite.  The streets were a little torn up but I just watched my step and kept pushing.  I had to turn my timer on pretty early on in the race because I didn’t want to struggle.  I thought it was the best option for this race.  I was armed with my fuel, GU every 40 minutes and a salt tablet every hour.  I was feeling pretty strong.  I was finding people to pace with along the way and thought I was doing great until I realized the two guys I was trying to keep pace with were MARATHON RELAY people.  That’s not a bad thing but they didn’t quite as long to go as I did.  I was kind of cursing myself for that but I didn’t know and I didn’t think to look at their bibs after the split.  I didn’t even know there was a marathon relay.

I crossed the half marathon mark at 2:25 which is 11 minutes slower than my Memphis time the week before.  I wasn’t shooting for a PR and at this point I knew I wasn’t going to come close to it. I didn’t expect to run anything less than a 5 hour marathon.  I really just wanted to reach the end without being dead.  The timer was working well for me but the wind started to pick up.  The wind gusts were pretty gusty.  I would take that instead of it being humid.  We began the run on some country roads which were my favorite parts of the run.  I really enjoyed it.  I felt at peace in those moments.

I don’t remember much about what happened after that except it was WINDY.  The course took us through Texas A&M University which was nice because this was all stuff I hadn’t seen before.  We had to run over a couple of curbs and I thought I was lifting my feet but I guess it wasn’t.  The race was filled with some rolling hills but nothing major.  I was kind of worried about the downhills because of my Revel Rockies experience.  I just tried to control my speed on the way down. 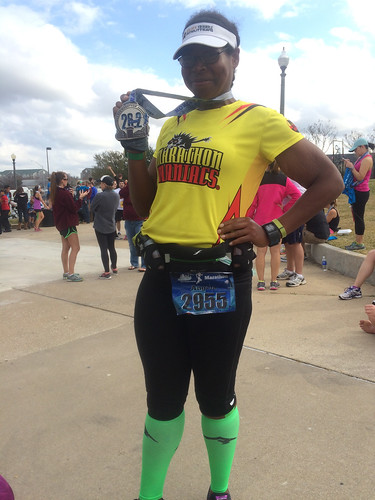 I finished the race in 4:57:25 which was fantastic.  If it wasn’t windy I know I would have came in at 4:48.  I just got lazy and didn’t want the fight the wind.  In the last 4 miles, I walked a little too much because i was kind of getting knocked over by the wind.  The miles from the day before were starting to hit me and I just couldn’t fight it anymore.  I let it get the best of me!  It was still a great time for me.  It was 2 minutes off my PR from the week before which made me feel great. 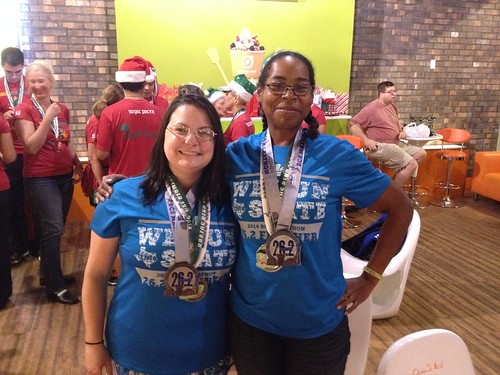 This race was really great.  It was my first time running this race.  The swag was great.  We got a cotton long sleeve shirt and swiftwick socks.  When we finished the race we got a technical finisher shirt and a great large medal.   The aid stations were great and fully stocked with everything a person would need. The people were friendly and the course was excellent.  I am definitely coming back to run this race.  It was great!  I recommend this race to everyone who wants to run a fast course.

With this race came the end of my 2014 racing season. This was my 13th marathon of the year! I can’t believe I ran my first marathon in January and here it is in December and I ran 12 more marathons. I leveled up in my Marathon Maniacs status in one weekend. I had been working all of the fall season to make it level 3 but in one weekend I made it to level 4. All I can say is I am happy! I’m proud and I can’t wait to see what the 2015 holds for me.