The biggest piece of advice we can give you is to stop dieting.  It’s not a diet; it’s healthy lifestyle CHANGES to lose weight and keep it off. A lifestyle change is very difficult, especially for the people in your life.  We had so many problems with our friends and family because it wasn’t only a change for us, it was a change for them too.  Both Willie and I were overweight our entire lives and our weight defined us.  When it was time to make a change things did get very sticky and possibly people didn’t take us too seriously. 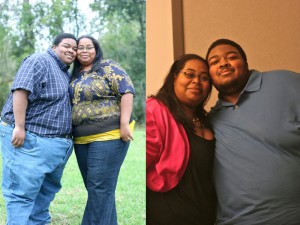 For people who don’t eat healthy or care for “clean” living, what we were doing was a shock.  Food is a social thing.  Family meals, date nights, reuniting with friends, parties, holidays…all of these involve food.  The first thing people couldn’t accept was eating out isn’t something we could do on a REGULAR basis.  The truth is many restaurants don’t have nutritional information available and most that do don’t have healthy enough options for us.  Just because a restaurant does have that information available doesn’t mean it’s suitable for a person watching their food habits.  The people in our lives were just so use to us eating whatever and whenever that it did cause some tension.

As mentioned before we would rather sit at a restaurant where friends want to eat and not eat anything than cause a huge discussion on where we can eat.  It’s just not a battle we want to engage in because eating out limits the places we can eat and feel comfortable.

The beginning was a very difficult time for us because it was hard for people to adjust to the new us.  There were times when we felt alone and isolated, but we were fighting the good fight.  I won’t lie, some relationships were severely fractured because of our lifestyle change.  Not because these people didn’t support us; mainly because the transition was quick and hard.

People did question everything we ate and the amount of food we were allowing ourselves to eat.  They didn’t understand our need for exercise and questioned whether missing one workout was really that big of a deal.  People thought we were being obsessive about the situation which I found very funny.  No one ever questioned what I was doing when I was overeating on fast food.  No one ever said I was being obsessive about sitting on the couch for hours at time watching television…while eating.

I feel like these questions and accusations were coming out because they felt guilty for not making the healthy choices in their lives.  By us doing this, they may have thought we were judging them on their own behavior.  When we decided to change to the healthy side, it was s shining spotlight on their own habits.  Making a lifestyle change is hard enough; I promise we didn’t have time to worry about other people’s habits.  There was/is definitely no judgment coming from us on this point.  This was something we chose for ourselves and we never tried to push it off on anyone else (unless they expressed interest in a change and asked for help). 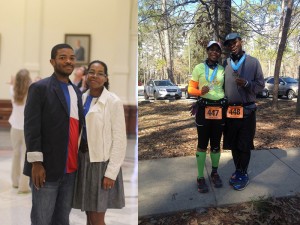 That’s the most important thing you should remember when changing your lifestyle.  This is a journey you are taking on your own, so don’t expect others to walk with you or even support you.  Don’t forget your new habits on others and definitely don’t talk down to people or preach to them about their lives.  If you do that people aren’t going to want to be around you.

Also, don’t let people drag you down. Make your decisions and firmly stick with it.  If you don’t want to eat cheeseburgers and friends, you don’t have to.  If you want to work out, don’t let anyone stop you.  It’s your life and the biggest influence over you is you.  People will support you, but there are people out there who want to you fail.  Don’t let anyone derail you from achieving your goals because of peer pressure.  We are all better than that and if by chance you do fail, remember tomorrow is another day and you get to start over again!

After running the Austin 10/20, Willie and I were honored with state resolutions on the floor of the Texas State Capitol.  Our weight loss achievements are now a part of Texas state history!  This is/was such a honor for us and definitely a moment we won’t forget.  We were honored alongside our friend Richard and Amie James (for creating a healthier community by creating The Gusher Marathon), Iram Leon (for winning the Gusher Marathon while pushing his daughter and just plain winning at life), and Felix Lugo (who ran his 50th marathon holding the American flag at The Gusher).  We…

END_OF_DOCUMENT_TOKEN_TO_BE_REPLACED

Dear Subway: We love you Subway because you allow me to eat fresh on the go! You’re our go-to meal when we travel the roads because we still need to be healthy when we’re away from my home. Subway has been a huge part of our weight loss success and we will own up to that. We may not be Jared, but we have our own weight loss story which Subway helped us along the way too. (May I mention that we love that most Subways are open late too! Angela recently got herself into a pickle while traveling, but…

END_OF_DOCUMENT_TOKEN_TO_BE_REPLACED

Lose It! has been the main phone app we have used to lose weight. This app is not only a way for individuals to keep track of their diet and exercises routines but this is the app we used in our weight loss journey.  An August 2010 study by Kaiser Permanente shows people who logged their food in a food diary were more likely to lose weight AND keep it off! “This study shows that if people use quality weight management websites consistently, and if they stick with their program, they are more likely to keep their weight off,” said…

END_OF_DOCUMENT_TOKEN_TO_BE_REPLACED

“I’m going to start my new diet and workout routine on Monday.” This is a statement that many people including myself have uttered at one time or another. Sometime during the week before, we make a conscious effort to get our plan in place. We write out what we’re going to do and what we can and can’t eat. We’re excited and are so ready for that upcoming Monday. My question to you is: Why wait until Monday? There’s six other days of the week. Any day is the “perfect” day to make a plan of action. Start today if…

END_OF_DOCUMENT_TOKEN_TO_BE_REPLACED

The first question people always ask is about what we eat.  What we is important, but I think the real question should be how much do you eat.  Portion control is something everyone struggles with, even if you don’t realize it.  The rest of the world labels Americans as hungry because we’re always eating…and overeating.  That portion on your plate at your favorite restaurant is more than likely two servings of food, but most people eat the whole plate without even thinking of that. We are constantly asked about what we eat when we are out and our response is…

END_OF_DOCUMENT_TOKEN_TO_BE_REPLACED

Losing a significant amount of weight is a huge task so if you’re deciding to take on the battle, congrats to you. We woke up one day and just decided to lose the weight, but I don’t think we were very smart about the process. This is your chance to learn from our mistakes. You know the commercials always say “consult with a doctor before engaging in any physical activity or diet plan?” You should definitely do that because we did NOT and it opened up a huge can of worms for us. It took a lot for me to…